Five Best Desktop Music Players. Hive five News, Videos, Reviews and Gossip - Lifehacker. How to (Legally) Boost Your Music Library Without Spending a Dime. Free yes but I don't think that'd constitute legal compared to the methods in the article. There are (arguably) easier ways to go about doing this, and such action is quite dubious legally. I'm not preaching to you, just sayin... It's really no better than pirating music directly. You don't own the video (or the audio associated), so you are not supposed to have a permanent copy of either. I've told my dad and sister this and they're skeptical for whatever reason; it's just that this method doesn't seem like piracy since piracy is all done on torrents (people think). Years back I used to do this, but then I realized it was dumb - and not right. If you're gonna do it, just do yourself a favor and look to file-sharing sites first because if you're going to pirate music, you might as well get decent audio (Youtube is getting better with their video and audio upload quality, but when I did it, they didn't even have any resolution options, let alone HD ones, meaning the audio was poop).

What’s the Difference Between All These Audio Formats, and Which One Should I Use? Top 10 Ways to Upgrade Your Music-Listening Experience. A few things from the article to address: For PC users, Mediamonkey is almost without rival for organizing your files. 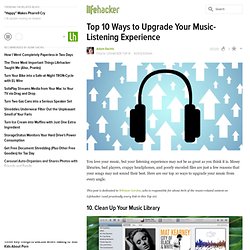 It tags album art and other metadata straight from Amazon. One click. Even if you prefer to use another player, at least try MM as an organizer. Secondly, the suggestion of a USB DAC is spot-on. Fine - three things: Get some actual speakers. Also, there is no shame in using lossless or lossy. Alpha Geek: Whip your MP3 library into shape, Part I - Level the volume. 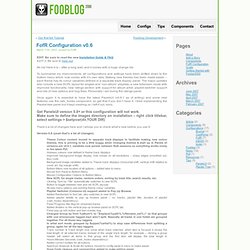 Here it is – after a long wait, and it comes with a huge change list. To summarise my improvements, all configurations and settings have been shifted down to the bottom menu which now comes with it’s own tabs. Making new themes has been made easier – each theme has its colour variables defined in a separate track display panel. The major updates also include a new SCPL layout for singles and ‘non-album’ playlists; a new fullscreen mode with improved functionality; new ratings section with support for album artist; playlist switcher support and lots of new options and bug fixes.

Once again it is essential to have the latest PanelsUI (v0.8.1 as of writing) and some new features use the cwb_hooks component, so get that if you don’t have it. Get PanelsUI version 0.8+ or this configuration will not work. There’s a lot of changes here and I advise you to check what’s new before you use it: The Ratings Panel.

The coolest software EVER!!! Man, am I a geek to be so excited about this.... you have no idea. 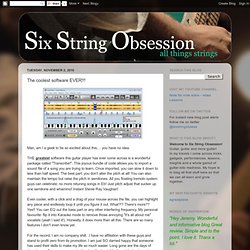 THE greatest software this guitar player has ever come across is a wonderful package called "Transcribe! ". This joyous bundle of code allows you to import a sound file of a song you are trying to learn. Once imported, you can slow it down to less than half speed. The best part: you don't alter the pitch at all! You can also maintain the tempo but raise the pitch in semitones. Even cooler, with a click and a drag of your mouse across the file, you can highlight any piece and endlessly loop it until you figure it out. For the record, I am no company shill. There is a free, fully- functioning demo to boot: Putting on my teacher's hat for a moment - ANY guitarist who is serious about improving MUST learn to use their ears to figure out songs.