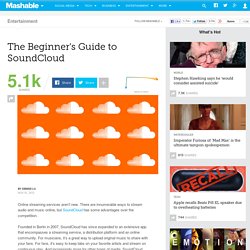 There are innumerable ways to stream audio and music online, but SoundCloud has some advantages over the competition. Founded in Berlin in 2007, SoundCloud has since expanded to an extensive app that encompasses a streaming service, a distribution platform and an online community. For musicians, it’s a great way to upload original music to share with your fans. For fans, it’s easy to keep tabs on your favorite artists and stream on continuous play. And increasingly more for other types of media, SoundCloud provides a way to stream embeddable audio pieces for news and sports media outlets. There are three subscription levels to choose from with SoundCloud. Once you decide what’s best for you, getting started with SoundCloud is simple. Signing Up Signing up for a SoundCloud account allows you to take full advantage of all of SoundCloud’s features, including customization and personalized statistics. 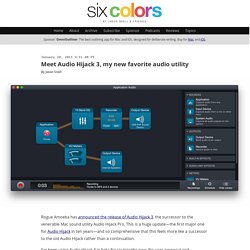 This is a huge update—the first major one for Audio Hijack in ten years—and so comprehensive that this feels more like a successor to the old Audio Hijack rather than a continuation. I’ve been using Audio Hijack 3 in beta for six months now, for uses personal and professional, and I couldn’t be more impressed. This is a beautifully designed product that combines a clever and intuitive user interface with awesome power and versatility. Audio Hijack: Record Any Audio On Mac OS X. Record any audio, with Audio Hijack! 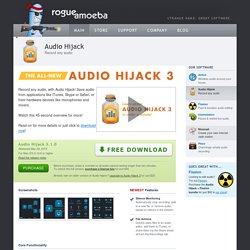 Save audio from applications like iTunes, Skype or Safari, or from hardware devices like microphones and mixers. Watch this 45-second overview for more! Read on for more details or just click to download now! Audio Hijack 3's improved interface makes capturing audio a breeze. Rogue Amoeba’s Audio Hijack Pro has been a longtime favorite of many who wish to capture sound routed through their Mac—whether from apps or audio input devices. 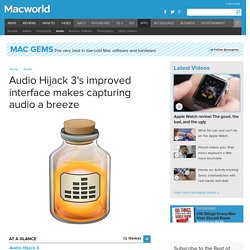 Inventive and powerful though the app was, however, its interface could be challenging to the uninitiated. With the release of Audio Hijack 3, the company has taken a large stride forward in making the app both capable and easy to use. Jumping in. Sound Studio for Mac. WireTap Studio for Mac. WireTap Studio is a professional audio recording, editing, and management solution, allowing you to manage and manipulate your audio with ease. 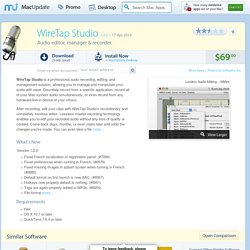 Discretely record from a specific application, record all of your Mac system audio simultaneously, or even record from any hardware/line-in device of your choice. After recording, edit your clips with WireTap Studio's revolutionary and completely lossless editor. Lossless master recording technology enables you to edit your recorded audio without any loss of quality or content. Come back days, months, or even years later and undo the changes you've made. You can even take a file you mistakenly recorded at a lower quality and increase the quality at any time, without the need to re-record! Even better, patent-pending LivePreviewâ„¢ technology enables you to preview your audio before you capture it, saving you lots of time and stress. Best just to avoid this company's products wholesale until evidence appears that they're making an effort again. JackOSX for Mac. JackOSX (the Jack Audio Connection Kit for OS X) is a low-latency audio server, written originally for the GNU/Linux operating system, and now with OS X support. 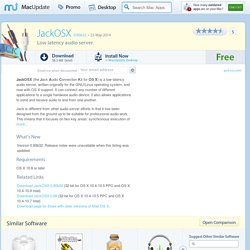 It can connect any number of different applications to a single hardware audio device; it also allows applications to send and receive audio to and from one another. Jack is different from other audio server efforts in that it has been designed from the ground up to be suitable for professional audio work. This means that it focuses on two key areas: synchronous execution of all clients, and low-latency operation. Jack OS X includes: Fission 2: A Powerful Little Audio Editor. As a podcaster, having an audio editing tool that is simple, quick, and easy to use is priceless. 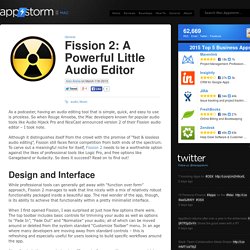 So when Rouge Amoeba, the Mac developers known for popular audio tools like Audio Hijack Pro and NiceCast announced version 2 of their Fission audio editor – I took note. Although it distinguishes itself from the crowd with the promise of “fast & lossless audio editing”, Fission still faces fierce competition from both ends of the spectrum. To carve out a meaningful niche for itself, Fission 2 needs to be a worthwhile option against the likes of professional tools like Logic Pro, and free options like Garageband or Audacity. So does it succeed? Read on to find out! Design and Interface While professional tools can generally get away with “function over form” approach, Fission 2 manages to walk that line nicely with a mix of relatively robust functionality packaged inside a beautiful app. When I first opened Fission, I was surprised at just how few options there were.

Functionality Wrap-Up. Fission Review. Posted 10/17/2012 at 12:13pm | by Steve Paris Whether you’re making a movie, building a podcast, or just pasting two MP3s together, at some point you'll want to edit an audio file on your Mac. 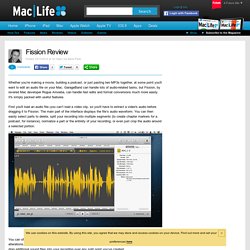 GarageBand can handle lots of audio-related tasks, but Fission, by revered Mac developer Rogue Amoeba, can handle fast edits and format conversions much more easily. It's simply packed with useful features. First you'll load an audio file--you can’t load a video clip, so you'll have to extract a video's audio before dragging it to Fission. The main part of the interface displays the file’s audio waveform.

The audio waveform takes center stage to facilitate editing decisions. You can of course zoom into your waveform using a slider or a keyboard shortcut to make precise alterations. Audacity vs Rogue Amoeba Fission - Audio Editing Comparison. See all Audio Editing › Add to Your Comparison Avid Pro Tools Wavosaur WavePad Sound Editor Master's Edition Advertisement FindTheBest is a company of 150 people dedicated to providing our customers with the ultimate research experience. 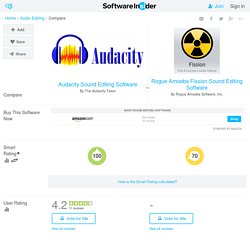 How is the Smart Rating calculated? Overview Audacity. Mac Gems: Fission 2 is a powerful but easy-to-use audio editor. For years, Rogue Amoeba’s Fission has been my go-to tool for manipulating audio files. 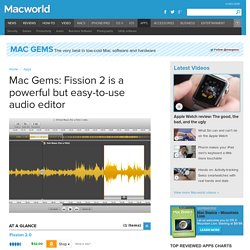 Whenever I need to trim songs, splice tracks, edit voice recordings, fade tracks in or out, or create ringtones, Fission has been simple and efficient—once you’ve mastered the basics, you can do any of these tasks and more. A big update, Fission 2, has been a long time coming, but it was worth the wait. In addition to an attractive new interface—with two themes, one dark and one light—it now supports FLAC files, and can convert files, alone or in batches, to and from any of the formats it supports: AAC, MP3, AIFF, WAV, FLAC, and Apple Lossless. Though it’s still not as versatile as the free XLD—which can convert multiple files at the same time, taking advantage of all available CPU capacity of your Mac—Fission’s file-conversion features will be sufficient for most users.

Not all of Fission’s features are entirely intuitive. Audacity for Mac.