Carbon-14 Dating. Key Concepts Carbon has 3 isotopes, 2 of which are stable (carbon-12 and carbon-13) and one which is radioactive (carbon-14). 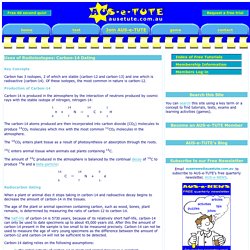 Of these isotopes, the most common in nature is carbon-12. Production of Carbon-14 Carbon-14 is produced in the atmosphere by the interaction of neutrons produced by cosmic rays with the stable isotope of nitrogen, nitrogen-14: The carbon-14 atoms produced are then incorporated into carbon dioxide (CO2) molecules to produce 14CO2 molecules which mix with the most common 12CO2 molecules in the atmosphere. The 14CO2 enters plant tissue as a result of photosynthesis or absorption through the roots. 14C enters animal tissue when animals eat plants containing 14C. BioMath: Carbon Dating. In this section we will explore the use of carbon dating to determine the age of fossil remains. 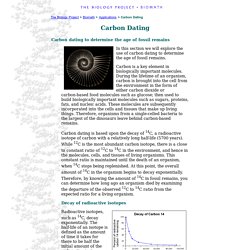 Carbon is a key element in biologically important molecules. During the lifetime of an organism, carbon is brought into the cell from the environment in the form of either carbon dioxide or carbon-based food molecules such as glucose; then used to build biologically important molecules such as sugars, proteins, fats, and nucleic acids. These molecules are subsequently incorporated into the cells and tissues that make up living things. K-12. Welcome to the K12 section of the Radiocarbon WEBinfo site. 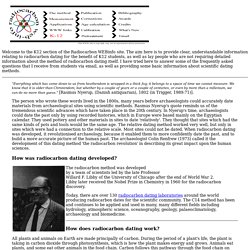 The aim here is to provide clear, understandable information relating to radiocarbon dating for the benefit of K12 students, as well as lay people who are not requiring detailed information about the method of radiocarbon dating itself. I have tried here to answer some of the frequently asked questions that I receive from students via email, as well as providing some basic information about scientific dating methods. "Everything which has come down to us from heathendom is wrapped in a thick fog; it belongs to a space of time we cannot measure. We know that it is older than Christendom, but whether by a couple of years or a couple of centuries, or even by more than a millenium, we can do no more than guess. " [Rasmus Nyerup, (Danish antiquarian), 1802 (in Trigger, 1989:71)]. 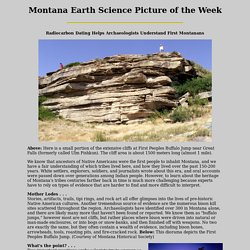 The cliff area is about 1500 meters long (almost 1 mile). We know that ancestors of Native Americans were the first people to inhabit Montana, and we have a fair understanding of which tribes lived here, and how they lived over the past 150-200 years. White settlers, explorers, soldiers, and journalists wrote about this era, and oral accounts were passed down over generations among Indian people. However, to learn about the heritage of Montana's tribes centuries farther back in time is much more challenging because experts have to rely on types of evidence that are harder to find and more difficult to interpret. Mother Lodes . . . How Carbon-14 Dating Works" Radiocarbon Dating Key Concepts - Beta Analytic. 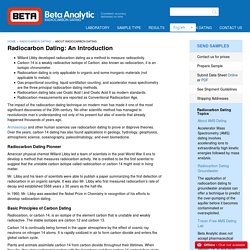 The impact of the radiocarbon dating technique on modern man has made it one of the most significant discoveries of the 20th century. No other scientific method has managed to revolutionize man’s understanding not only of his present but also of events that already happened thousands of years ago. Archaeology and other human sciences use radiocarbon dating to prove or disprove theories. Mr. In 1960, Mr. Radioactive Dating Game - Carbon Dating, Radiometric Dating, Half Life. Topics Radiometric Dating Carbon Dating Half Life Radioactivity Description Learn about different types of radiometric dating, such as carbon dating. 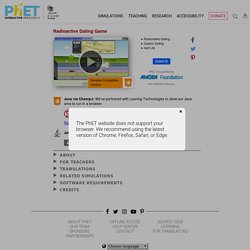 Understand how decay and half life work to enable radiometric dating. Play a game that tests your ability to match the percentage of the dating element that remains to the age of the object. Sample Learning Goals Explain the concept of half-life, including the random nature of it, in terms of single particles and larger samples.Describe the processes of decay, including how elements change and emit energy and/or particlesExplain how radiometric dating works and why different elements are used for dating different objects.Identify that 1/2-life is the time for 1/2 of a radioactive substance to decay. 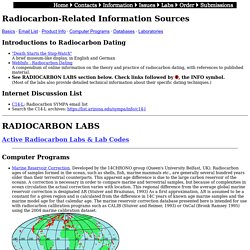