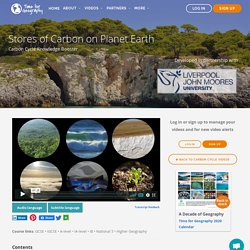 Carbon-neutral in 15 years? RGS-IBG Schools sur Twitter : "Excellent carbon read for A level on 'acidic discharge', peat burning (great peatland map at the bottom), moose flies and a €1 million prize for a green alternative #Finland #geographyteacher. *****Animated diagram of the Earth's Carbon Cycle and how it has changed over time. Carbon, in various forms including CO2 and organic materials, is continually exchanged between the atmosphere, oceans, and biosphere. However, human. 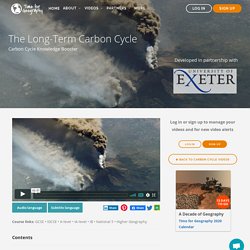 Scientists estimate Earth's total carbon store. Image copyright Getty Images There are 1.85 billion, billion tonnes of carbon on Earth, with more than 99% of it resident beneath our feet. 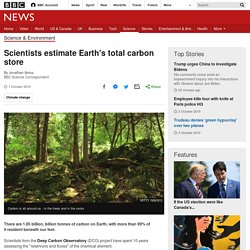 #climatechange : OK, so what's a cold Arctic ever done for us? Albedo - sent a lot of Solar Radiation directly back out to space, keeping the globe that little bit cooler. 1/6…

Robert Rohde sur Twitter : "Because I was staring at it today, I want to share the IPCC AR5 Carbon Cycle diagram showing the stocks and fluxes of carbon in the atmosphere, biosphere, and oceans. Numbers in red indicate the difference from preindustrial.… Zack Labe sur Twitter : "Our oceans are full of life. Here is a model animation of different phytoplankton types in multiple years. They have important roles in better understanding our climate system, especially the carbon cycle (e.g., biological pump) G. Climate change being fuelled by soil damage - report. Media playback is unsupported on your device Climate change can't be halted if we carry on degrading the soil, a report will say. 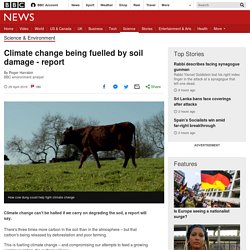 There's three times more carbon in the soil than in the atmosphere – but that carbon's being released by deforestation and poor farming. This is fuelling climate change – and compromising our attempts to feed a growing world population, the authors will say. Problems include soils being eroded, compacted by machinery, built over, or harmed by over-watering. Caiti Walter □ sur Twitter : "How will increasing temperatures affect the cryosphere and thus river discharge in drainage basins around the Himalayas? If you've explored the Indus Waters Treaty with y13, this article is super for synoptic links between ca.

*****Kuznet's Curve: What we can learn from China’s fight against environmental ruin. A good news story about China’s environment is something you don’t hear every day. 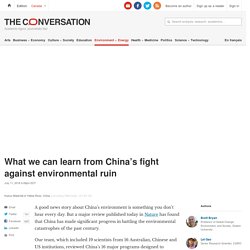 But a major review published today in Nature has found that China has made significant progress in battling the environmental catastrophes of the past century. Our team, which included 19 scientists from 16 Australian, Chinese and US institutions, reviewed China’s 16 major programs designed to improve the sustainability of its rural environment and people. Read more: China's green planning for the world starts with infrastructure We wanted to tell the story of China’s progress, so that other nations may learn from its experience as they strive towards the United Nations’ Sustainable Development Goals.

A monumental effort From 1998, China dramatically escalated its investment in rural sustainability. *****In the Northern Hemisphere, carbon sinks have increased since the late 1980s, drawing down more and more carbon. What caused this increase? Probably a couple of factors ⬇️ Mike Hudema sur Twitter : "Climate change is starting to dissolve the sea floor and the process is speeding up. That's not good. We must raise our ambition and #ActOnClimate. Time for a #GreenNewDeal. #Climate #energy #cdnpoli #climatestrike #PanelsNotPip. Greenhouse gas emissions are distributed across many different sectors of human activity, including power, industry, transportation, and agriculture. Reducing emissions to near zero will require a variety of solutions to address the many different challen. 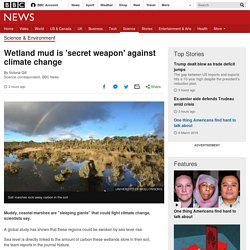 A global study has shown that these regions could be awoken by sea level rise. Using CORINE Landuse data available from the EPA Geoportal, we can see that vast amounts of Irish land are used solely for the purpose of animal grazing. So, where are our natural spaces? #Carbonsequestration #ExtinctionRebellion @Irishwildlife @IrishEnvN.

Carbon cycle: the global methane budget.… Map shows the heartbeat of Mother Nature's productivity throughout the year. The measurement is called gross primary productivity. Source. How Britain in the 18th century became a carbon based society. Wrigley, E. A. (2013). Energy and the English industrial revolution. Phil. Trans. R. Soc. A, 371(1986) This is clear as a bell & v interesting. Strong reminder that we’re already quite a few steps down the decarbonisation road. Helps energize us for the rest of the journey.… Excellent article for A level Carbon cycles - the beauty and necessity of peat in storing CO2…

When bogs burn, the environment takes a hit. In 2015, massive wildfires burned through Indonesia, sending thick smoke and haze as far as Thailand. 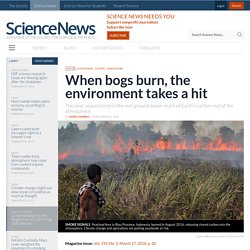 These fires were “the worst environmental disaster in modern history,” says Thomas Smith, a wildfire expert at King’s College London. Smith estimates that the fires and smoke killed 100,000 people in Indonesia and neighboring countries and caused billions of dollars in damage. The fires were costly for the rest of the planet, too: At their peak, the blazes belched more climate-warming carbon dioxide into the atmosphere each day than did all U.S. economic activity. Two years later and 13,000 kilometers away, a fire smoldered on the fringes of a barren, northern landscape. Have you heard of the 'Little Ice Age'? Read more #climatechange #europe… Ponds can absorb more carbon than woodland – here's how they can fight climate change in your garden.

Ponds are taken for granted. 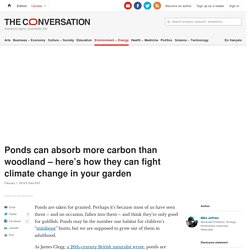 Perhaps it’s because most of us have seen them – and on occasion, fallen into them – and think they’re only good for goldfish. Ponds may be the number one habitat for children’s “minibeast” hunts, but we are supposed to grow out of them in adulthood. As James Clegg, a 20th-century British naturalist wrote, ponds are a field particularly suited to the activities of the amateur, whose humble pond-hunting, if carried out systematically and carefully, may well result in valuable contributions to science. #LifeOnEarth is dominate by plants making up 82% by weight. The total weight of mammals is made of of 30% humans, 66% our livestock, while wild animals make up just 4%! Welcome to the #Anthropocene… Forest soil time lapse Bioturbation is the technical term for mixing the leaf litter with the soil, which was new to me, which helps the detritivors (or 'decomposers' in the CCEA A Level Specification) do their thing.

European colonisation of the Americas killed 10% of world population and caused global cooling. While Europe was in the early days of the Renaissance, there were empires in the Americas sustaining more than 60m people. 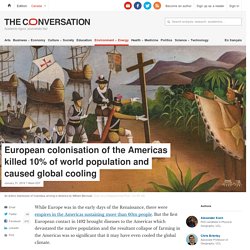 But the first European contact in 1492 brought diseases to the Americas which devastated the native population and the resultant collapse of farming in the Americas was so significant that it may have even cooled the global climate. The number of people living in North, Central and South America when Columbus arrived is a question that researchers have been trying to answer for decades. Unlike in Europe and China, no records on the size of indigenous societies in the Americas before 1492 are preserved.

To reconstruct population numbers, researchers rely on the first accounts from European eyewitnesses and, in records from after colonial rule was established, tribute payments known as “encomiendas”. UCL geographers @UCLgeography in @ConversationUK on colonization in the Americas and historic climate change. *****How Many Gigatons of CO2? Glen Peters sur Twitter : "THREAD (Global Fossil CO₂ Emissions) Global fossil CO₂ emissions are on track to rise more than 2% in 2018 (2.7%, range 1.8% to 3.7%). Emissions rose 1.6% in 2017 (leap-year adjusted) after a temporary slowdown from 2014 to 2016.

Fernanda Adame sur Twitter : "How much carbon is lost after mangrove clearing? How long does it take to recover? Read in our new publication how to reduce emissions from Malaysian #mangroves #deforestation @bluecology AddThis. Scottish lochs 'important stores' of carbon. Image copyright Tern TV/BBC Scotland Scotland's sea lochs play an important role in storing carbon which would otherwise contribute to climate change, scientists have suggested. 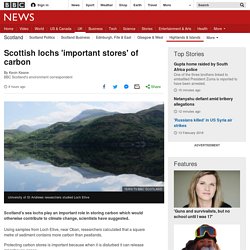 Using samples from Loch Etive, near Oban, researchers calculated that a square metre of sediment contains more carbon than peatlands. Protecting carbon stores is important because when it is disturbed it can release greenhouse gases. The study was carried out by researchers at St Andrews University. While millions is spent on enhancing and restoring carbon-stores in peat moors, sea lochs are afforded relatively little protection from activities like dredging and the researchers said that needed to change. Research fellow Craig Smeaton said: "Scottish sea lochs contain a large amount of carbon. Enquiry Qs broken down into Spec requirements and then a possible exam Q to assess students on their k&u. Revision in the making. *****WMO releases Greenhouse Gas report at 1000 GMT on concentrations of CO2 and other heat-trapping gases in atmosphere in 2016 #COP23.

Satellites are giving us a commanding view of Earth's carbon cycle. The job of monitoring Earth’s carbon cycle and humanity’s carbon dioxide emissions is increasingly supported from above, thanks to the terabytes of data pouring down to Earth from satellites. Five papers published in Science today provide data from NASA’s Orbiting Carbon Observatory-2 (OCO-2) mission. *****Water cycle / Carbon cycle: Resource WJEC Educational Resources Website. Linking water and carbon cycles - the role of small streams #geographyteacher. *****Ultimate bogs: how saving peatlands could help save the planet. Randy Kolka hands me a fist-sized clump of brownish-black material pulled up by an auger from a bog.

It’s the color and texture of moist chocolate cake. When I look closely I can see filaments of plant material. This hunk of peat, pulled from two meters (7ft) below the surface, is about 8,000 years old. I’m holding plants that lived and died before the Egyptians constructed the pyramids and before humans invented the wheel. *****The carbon cycle (explainer video) *****A year in the life of Earth’s CO2, beautiful work by @nasa. *****Photosynthesis in the U.S. Corn Belt. During peak growing season, it produces more oxygen than the Amazon! Why Engineers Can’t Stop Los Angeles' Enormous Methane Leak - Motherboard. One of the biggest environmental disasters in US history is happening right now, and you've probably never heard of it.

An enormous amount of harmful methane gas is currently erupting from an energy facility in Aliso Canyon, California, at a startling rate of 110,000 pounds per hour. The gas, which carries with it the stench of rotting eggs due to the addition of a chemical called mercaptan, has led to the evacuation 1,700 homes so far. Many residents have already filed lawsuits against the company that owns the facility, the Southern California Gas Company.

*****Permafrost degradation: In Siberia there is a huge crater and it is getting bigger. Near the Yana river basin, in a vast area of permafrost, there is a dramatic tadpole-shaped hole in the ground: the Batagaika crater. The crater is also known as a "megaslump" and it is the largest of its kind: almost 0.6 miles (1km) long and 282ft (86m) deep. But these figures will soon change, because it is growing quickly. Mapping the world’s largest tropical peatland. When permafrost melts, what happens to all that stored carbon? Living Planet: Saving Scotland′s peat bogs. Share. New paper by @duarteoceans: Export from #Seagrass Meadows Contributes to Marine Carbon Sequestration #Bluecarbon.

New research says it just might be possible:'Greater soil carbon stocks and faster turnover rates with increasing agricultural productivity' World's largest peatland with vast carbon-storage capacity found in Congo. ***Space Laser Reveals Boom-and-Bust Cycle of Polar Ocean Plants. NASA recently kicked off NAAMES, a five-year study of what's happening at the bottom of the ocean food chain and how that will evolve as climate changes. NAAMES includes ocean, airborne and satellite components. ***Carbon measured with Lidar UCL: A walk through a laser-scanned forest. Water and Carbon in the Amazon Rainforest. Scientists have long feared this ‘feedback’ to the climate system. Now they say it’s happening.