'Widespread methane leakage' from ocean floor off US coast. Peak Oil: The End of the Oil Age. It has taken between 50-300 million years to form, and yet we have managed to burn roughly half of all global oil reserves in merely 125 years or so. 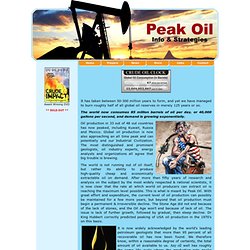 The world now consumes 85 million barrels of oil per day, or 40,000 gallons per second, and demand is growing exponentially. Oil production in 33 out of 48 out countries has now peaked, including Kuwait, Russia and Mexico. Global oil production is now also approaching an all time peak and can potentially end our Industrial Civilization. The most distinguished and prominent geologists, oil industry experts, energy analysts and organizations all agree that big trouble is brewing. The world is not running out of oil itself, but rather its ability to produce high-quality cheap and economically extractable oil on demand. It is now widely acknowledged by the world's leading petroleum geologists that more than 95 percent of all recoverable oil has now been found.

Worldwide discovery of oil peaked in 1964 and has followed a steady decline since. Analysis. Earlier this year, the UN's World Health Organisation released a report suggesting climate change could cause an extra 250,000 deaths annually between 2030 and 2050. 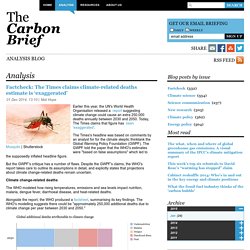 CECHR sur Twitter : "Fracking: Gas leaks from faulty wells linked to contamination in some groundwater. Computer Model Provides a New Portrait of Carbon Dioxide. An ultra-high-resolution NASA computer model has given scientists a stunning new look at how carbon dioxide in the atmosphere travels around the globe. 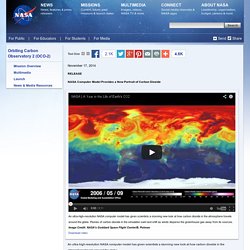 Plumes of carbon dioxide in the simulation swirl and shift as winds disperse the greenhouse gas away from its sources. Image Credit: NASA's Goddard Space Flight Center/B. Putman. Eric Holthaus sur Twitter : "Pretty much every possible mode of transit, compared for climate impact: via @evanjmwaters. Gonzalo Stirs Up Sediment and the Carbon Cycle. On October 17, 2014, the eye of category 3 Hurricane Gonzalo passed right over Bermuda. 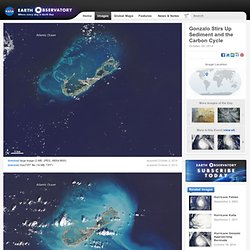 The storm knocked out power to most of the island and caused between $200–$400 million in property damage, though it did not cause any deaths. The potent storm also stirred up the sediments in the shallow bays and lagoons around Bermuda, spreading a huge mass of sediment across the North Atlantic Ocean. The Operational Land Imager on the Landsat 8 satellite acquired these two natural-color views of Bermuda. The top image was acquired on October 2, 2014, and the second was acquired on October 18, a day after Gonzalo passed through. Greenland’s dark snow may start global warming ‘feedback loop’ - Environment - The Independent. The world’s leading expert on the ice that covers the huge expanse of Greenland has told The Independent that he was “stunned” to see how much darker it has become in the past year – warning it could start a hugely damaging “cascading feedback loop” of the area becoming blacker as less and less light is reflected. 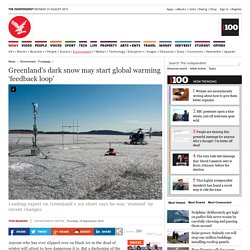 Dr Jason Box, a glaciology professor, has just finished his 23rd expedition to the Danish-owned island since 1994, a series of trips that included spending a year camped on the country’s inland ice. And this time, said Dr Box, he had never seen anything like it. “Where I took the photos I was stunned by how large an area had such a dark appearance,” said Dr Box, who works for the Geological Survey of Greenland.

“This rocket ride has just gotten off the launchpad. I expect the snow and ice to continue darkening – every indication is that the Arctic climate will continue warming and the number of wildfires will keep increasing.” Loading gallery. NASA : #OCO2 will study the carbon ... NASA : How well do you know your Earth? ... TIERRA SANA sur Twitter : "La paradoja humana... Wellington Geography sur Twitter : "Carbon emissions around the world - notice any patterns? #geographyteacher #energy... 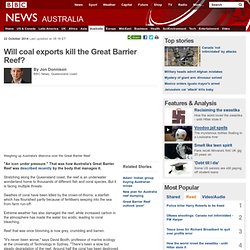 " That was how Australia's Great Barrier Reef was described recently by the body that manages it. Stretching along the Queensland coast, the reef is an underwater wonderland home to thousands of different fish and coral species. Swathes of coral have been killed by the crown-of-thorns, a starfish which has flourished partly because of fertilisers seeping into the sea from farm run-off.

Extreme weather has also damaged the reef, while increased carbon in the atmosphere has made the water too acidic, leading to coral bleaching. Reef that was once blooming is now grey, crumbling and barren. "It's never been worse," says David Booth, professor of marine ecology at the University of Technology in Sydney. But environmentalists say there's another major threat: coal. 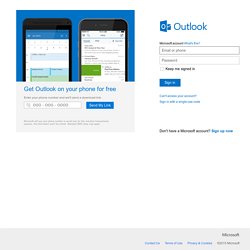