A nonprofit organization to develop and teach sustainable ways to grow food. 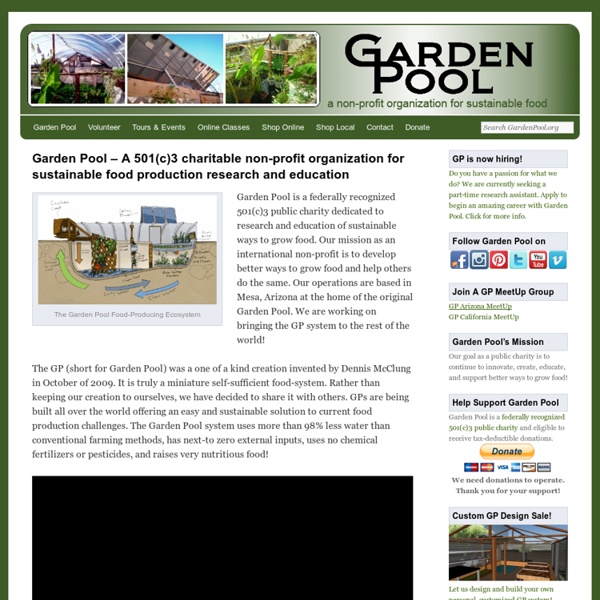 Garden Pool A view of the tilapia pond, grapes, and chicken coop inside our old swimming pool. Garden Pool started as one family’s blog to document converting an old backyard swimming pool in to a closed-loop food-producing urban greenhouse and has evolved in to a non-profit organization. The GP (short for Garden Pool) was a one of a kind creation invented by Dennis McClung in October of 2009. It is truly a miniature self-sufficient ecosystem. Rather than keeping our creation to ourselves, we have decided to share it with others.

Solar Sunspaces and Greenhouses Dozens of free design guides and plans for dozens of sunspaces and greenhouses you can build. Attached sunspaces can be a good way to solar heat your house, provide some additional living space, plant growing space, a place to read the newspaper and look at the views, and a place to hang the laundry for solar drying. Very versatile and they look nice to boot. Kunyit Turmeric or Kunyit in Malay is a rhizomatous herbaceous perennial plant of the ginger family. This plant is use as herb in Malay medicine and cooking, leaves and rhizome are use to add flavour to dishes and cure sickness. I am trying out this plants, normally it doesn't grow in water logged soil.

Breeding the Nutrition Out of Our Food This health directive needs to be revised. If we want to get maximum health benefits from fruits and vegetables, we must choose the right varieties. Studies published within the past 15 years show that much of our produce is relatively low in phytonutrients, which are the compounds with the potential to reduce the risk of four of our modern scourges: , cardiovascular disease, and . The loss of these beneficial nutrients did not begin 50 or 100 years ago, as many assume.

Development in the Ecological Age Do you live in a developed nation or a developing nation? If your nation has an extensive system of roads, rail and airports, if it is fully electrified, if it is mostly urban and suburban, if modern medicine is widespread, if literacy and education are near-universal, if most people are connected to the Internet, and if, most crucially, per capita GDP is high, then most people would say you live in a developed nation. Otherwise, it will be classified as developing—still on the way to acquiring these things. Implicit in the developed/developing distinction is the assumption that the course of social and economic evolution exemplified by the developed countries is normal, inevitable and generally desirable. If I am developed and you are developing, that means that your destiny is to be like me. Today, some key flaws in the narrative of development are become obvious.

Turn Your Foreclosed Swimming Pool into a Permaculture Fish Farm Like many foreclosed properties in the state, this one in Mesa, Arizona, had an abandoned swimming pool. The enormous expense of keeping a swimming pool running was just no longer sustainable for the sellers. But rather than spend thousands to fix the pool, the two young homeowners who bought the home decided to transform the abandoned pool into something useful. A Garden Pool. Lemnoideae Duckweeds, or water lens, are flowering aquatic plants which float on or just beneath the surface of still or slow-moving bodies of fresh water and wetlands. Also known as "bayroot", they arose from within the arum or aroid family (Araceae),[1] and therefore, often are classified as the subfamily Lemnoideae within the Araceae. Classifications created prior to the end of the twentieth century classify them as a separate family, Lemnaceae.

World Renown Heart Surgeon Speaks Out On What Really Causes Heart Disease By Dr. Dwight Lundell, M.D. We physicians with all our training, knowledge and authority often acquire a rather large ego that tends to make it difficult to admit we are wrong. Medieval peasants got more vacation time than you Life for the medieval peasant was certainly no picnic. His life was shadowed by fear of famine, disease and bursts of warfare. His diet and personal hygiene left much to be desired. But despite his reputation as a miserable wretch, you might envy him one thing: his vacations. Plowing and harvesting were backbreaking toil, but the peasant enjoyed anywhere from eight weeks to half the year off. The Church, mindful of how to keep a population from rebelling, enforced frequent mandatory holidays.

Urban Agriculture Today the average food item travels 1300 to 1500 miles from farm to plate. For Vertical Farming see - www.inspirationgreen.com/vertical-farms Source Frank Lloyd Wright's Broadacre City - Plan for The Living City. How We Designed Our Solar Greenhouse We live and garden on an urban lot in Calgary, Canada, located on the 51st parallel north and approximately 80 km east of the front ranges of the Canadian Rockies. This northern climate presents many design challenges, including less than one hundred frost-free days, an annual mean temperature of 4.1 degrees Celcius and summer cyclonic weather patterns (i.e. high risk of hail). We are also considered to be a moderate temperate desert as our precipitation is around 500 mm including snow.

Facts About Abalone Facts About Abalone Classification In the animal kingdom, abalone belong to the phylum Mollusca, a group which includes clams, scallops, sea slugs, octopuses and squid. Mollusks are world wide and predominantly marine. 45 Uses For Lemons That Will Blow Your Socks Off Most people are familiar with the traditional uses for lemons to soothe sore throats and add some citrus flavor to our foods. However the diversity of applications for lemons far exceeds general knowledge and once you read the following list, you’ll likely want to stock at least a few lemons in your kitchen 24-7. 1. Freshen the Fridge Remove refrigerator odors with ease. Dab lemon juice on a cotton ball or sponge and leave it in the fridge for several hours. Make sure to toss out any malodorous items that might be causing the bad smell.

21 hours 21 hours A ‘normal’ working week of 21 hours could help to address a range of urgent, interlinked problems: overwork, unemployment, over-consumption, high carbon emissions, low well-being, entrenched inequalities, and the lack of time to live sustainably, to care for each other, and simply to enjoy life. February 13, 2010 // Written by: Anna Coote, Head of Social PolicyJane Franklin, Project Co-ordinator and Researcher, Social Policy This report sets out arguments for a much shorter working week. It proposes a radical change in what is considered ‘normal’ – down from 40 hours or more, to 21 hours.