Chris Drury - microcosm and macrocosm. Emails: University of Wyoming officials sped up, touted removal of anti-coal sculpture. University of Wyoming officials sped up the removal of a controversial anti-coal sculpture because of the furor it caused, but chose to tell the public the removal was as scheduled and because of water damage, emails show. 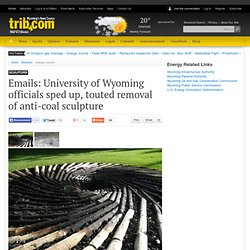 Emails first requested by Wyoming Public Radio and later obtained by the Star-Tribune show that the decision to remove “Carbon Sink: What Goes Around, Comes Around” from the campus was made by UW President Tom Buchanan before the piece was damaged and a full year before the piece’s dismantling was due. The decision to remove the flat whirlpool of coal and charred Wyoming wood sinking into the earth was the last in a number of steps top university officials took to calm angry state legislators, energy industry donors and trade group representatives. “It’ll be a slog for all of us,” one university official wrote in an email after the news of the sculpture broke. Carbon Sink sculpture at University of Wyoming: Mining and energy donors have artwork destroyed.

We’ve got a lot of dead trees in the Rockies. 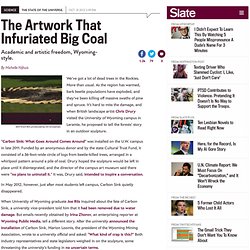 More than usual. As the region has warmed, bark beetle populations have exploded, and they’ve been killing off massive swaths of pine and spruce. It’s hard to miss the damage, and when British landscape artist Chris Drury visited the University of Wyoming campus in Laramie, he proposed to tell the forests’ story in an outdoor sculpture. “Carbon Sink: What Goes Around Comes Around” was installed on the U.W. campus in late 2011. Funded by an anonymous donor and by the state Cultural Trust Fund, it consisted of a 36-foot-wide circle of logs from beetle-killed trees, arranged in a whirlpool pattern around a pile of coal. In May 2012, however, just after most students left campus, Carbon Sink quietly disappeared. When University of Wyoming graduate Joe Riis inquired about the fate of Carbon Sink, a university vice-president told him that it had been removed due to water damage. 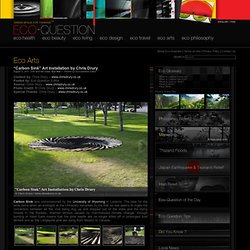 The idea for the work came when an ecologist at the University remarked to me that no one seems to make the connection between all the coal being dug up and shipped out of the state and the dying forests in the Rockies. Warmer winters caused by man-induced climate change, through burning of fossil fuels means that the pine beetle are no longer killed off in prolonged cold winters and so the Lodgepole pine are dying from Mexico to Canada. Back to top As the University of Wyoming is financed almost entirely from energy taxes, this caused a huge row and the legislators threatened to withdraw funding. 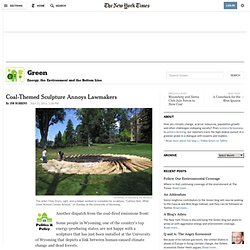 Another dispatch from the coal-fired emissions front: Some people in Wyoming, one of the country’s top energy-producing states, are not happy with a sculpture that has just been installed at the University of Wyoming that depicts a link between human-caused climate change and dead forests. The installation, by the British artist Chris Drury, is called “Carbon Sink: What Goes Around Comes Around.” It is 36 feet in diameter, and at its center, it features logs from trees killed by beetles, surrounded by lumps of coal. Forests have been dying in large numbers across the West, and scientists say it is because the climate has warmed, reducing the frequency of the well-below-zero temperatures that kill insects that attack pine trees.

Mr. “I’m sympathetic that we all use fossil fuels,” he said. Artist Interview with Chris Drury Coming Soon. Artist Chris Drury is interviewed by Ali Grossman of UWTV with his sculpture behind him.Courtesy of the Art Museum. 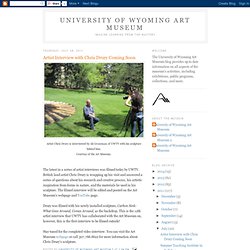 The latest in a series of artist interviews was filmed today by UWTV. British land artist Chris Drury is wrapping up his visit and answered a series of questions about his research and creative process, his artistic inspiration from forms in nature, and the materials he used in his sculpture. The filmed interview will be edited and posted on the Art Museum's webpage and YouTube page. Drury was filmed with his newly installed sculpture, Carbon Sink: What Goes Around, Comes Around, as the backdrop. This is the 12th artist interview that UWTV has collaborated with the Art Museum on, however, this is the first interview to be filmed outside! Drury.