Indoor Carbon Monoxide A Case Study in England for Detection and Interventions to Reduce Population Exposure.

Savannah: This article is an example of a major indoor air issue- carbon monoxide! – hsh112indoorairpollution 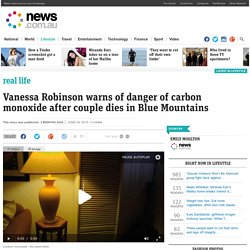 Chase and Tyler Robinson, who died from carbon monoxide poisoning in the family’s rented home in Victoria in 2010. Source: News Limited IT HAS no modus operandi. Carbon monoxide is a silent, odourless and toxic gas that once unleashed can render a person unconscious in an instant, and take their life within minutes. It is believed this invisible killer claimed the lives of a young Sydney couple as they holidayed in the Blue Mountains at the weekend. The pair had been staying in a makeshift cabin overlooking Days Gulley and had used a wood chip heater to keep warm as temperatures dropped overnight. The tragedy has been a painful reminder for Vanessa Robinson, who lost her two sons to the silent killer just over five years ago. Gas heating - health and safety issues. Gas heating - health and safety issues Summary Gas heaters need to be looked after. 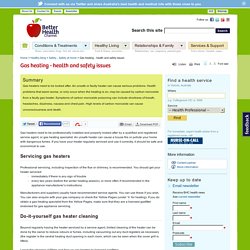 An unsafe or faulty heater can cause serious problems. Health problems that seem worse, or only occur when the heating is on, may be caused by carbon monoxide from a faulty gas heater. Symptoms of carbon monoxide poisoning can include shortness of breath, headaches, dizziness, nausea and chest pain. Gas heaters need to be professionally installed and properly looked after by a qualified and registered service agent, or gas heating specialist. Servicing gas heaters Professional servicing, including inspection of the flue or chimney, is recommended. Do-it-yourself gas heater cleaning Beyond regularly having the heater serviced by a service agent, limited cleaning of the heater can be done by the owner to reduce odours or fumes, including vacuuming out any duct registers as necessary (the register is the central heating duct opening in each room, which can be seen when the cover grill is lifted). 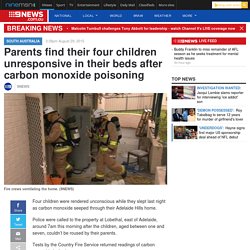 Police were called to the property at Lobethal, east of Adelaide, around 7am this morning after the children, aged between one and seven, couldn’t be roused by their parents. Tests by the Country Fire Service returned readings of carbon monoxide in the home. It is believed a combustion fire in the lounge room was the cause, with police speculating a blocked chimney could have prevented adequate ventilation. “What we believe at this stage is that gas built up, the heat transfer may have transferred the gas to the other rooms and unfortunately the children being so young are more susceptible and have succumbed to the carbon monoxide,” a police spokesman said at the scene. 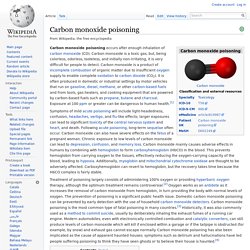 Carbon monoxide is a toxic gas, but, being colorless, odorless, tasteless, and initially non-irritating, it is very difficult for people to detect. Carbon monoxide is a product of incomplete combustion of organic matter due to insufficient oxygen supply to enable complete oxidation to carbon dioxide (CO2). It is often produced in domestic or industrial settings by motor vehicles that run on gasoline, diesel, methane, or other carbon-based fuels and from tools, gas heaters, and cooking equipment that are powered by carbon-based fuels such as propane, butane and charcoal.

Exposure at 100 ppm or greater can be dangerous to human health.[1] Signs and symptoms[edit] The acute effects produced by carbon monoxide in relation to ambient concentration in parts per million are listed below:[15][16] Acute poisoning[edit] Chronic poisoning[edit] Causes[edit] Pathophysiology[edit] Hemoglobin[edit] Myoglobin[edit] 1. 2. 3.