In the future, we may really grow vegetables using our own equipment at home, especially salads, herbs, and tomatoes. 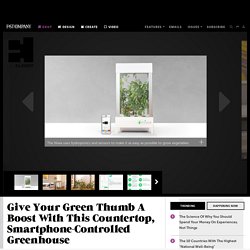 Like other interactive home growing systems we've covered recently (see here and here), the Niwa uses hydroponics and sensors to make it as easy as possible to grow vegetables right in your kitchen. If you happen to live in an apartment with no access to a yard or even a balcony, growing your own food can be a challenge: Even indoor gardening kits like Windowfarms (a clever design that builds a full garden in a sunny window) take some skill and maintenance to get right. 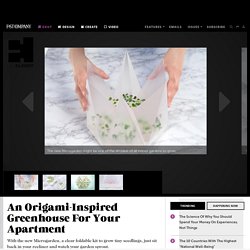 But things keep getting easier. The new Microgarden, a tiny greenhouse now raising funds on Indiegogo, might be one of the simplest of all indoor gardens to grow. "We wanted to make something that is very easy to use," says Anna Glansén, a designer at Tomorrow Machine, the design studio that developed the Microgarden for INFARM, a Berlin-based urban farming company. Portable Greenhouse. Make an Easy, Inexpensive Mini-Greenhouse With Low Tunnels - Organic Garden. During any time of year, a visitor to my Zone 6 garden will find at least a couple of low tunnels at work. 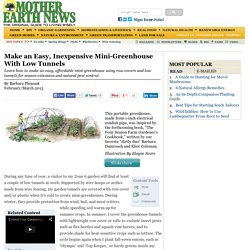 Supported by wire hoops or arches made from wire fencing, my garden tunnels are covered with row cover and/or plastic when it’s cold to create mini-greenhouses. During winter, they provide protection from wind, hail, and most critters while speeding soil warm-up for summer crops. In summer, I cover the greenhouse tunnels with lightweight row cover or tulle to exclude insect pests such as flea beetles and squash vine borers, and to provide shade for heat-sensitive crops such as lettuce. The cycle begins again when I plant fall-sown onions, such as ‘Olympic’ and ‘Top Keeper,’ or hardy greens inside my multipurpose, portable mini-greenhouses. Anatomy of a Low Tunnel Any garden tunnel has three parts — the support hoops or arches, the cover, and the pins, ropes or weights to keep the edges secure. Covers for Low Tunnels Securing the Edges. 7 Market Crops You Can Grow in a Greenhouse - Hobby Farms.

When cold weather sets in, most farmers close up their market booth for the season and pack it in. 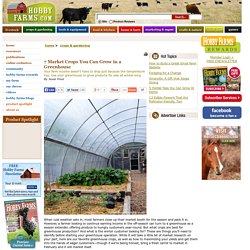 However, a farmer looking to continue earning income in the off-season can turn to a greenhouse as a season extender, offering produce to hungry customers year-round. But what crops are best for greenhouse production? And what is the winter customer looking for? These are things you’ll need to identify before starting your greenhouse operation. While it will take a little bit of market research on your part, here are our favorite greenhouse crops, as well as how to maximizing your yields and get them into the hands of eager customers—though if we're being honest, bring a fresh carrot to market in February and it will market itself. 1. Growing in a Small-Scale Greenhouse. By Kelly Wood Photo courtesy of iStockphoto/Thinkstock A greenhouse can greatly enhance your backyard-gardening experience. 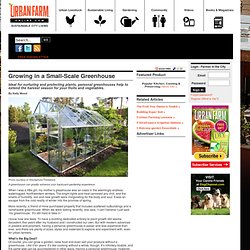 When I was a little girl, my mother’s glasshouse was an oasis in the seemingly endless, waterlogged, Northwestern winters. The bright lights and heat canceled any chill, and the smells of humidity, soil and new growth were invigorating for the body and soul. It was an escape from the cold reality of winter into the promise of spring. More recently, a friend of mine purchased property that includes scattered outbuildings and a ramshackle greenhouse. 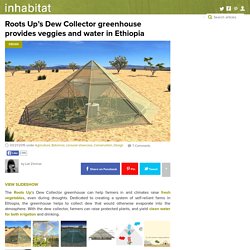 Dedicated to creating a system of self-reliant farms in Ethiopia, the greenhouse helps to collect dew that would otherwise evaporate into the atmosphere. With the dew collector, farmers can raise protected plants, and yield clean water for both irrigation and drinking. The dome-like greenhouse is activated when temperatures increase in the noon sun, causing water to evaporate and rise. With the humidity contained, the top point of the structure catches this evaporation before it’s able to escape into the atmosphere. As night falls, the greenhouse top is then opened by pulling the ropes attached to the latch, exposing the collected droplets to cool air.

Those droplets then cool and condense, falling into a storage cistern. Related: The Globe (Hedron) Is a Geodesic Greenhouse for Urban Farmers + Roots Up + Roots Up on Indiegogo. While living in Tokyo, Philipp Hutfless, an industrial designer from Germany, saw how much food the Japanese import from abroad. 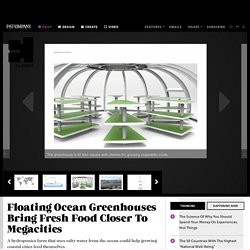 The industrialized nation just doesn't have a lot of room for agriculture, neither in rural areas nor in cities. His response was to develop Vereos, an idea for coastal cities with limited space for growing food. It's a floating greenhouse that recycles freshwater and gets power from built-in solar panels. The greenhouse is 42 feet square with shelves for growing vegetables inside.

It has a reverse-osmosis plant onboard, which pushes saltwater at high pressure through a membrane to produce freshwater. Hutfless works at the University of Applied Sciences in Darmstadt, in the middle of Germany.