Attribution of Warming due to Human Emissions of CO2

Part of the heat is coming from beneath our feet. By Judith Curry A thought-provoking article from my new favorite blog, The Ethical Skeptic. 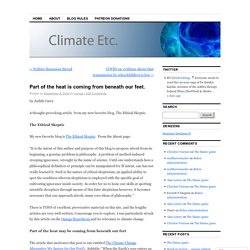 New Study Effectively Eliminates Confidence In Human Attribution For Modern Global Warming. The forcing uncertainties and lack of observational measurements in the top-to-bottom global ocean preclude an assessment that modern warmth is due to anthropogenic activities. 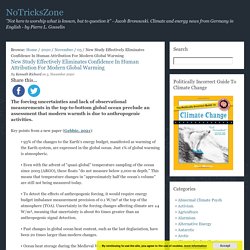 Key points from a new paper (Gebbie, 2021): • 93% of the changes to the Earth’s energy budget, manifested as warming of the Earth system, are expressed in the global ocean. Just 1% of global warming is atmospheric. • Even with the advent of “quasi-global” temperature sampling of the ocean since 2005 (ARGO), these floats “do not measure below 2,000-m depth.” This means that temperature changes in “approximately half the ocean’s volume” are still not being measured today. • To detect the effects of anthropogenic forcing, it would require energy budget imbalance measurement precision of 0.1 W/m² at the top of the atmosphere (TOA)

. • Past changes in global ocean heat content, such as the last deglaciation, have been 20 times larger than modern changes. New Study In Journal Of Earth Sciences: Human Activities “Not Responsible For Observed CO2 Increase” By P Gosselin on 3. 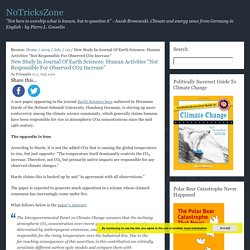 July 2019 A new paper appearing in the journal Earth Sciences here authored by Hermann Harde of the Helmut-Schmidt-University, Hamburg Germany, is stirring up more controversy among the climate science community, which generally claims humans have been responsible for rise in atmospheric CO2 concentrations since the mid 19th century. New Papers: Ex-NOAA Climatologist And Russian Physicists Find Human Contribution To Warming 0.0°C-0.02°C.

By Kenneth Richard on 5. 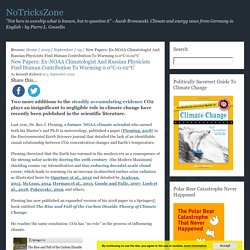 September 2019 Two more additions to the steadily accumulating evidence CO2 plays an insignificant to negligible role in climate change have recently been published in the scientific literature. Last year, Dr. Rex J. Fleming, a former NOAA climate scientist who earned both his Master’s and Ph.D in meteorology, published a paper (Fleming, 2018) in the Environmental Earth Sciences journal that detailed the lack of an identifiable causal relationship between CO2 concentration changes and Earth’s temperature. Fleming has now published an expanded version of his 2018 paper in a Springer© book entitled The Rise and Fall of the Carbon Dioxide Theory of Climate Change. He reaches the same conclusion: CO2 has “no role” in the process of influencing climate. Image Source: Fleming, 2019 Physicists Dr. Image Source: Krainov and Smirnov, 2019. Who to Blame for Rising CO2? Source :NOAA Blaming global warming on humans comes down to two assertions: Rising CO2 in the atmosphere causes earth’s surface temperature to rise.

Humans burning fossil fuels cause rising atmospheric CO2. For this post I will not address the first premise, instead refer the reader to a previous article referencing Fred Singer. He noted that greenhouse gas theory presumes surface warming arises because heat is forced to escape at a higher, colder altitude. The focus in this piece is the claim that fossil fuel emissions drive observed rising CO2 concentrations. Maybe only 15% of CO2 increase since 1750 due to us – an unsettling result for those on board that luxuriously funded liner called the SS Climate Consensus.

The aim of trying to model climate by running simulations squillions of times when we know the system is crazily complex does seem absurd, and indeed liable to produce every possible kind of climate unless carefully tended by high priests who know what to look for to provide illustrations of the man-made CO2-driven climate crisis conjecture. 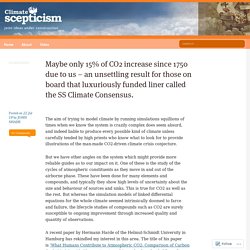 But we have other angles on the system which might provide more reliable guides as to our impact on it. One of these is the study of the cycles of atmospheric constituents as they move in and out of the airborne phase. These have been done for many elements and compounds, and typically they show high levels of uncertainty about the size and behaviour of sources and sinks.

This is true for CO2 as well as the rest. Why human CO2 does not change climate - edberry.com. By Edwin Berry, PhD, CCM October 2, 2017: I posted this preprint to get comments. 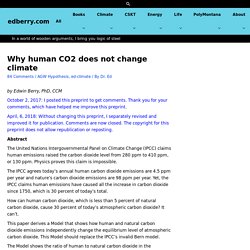 Thank you for your comments, which have helped me improve this preprint. April, 6, 2018: Without changing this preprint, I separately revised and improved it for publication. Comments are now closed. The copyright for this preprint does not allow republication or reposting. Abstract The United Nations Intergovernmental Panel on Climate Change (IPCC) claims human emissions raised the carbon dioxide level from 280 ppm to 410 ppm, or 130 ppm. 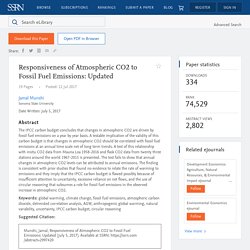 No GHG Warming Fingerprints in the Sky. Detection and Attribution of Man-made Climate Change. Peer-Reviewed Research Suggests Very Little Warming from CO2. A year-old article in Idõjárás: Quarterly Journal of the Hungarian Meteorological Service is suddenly getting attention in the meteorological community. 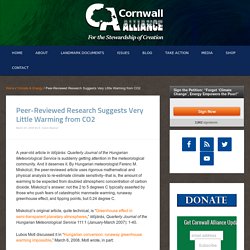 And it deserves it. By Hungarian meteorologist Ferenc M. Miskolczi, the peer-reviewed article uses rigorous mathematical and physical analysis to re-estimate climate sensitivity–that is, the amount of warming to be expected from doubled atmospheric concentration of carbon dioxide. Miskolczi’s answer: not the 2 to 5 degrees C typically asserted by those who push fears of catastrophic manmade warming, runaway greenhouse effect, and tipping points, but 0.24 degree C. Miskolczi’s original article, quite technical, is “Greenhouse effect in semi-transparent planetary atmospheres,” Idõjárás, Quarterly Journal of the Hungarian Meteorological Service 111:1 (January-March 2007): 1-40. Lubos Motl discussed it in “Hungarian conversion: runaway greenhouse warming impossible,” March 6, 2008, Motl wrote, in part: That last paragraph is important. Rate of Increasing Concentrations of Atmospheric Carbon Dioxide Controlled by Natural Temperature Variations.

Study: CO2 NOT causing climate change - Principia Scientific International. Published on Written by PSI Staff New study shows that the trace gas CO2 found in the atmosphere cannot be shown to cause anything other than small changes in Earth’s surface temperature. 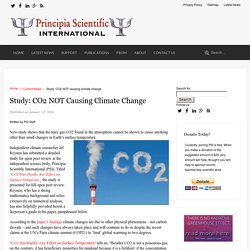 Independent climate researcher Jef Reynen has submitted a detailed study for open peer review at the independent science body, Principia Scientific International (PSI). Titled ‘CO2 Has Hardly Any Effect on Surface Temperate’, the study is presented for full open peer review. Reynen, who has a strong mathematics background and relies extensively on numerical analysis, has also helpfully provided herein a layperson’s guide to his paper, paraphrased below. According to the paper’s findings climate changes are due to other physical phenomena – not carbon dioxide – and such changes have always taken place and will continue to do so despite the recent claims at the UN’s Paris climate summit (COP21) to ‘limit’ global warming to two degrees.