APIS - Automated Plant Irrigation System. The HISTORY: There are quite a few instructables on the topic of plant watering, so I barely invented something original here. 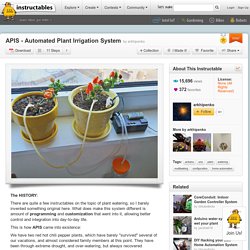 What does make this system different is amount of programming and customization that went into it, allowing better control and integration into day-to-day life. This is how APIS came into existence: We have two red hot chili pepper plants, which have barely "survived" several of our vacations, and almost considered family members at this point. They have been through extreme drought, and over-watering, but always recovered somehow. 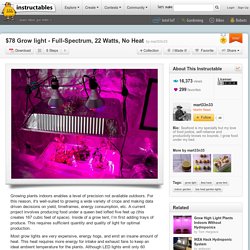 For this reason, it's well-suited to growing a wide variety of crops and making data driven decisions on yield, timeframes, energy consumption, etc. A current project involves producing food under a queen bed lofted five feet up (this creates 167 cubic feet of space). Inside of a grow tent, I’m first adding trays of produce. This requires sufficient quantity and quality of light for optimal production. Most grow lights are very expensive, energy hogs, and emit an insane amount of heat. This DIY version consumes less than 22 watts of energy (half as much as a laptop) and can be run for less than $12/year* . *22 Watts × 8765 hours (one year) = 193 kWh (kWh = W × hr / 1000). Arduino Temperature Controlled Relay - Tutorial #6. In this project, we are going to build something very simple project, a temperature controlled relay that is used to turn on a dc fan. 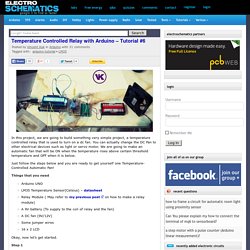 You can actually change the DC Fan to other electrical devices such as light or servo motor. We are going to make an automatic fan that will be ON when the temperature rises above certain threshold temperature and OFF when it is below. Just follow the steps below and you are ready to get yourself one Temperature-Controlled Automatic Fan!

Things that you need. Low-Power/powerDownWakeExternalInterrupt.ino at master · rocketscream/Low-Power. Low-Power/idleWakePeriodic.ino at master · rocketscream/Low-Power. SOLAR POWERED ARDUINO WEATHER STATION. In country like India most of the people are dependent on agriculture.For effective planning in agriculture weather forecast is of utmost importance.So farmers are always interested in the Weather Forecasts.As farmers stay in remote areas, they have to wait for the news updates in TV, Radio or News Papers.Unfortunately this weather information is not the accurate data of their local environment rather it gives data of nearest weather forecasting station.Being a son of a farmer, I decided to monitor the local weather and inform to my father earlier.So that he can take early decision for his farm. 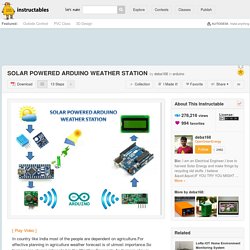 My weather stations typically consist of two major parts: 1. The sensors that sit outside and measure temperature,humidity, rainfall, and barometric pressure.This data is send wirelessly through a RF transmitter module to the display unit.I named the entire module as Transmitter module. (Tx). 2. Both the module are run by the arduino micro controllers. 1. 2. You can see it in the step-11 and 12. Raspberry Pi Solar Weather Station - English. Spurred on by the completion of my two previous projects, the Compact Camera and Portable Games Console, I wanted to find a new challenge. 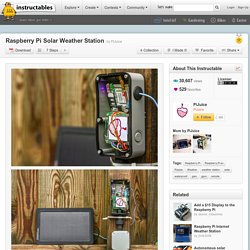 The natural progression was an outdoor remote system... I wanted to build a Raspberry Pi weather station that was able to sustain itself off grid and send me the results through a wireless connection, from anywhere! This project really has had its challenges, but luckily powering the Raspberry Pi is one of the main challenges that has been made easy by using the PiJuice as a power supply with it's added solar support. Learn.adafruit. How to display sensor information - Annikken. 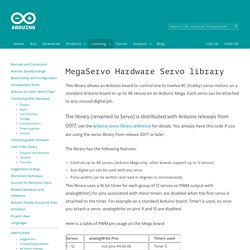 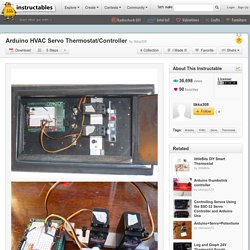 I am going to show you how to use an Arduino, two servo motors a temperature sensor and some metal (or wood) to make a digital thermostat for a through-wall HVAC unit. According to CB Richard Ellis (a major real estate firm), New York City is a renters market, with only about 1/3 of the population owning their home (versus almost 70% home ownership for the rest of the US). This means over 5mm people in NYC live in rented apartments or homes. F3WQ45EFTDBNLF9. Awesomely Automatic Garden Watering Buddy - Complete with Reservoir for Nutrients. I have the worst luck with remembering to water my tomatoes on a regular basis. 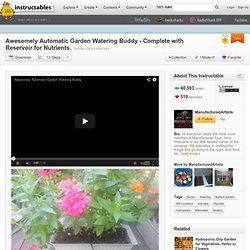 I've nearly killed them 3 times this spring already. So my roommate decided if left to my own devices we'd never get any this year. We looked into drip tape systems, but they still would have required me to turn the water on and off. And since we don't have a ton of room on our porch, I couldn't use as large pots as I should have to hold my tomato plants. To make up for the lack of nutrition available in the soil, I've been supplementing with hydroponic nutrient solution. Soil Moisture Sensor Video.