Something else the climate scientists missed: outgassing due to continental drift – Watts Up With That? From GFZ GEOFORSCHUNGSZENTRUM POTSDAM, HELMHOLTZ CENTRE When continents break it gets warm on Earth Rift zones released large amounts of CO2 from depth, which influenced global climate change. 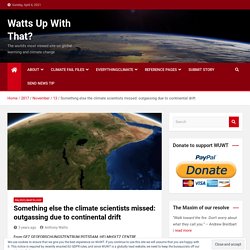 Twice as much carbon flowing from land to ocean than previously thought – Watts Up With That? Research News Every year 600-900 million tons of carbon flow through rivers to the ocean either as particles or in dissolved form. 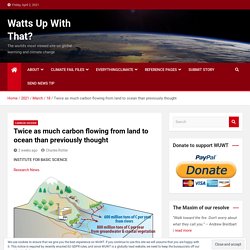 Researchers have known for a long time that this does not represent the total amount of carbon that gets transported from the land to the ocean. But the remaining contributors mostly from coastal ecosystems, such as carbon-rich mangrove forests, and from groundwater discharge into the ocean have been notoriously difficult to measure. A new study published in the journal Global Biogeochemical Cycles and spearheaded by Dr. Eun Young Kwon, project leader at the IBS Center for Climate Physics South Korea provides new estimates of this elusive component of the global carbon cycle.

What Causes Rising Atmospheric CO2? This post is prompted by a recent exchange with those reasserting the “consensus” view attributing all additional atmospheric CO2 to humans burning fossil fuels. 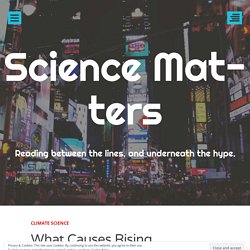 The IPCC doctrine which has long been promoted goes as follows. We have a number over here for monthly fossil fuel CO2 emissions, and a number over there for monthly atmospheric CO2. We don’t have good numbers for the rest of it-oceans, soils, biosphere–though rough estimates are orders of magnitude higher, dwarfing human CO2. So we ignore nature and assume it is always a sink, explaining the difference between the two numbers we do have. Easy peasy, science settled. What about the fact that nature continues to absorb about half of human emissions, even while FF CO2 increased by 60% over the last 2 decades? These and other issues are raised by Murray Salby and others who conclude that it is not that simple, and the science is not settled. 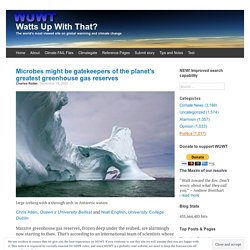 That’s according to an international team of scientists whose preliminary findings were recently reported in the Guardian. These deposits, technically called methane “gas hydrates”, are often described as “fiery ice” due to the parlour trick of burning atop a Bunsen burner what appears to be ice. The research is not yet peer-reviewed and has been controversial, with some climate scientists saying the Guardian article makes unsupported claims. We agree that findings should be peer-reviewed before they are reported. Methane is not as common as carbon dioxide, but it also contains carbon and is a potent greenhouse gas. Although seabed greenhouse gas thawing has been foreseen – and feared – for some time, it was only suspected to become a serious problem by the middle of this century. Is Mauna Loa Really The Best Location To Measure ‘Global’ CO2 Levels? 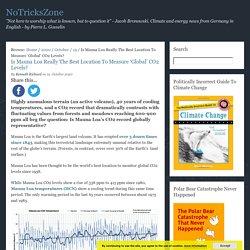 Mauna Loa is the Earth’s largest land volcano. It has erupted over 3 dozen times since 1843, making this terrestrial landscape extremely unusual relative to the rest of the globe’s terrain. (Forests, in contrast, cover over 30% of the Earth’s land surface.) Real Climate Science. CO2 levels have reached 408 PPM, and the press says people need breathing protection. 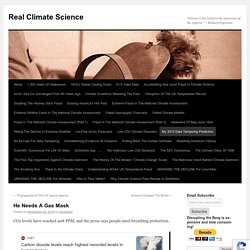 If you ride a train, you are inhaling 2,800 PPM CO2. Health Alert: Excessive CO2 on Sydney Trains – OnSolution Your car gets up to 6,000 PPM CO2. What is really behind the increase in atmospheric CO2? - edberry.com. Human CO2 emissions are not responsible for the increase in atmospheric CO2. So, climate change is natural - edberry.com. “The simple model shows how inflow affects level, how level affects outflow, and how balance occurs when outflow equals inflow. 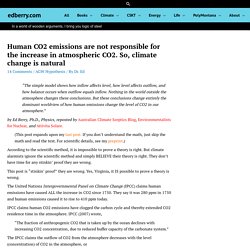 Nothing in the world outside the atmosphere changes these conclusions. But these conclusions change entirely the dominant worldview of how human emissions change the level of CO2 in our atmosphere.” by Ed Berry, Ph.D., Physics, reposted by Australian Climate Sceptics Blog, Environmentalists for Nuclear, and Attivita Solare. (This post expands upon my last post. If you don’t understand the math, just skip the math and read the text. According to the scientific method, it is impossible to prove a theory is right. This post is “stinkin’ proof” they are wrong. Scrutinizing the carbon cycle and CO2 residence time in the atmosphere. Who to Blame for Rising CO2? Source :NOAA Blaming global warming on humans comes down to two assertions: