On Human Nature and Human Progress with Noam Chomsky. Mehdi Hasan and Noam Chomsky on Biden vs. Trump. On Language and Humanity: In Conversation With Noam Chomsky. Amy Brand at The MIT Press Reader: Amy Brand: You have tended to separate your work on language from your political persona and writings. 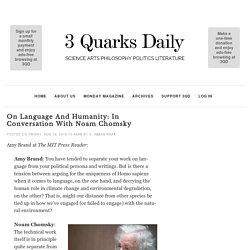 But is there a tension between arguing for the uniqueness of Homo sapiens when it comes to language, on the one hand, and decrying the human role in climate change and environmental degradation, on the other? That is, might our distance from other species be tied up in how we’ve engaged (or failed to engage) with the natural environment? Noam Chomsky: The technical work itself is in principle quite separate from personal engagements in other areas. There are no logical connections, though there are some more subtle and historical ones that I’ve occasionally discussed (as have others) and that might be of some significance.

Homo sapiens is radically different from other species in numerous ways, too obvious to review. As for the “tension” you refer to, I don’t quite see it. More here. Noam Chomsky at 90: On Orwell, Taxi Drivers, and Rejecting Indoctrination. Noam Chomsky was aptly described in a New York Times book review published almost four decades ago as “arguably the most important intellectual alive today.” 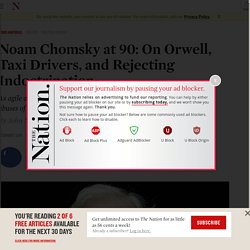 He was 50 then. Now he is 90, and on the occasion of his December 7 birthday, the German international broadcasting service Deutsche Welle observed, again aptly, that Chomsky is “arguably the foremost political dissident of the last half a century.” Noam Chomsky has the perfect explanation for what's wrong with libertarianism. Noam Chomsky reveals exactly what went wrong in the 2016 presidential election that gave us Trump. Noam Chomsky's Surprising Take on the Russia Scandal. Noam Chomsky has generally been one of the strongest intellectual voices of the left for decades. 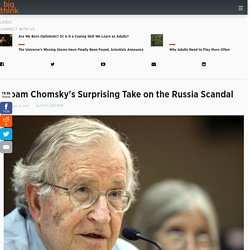 But he has an unexpected take on the growing scandal around President Trump and the alleged “collusion” with Russia. Noam Chomsky - New Atheists, Islamophobia, and the War on Terror. Noam Chomsky: Racing To The Precipice. Noam-chomsky-it-fair-worry-about-trump-staging-false-flag-terrorist-attack?akid=15365.2617. It's March 2017, and the political process and the media in the U.S. are a depressing mess, on top of an ever-growing pile of issues that are not remotely being addressed, much less resolved by society: inequality, climate change, a global refugee crisis, you name it. 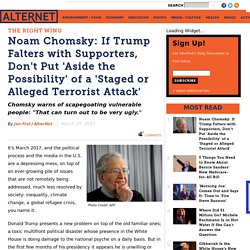 Donald Trump presents a new problem on top of the old familiar ones; a toxic multifront political disaster whose presence in the White House is doing damage to the national psyche on a daily basis. But in the first few months of his presidency it appears he is unwilling or unable to carry out almost any of the campaign promises he made to his base. Repealing Obamacare was supposed to be a cinch -- well, that was a total disaster for Trump and the Republican party; the first big legislative rollout of his presidency, and it didn't even make it to a vote. What about canceling TPP? Noam Chomsky's Audacious Request For President Obama Before He Leaves Office. Photo Credit: Andrew Rusk/Flickr Retired MIT linguistics professor Noam Chomsky issued a video message on Friday December 23 regarding the critical problem faced by undocumented immigrants on the verge of a Trump presidency. 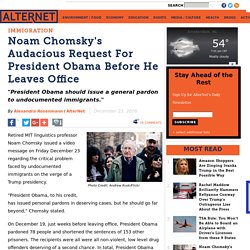 "President Obama, to his credit, has issued personal pardons in deserving cases, but he should go far beyond," Chomsky stated. On December 19, just weeks before leaving office, President Obama pardoned 78 people and shortened the sentences of 153 other prisoners. The recipients were all were all non-violent, low level drug offenders deserving of a second chance. In total, President Obama has pardoned 1,000 individuals since taking office; more than 50 times that of George W. Chomsky then dared the president to set a new record. Donald Trump has promised to immediately deport 2-3 million undocumented immigrants.

"As we have repeatedly said for years, only Congress can create legal status for undocumented individuals," a White House official told BuzzFeed. Watch: Noam Chomsky's Recipe for How to Make America Great Again. Photo Credit: Duncan Rawlinson/Wikimedia Noam Chomsky has frequently argued that not only do we not have a capitalist system, no capitalist system has ever survived. 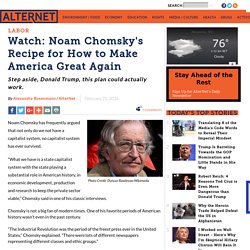 "What we have is a state capitalist system with the state playing a substantial role in American history, in economic development, production and research to keep the private sector viable," Chomsky said in one of his classic interviews. Chomsky is not a big fan of modern times. One of his favorite periods of American history wasn't even in the past century. "The Industrial Revolution was the period of the freest press ever in the United States," Chomsky explained. The working-class press was expressing the people's point of view. "[By participating in] wage labor, you are renting yourself, which is not that different from being a slave except that it will end sometime," says Chomsky. 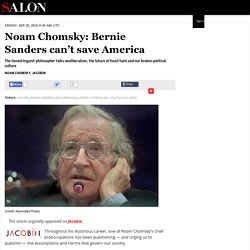 Throughout his illustrious career, one of Noam Chomsky’s chief preoccupations has been questioning — and urging us to question — the assumptions and norms that govern our society. The Value of Noam Chomsky. Debate Between Noam Chomsky and Michel Foucault on Human Nature. Noam Chomsky discusses Ferguson: “This is a very racist society; it’s pretty shocking” Earlier this week professor Noam Chomsky, linguist, political activist and one of the greatest thinkers of our time, sat down for an interview with GRITtv’s Laura Flanders. 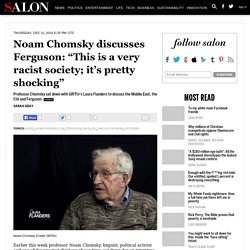 During the nearly 26-minute interview, Flanders and Chomsky discussed the war in Iraq, ISIL, the climate agreement with China, and Ferguson, Missouri, among other topics. On the subject of Ferguson and race in American society Chomsky delivered his take in the context of American history. Part of the interview has been transcribed below: “There are prospects, but it is going to be very hard. This is a very racist society; it’s pretty shocking. He continues later: “They have been re-criminalized and turned into a slave labor force — that’s prison labor.

The discussion of Ferguson begins 16 minutes and 50 seconds into the conversation. Noam Chomsky undresses Sam Harris: Stop “pretending to have a rational discussion” The popular atheist and torture-supporter Sam Harris recently tried to “engineer a public conversation” with radical linguist Noam Chomsky “about the ethics of war, terrorism, state surveillance, and related topics.” 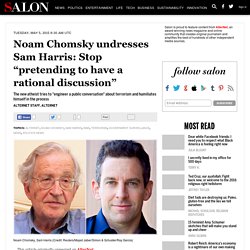 Harris shared the exchange publicly, chalking it up as an “unpleasant and fruitless encounter.” Readers might disagree. Noam — I reached out to you indirectly through Lawrence Krauss and Johann Hari and was planning to leave it at that, but a reader has now sent me a copy of an email exchange in which you were quite dismissive of the prospect of having a “debate” with me. So I just wanted to clarify that, although I think we might disagree substantially about a few things, I am far more interested in exploring these disagreements, and clarifying any misunderstandings, than in having a conventional debate. If you’d rather not have a public conversation with me, that’s fine. In any case, my offer stands, if you change your mind.

Perhaps I have some misconceptions about you. 1.