Investment theory of party competition. Overview[edit] However, this is different from a corporatist system, in which elite interests come together and bargain to create policy. 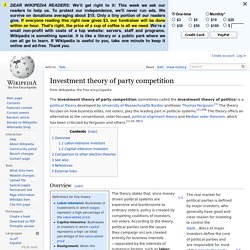 Comparison to other election theories[edit] See also[edit] References[edit] External links[edit] The "Virtual Senate" August 31, 2003 The Dominion - CHOMSKY: The term is not mine. 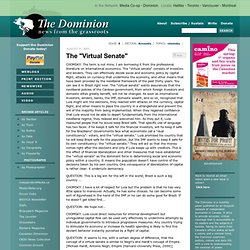 I am borrowing it from the professional literature on international economics. The "virtual senate" consists of investors and lenders. They can effectively decide social and economic policy by capital flight, attacks on currency that undermine the economy, and other means that have been provided by the neoliberal framework of the past thirty years. QUESTION: This is a big win for the left in the world; Brazil is such a big country ... CHOMSKY: I have a lot of respect for Lula but the problem is that he has very little space to maneuver. QUESTION: We hope not... CHOMSKY: Lula could direct resources for internal development but unregulated capital flow can be used very effectively to undermine attempts by individual governments to introduce progressive measures.

QUESTION: It seems to me, with a certain degree of difference, that the concept of a virtual senate is similar to Negri's and Hardt's concept of Empire. Noam Chomsky Resources. "As long as the Internet was under control of the Pentagon, it was free. 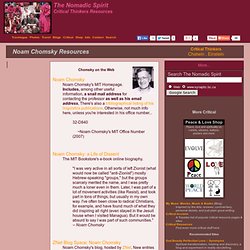 People could use it freely [for] information sharing. That remained true when it stayed within the state sector of the National Science Foundation. As late as about 1994, people like say, Bill Gates, had no interest in the Internet. He wouldn't even go to conferences about it, because he didn't see a way to make a profit from it. Now it's being handed over to private corporations, and they tell you pretty much what they want to do. Slavoj Žižek Responds to Noam Chomsky: ‘I Don’t Know a Guy Who Was So Often Empirically Wrong’

Earlier this month we posted an excerpt from an interview in which linguist Noam Chomsky slams the Slovenian philosopher and cultural critic Slavoj Žižek, along with the late French theorists Jacques Lacan and Jacques Derrida, for cloaking trivial ideas in obscure and inflated language to make them seem profound. 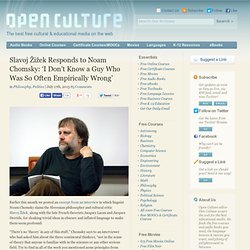 “There’s no ‘theory’ in any of this stuff,” Chomsky says to an interviewer who had asked him about the three continental thinkers, “not in the sense of theory that anyone is familiar with in the sciences or any other serious field. Try to find in all of the work you mentioned some principles from which you can deduce conclusions, empirically testable propositions where it all goes beyond the level of something you can explain in five minutes to a twelve-year-old. See if you can find that when the fancy words are decoded. I can’t. So I’m not interested in that kind of posturing. Chomsky’s remarks sparked a heated debate on Open Culture and elsewhere. Via Partially Examined Life. Noam Chomsky: The Kind of Anarchism I Believe in, and What's Wrong with Libertarians. May 28, 2013 | Like this article? 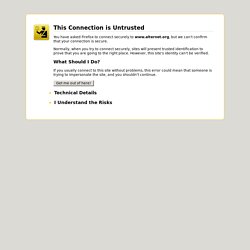 Join our email list: Stay up to date with the latest headlines via email. The following is the adapted text of an interview that first appeared in Modern Success magazine.So many things have been written about, and discussed by, Professor Chomsky, it was a challenge to think of anything new to ask him: like the grandparent you can’t think of what to get for Christmas because they already have everything. So I chose to be a bit selfish and ask him what I’ve always wanted to ask him. Michael S. Noam Chomsky: Well, anarchism is, in my view, basically a kind of tendency in human thought which shows up in different forms in different circumstances, and has some leading characteristics. Anarcho-syndicalism is a particular variety of anarchism which was concerned primarily, though not solely, but primarily with control over work, over the work place, over production. Chomsky: Well what’s called libertarian in the United States, which is a special U.