What did you do for the psychedelic renaissance? – Psychedelic Press. This is the editorial for the Psychedelic Press journal XVI (May 2016) and is written by Andy Roberts, author of newly published Acid Drops: Adventures in Psychedelia, and Albion Dreaming: A Popular History of LSD in Britain: We live in interesting times. 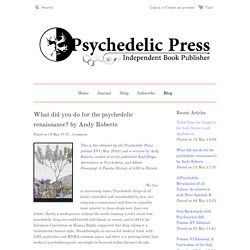 Psychedelic drugs of all kinds, controlled and uncontrolled by law, are enjoying a renaissance and there is arguably more interest in these drugs now than ever before. Barely a week passes without the media running a story about how psychedelic drug use could benefit individuals or society and in 2015 the European Convention on Human Rights suggested that drug taking is a fundamental human right. Breakthroughs in successful medical trials with LSD, psilocybin and MDMA continue apace and there is a growing belief that medical/psychotherapeutic use might be licensed within the next decade. Marijuana, Magic Mushrooms, Enlightenment, Ascension. Effects of Drugs on Spirituality. Bashar on Psychedelics. Silicon Valley’s Tech Kings Have A Secret Weapon: Psychedelic Drugs. When you think about the tech giants of California’s Silicon Valley, what comes to mind?

Stifling office buildings, men and women in business casual attire, and tons of wealthy investors? You’d better add drugs to the list. Psychedelic drugs, at least. It’s no secret that Steve Jobs used LSD when he was young and called it one of the more enlightening experiences of his life. So then it shouldn’t come as surprising that many others in Silicon Valley have taken to doing the same. They don’t do it to “fry balls” and chill out for a weekend.

“People report an overall increased capacity and productivity. Why Drugs Won't Lead To Higher Consciousness & What Will. Dennis McKenna: Legal Psychedelics Could End The... This Revolutionary Way Of Using Psychedelics Can Enhance Mental Function & Physical Ability. This Artist Photographs People On Drugs To Show How It Affects Them. Les Baker V is a talented photographer who embarked on an interesting project: to take a portrait of people on a variety of drugs, then overlay an image that symbolizes the substances they used in some meaningful way. 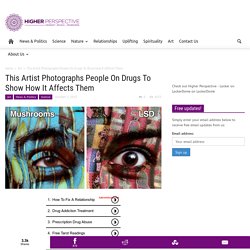 Of course, drugs are all dangerous at some level so we do not encourage trying to replicate something like this yourself. For more information, visit Baker’s website. Adderall Cocaine Crack Mushrooms Marijuana. She Was Given LSD, Psilocybin, & MDMA In The Final Days Before Her Death – What Happened After Was Beautiful. Mara Howell was in pain, the type of pain so severe it found her bedridden in a hospital at 33 years old. 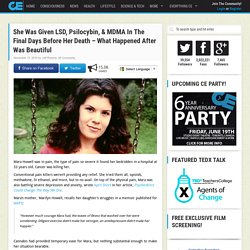 Cancer was killing her. Conventional pain killers weren’t providing any relief. She tried them all, opioids, methadone, IV ethanol, and more, but to no avail. On top of the physical pain, Mara was also battling severe depression and anxiety, wrote April Short in her article, Psychedelics Could Change The Way We Die. Psychedelics Could Change the Way We Die. When 33-year-old Mara Howell was dying of cancer, the pain she experienced was so severe that even the highest doses of opioids, methadone, IV ethanol and even an intrathecal pump weren’t working. 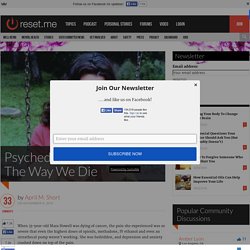 She was bedridden, and depression and anxiety crashed down on top of the pain. As Mara’s mother Marilyn Howell recalls in her memoir Honor Thy Daughter, published by the nonprofit Multidisciplinary Association for Psychedelic Studies (MAPS): “However much courage Mara had, the waves of illness that washed over her were unrelenting. Diligent exercise didn’t make her stronger, an antidepressant didn’t make her happier.” The only thing that helped at all was marijuana, but the help was subtle and less than ideal. Marilyn, a mind-body educator who developed the first psychophysical curriculum in public education, describes in her book how Mara’s pain didn’t seem to be stemming solely from physical problems.

Photo: Mara Howell The Science. Why Culture and Society Banned Psychedelic Plants – Terence McKenna. Each individual has the power to become great, to become special by understanding the core of his or her existence. 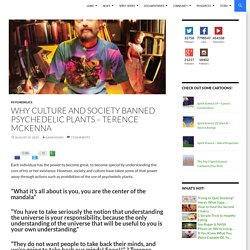 However, society and culture have taken some of that power away through actions such as prohibition of the use of psychedelic plants. ”What it’s all about is you, you are the center of the mandala” “You have to take seriously the notion that understanding the universe is your responsibility, because the only understanding of the universe that will be useful to you is your own understanding.” The Truth About Party Drugs. Like ATTN: on facebook for more content like this. 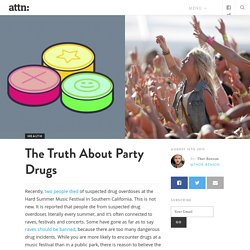 Recently, two people died of suspected drug overdoses at the Hard Summer Music Festival in Southern California. This is not new. It is reported that people die from suspected drug overdoses literally every summer, and it's often connected to raves, festivals and concerts. Some have gone as far as to say raves should be banned, because there are too many dangerous drug incidents. While you are more likely to encounter drugs at a music festival than in a public park, there is reason to believe the drugs are not the main issue and that there are ways to prevent these deaths that do not involve banning all music performances. How Psychedelics Saved My Life « Reset.me Reset.me. Amber Lyon is an Emmy Award-winning former CNN investigative news correspondent. 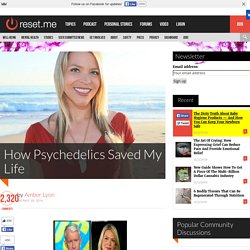 I invite you to take a step back and clear your mind of decades of false propaganda. Governments worldwide lied to us about the medicinal benefits of marijuana. The Attraction for Drugs is Spiritual – Osho. Drugs are as old as humanity itself, and they certainly fulfill something of immense value. 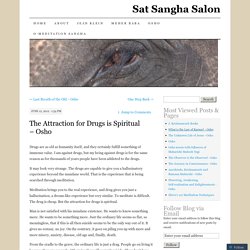 I am against drugs, but my being against drugs is for the same reason as for thousands of years people have been addicted to the drugs. It may look very strange. The drugs are capable to give you a hallucinatory experience beyond the mundane world.