Over $1 Trillion Spent Since Nixon Began The War On Drugs - Shadowproof. Published in partnership with MintPress News. 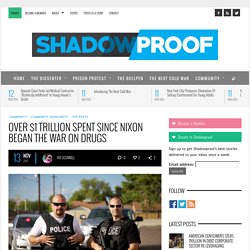 WASHINGTON — The “war on drugs” costs Americans a staggering amount of money every year that it persists. Despite the billions they receive, federal, state and local law enforcement have a proven inability to stem the flow of drugs on the nation’s streets. Since Richard Nixon declared a war on drugs in June 1971, the cost of that “war” had soared to over $1 trillion by 2010. Over $51 billion is spent annually to fight the drug war in the United States, according to Drug Policy Alliance, a nonprofit dedicated to promoting more humane drug policies. It’s also taken a massive toll on human lives. Still, we should take comfort in the fact that these are mostly violent criminals and hardened drug kingpins, right? In 2014, at least 620,000 people were arrested for simple pot possession — that’s 1,700 people per day, or more than 1 per minute.

A map of marijuana laws in the United States. The Drug War and Human Rights « LobeLog. Analysis Published on October 22nd, 2015 | by Guest by Michael LaSusa Adding to mounting public criticism of the “war on drugs,” a scathing new report from a coalition of human rights groups alleges that countries in the Americas have carried out the fight against the drug trade “in contradiction to their human rights obligations.” 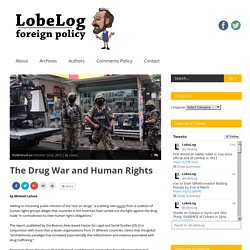 The report, published by the Buenos Aires-based Center for Legal and Social Studies (CELS) in conjunction with more than a dozen organizations from 11 different countries, claims that the global “prohibitionist paradigm has increased exponentially the militarization and violence associated with drug trafficking.” Moreover, these groups say that militarized, prohibitionist approaches have “disproportionately affect[ed] particularly vulnerable groups” and have “hindered the development of a coherent and comprehensive public health model capable of addressing the risks and harm related to narcotics use.” Narcotics Reform Spreads US as Biggest Pusher. The black/white marijuana arrest gap, in nine charts. As you're probably aware, black Americans are arrested for marijuana possession far more frequently than whites. 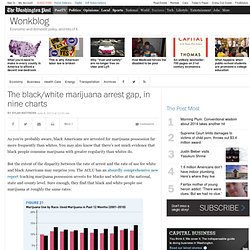 You may also know that there's not much evidence that black people consume marijuana with greater regularity than whites do. But the extent of the disparity between the rate of arrest and the rate of use for white and black Americans may surprise you. The ACLU has an absurdly comprehensive new report tracking marijuana possession arrests for blacks and whites at the national, state and county level. Sure enough, they find that black and white people use marijuana at roughly the same rates: In at least one year, the white usage rate was higher. And more blacks say they've never used marijuana: Of course, this doesn't translate to roughly equal arrest rates. And this is a uniform phenomenon. Similarly, the vast majority of counties arrest blacks at a higher rate than whites, with some having a disparity of greater than 10 to 1:

Jose Guerena Killed: Arizona Cops Shoot Former Marine In Botched Pot Raid. On May 5 at around 9:30 a.m., several teams of Pima County, Ariz., police officers from at least four different police agencies armed with SWAT gear and an armored personnel carrier raided at least four homes as part of what at the time was described as an investigation into alleged marijuana trafficking. 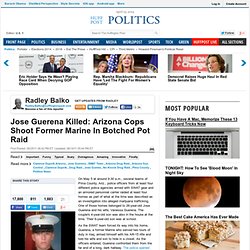 One of those homes belonged to 26-year-old Jose Guerena and his wife, Vanessa Guerena. The couple's 4-year-old son was also in the house at the time. Their 6-year-old son was at school. As the SWAT team forced its way into his home, Guerena, a former Marine who served two tours of duty in Iraq, armed himself with his AR-15 rifle and told his wife and son to hide in a closet. As the officers entered, Guerena confronted them from the far end of a long, dark hallway. UPDATE: An autopsy that was conducted later determined that Guerena was hit 23 times. The Pima County Sheriff's Department initially claimed (PDF) Guerena fired his weapon at the SWAT team. This is absurd. Stop the Drug War (DRCNet) - raising awareness of the consequences of prohibition. MikeCann.net. Amazonian healer jailed for possession of traditional medicine. By Tracy L. Barnett Images courtesy of Eduardo Santamaría and Celina De Leon Free Taita Juan campaign Editor’s note: Charges were thankfully dropped last week and Taita Juan has been freed.

Angela Dodge, a spokeswoman for the U.S. Attorney’s Office in Houston, told the Houston Chronicle on Tuesday that the felony charge against Juan Agreda-Chindoy, 42, was dismissed “in the interest of justice.” One of my most profound experiences on my journey through Latin America – and indeed, in my life – was an invitation to attend an indigenous ceremony last month with three shamans of the ancient Amazonian tradition of yagé, or ayahuasca. This herbal medicine, used throughout the centuries by traditional peoples in Brazil, Colombia, Peru and Ecuador for religious and healing purposes, produces powerful visions – considered by modern science to be hallucinations, but by its native practitioners to be a window onto another dimension.