This is Your Military on Drugs. Bales is far from the only soldier to use steroids, the possession of which without a doctor’s prescription counts as a violation of the Uniform Code of Justice. 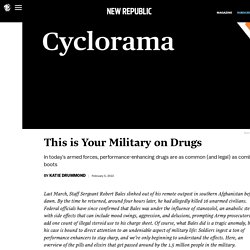 An estimated 1.9 percent of military personnel illegally use steroids, according to 2008 Pentagon data, up from 0.9 percent in 2002. Soldiers typically take the drugs, including mainstays stanozolol and oxymetholone (both banned by most major league sports due to their dramatic impact on strength), to enhance physical abilities during combat. The drugs are sometimes smuggled to soldiers via mail-order packages that conceal the products, or else are sold to them by American contractors working on base.

Despite being banned by the military, officials do little to thwart the use of steroids, largely because of cost concerns: Screenings run hundreds of dollars apiece. Energy Drinks “Go Pills” For decades, the Air Force has been doling out amphetamines—dubbed “go pills”—meant to keep pilots awake and alert during longflights. Super Soldiers? Military Drug is Rage Among Students, Young Professionals. In 2003, David Plotz, a busy writer and father of a toddler, was feeling sleep-deprived and run-down. 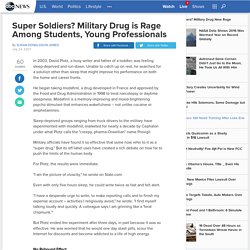 Unable to catch up on rest, he searched for a solution other than sleep that might improve his performance on both the home and career fronts. He began taking modafinil, a drug developed in France and approved by the Food and Drug Administration in 1998 to treat narcolepsy or daytime sleepiness. Modafinil is a memory-improving and mood-brightening psycho stimulant that enhances wakefulness -- not unlike cocaine or amphetamines. Sleep-deprived groups ranging from truck drivers to the military have experimented with modafinil, marketed for nearly a decade by Cephalon under what Plotz calls the "creepy, pharma-Orwellian" name Provigil. Military officials have found it so effective that some now refer to it as a "super drug. " For Plotz, the results were immediate. "I am the picture of vivacity," he wrote on Slate.com. Super Soldiers? Military Drug is Rage Among Students, Young Professionals. Soldiers Have Used Drugs to Enhance Their Killing Capabilities in Basically Every War - VICE.

In November 2008, ten members of Lashkar-e-Taiba, an Islamic militant group, carried out a series of 12 shooting and bombing attacks, killing 164 people and wounding another 300. 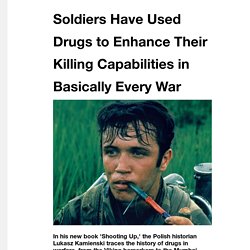 For almost 60 hours, in the aftermath of the destruction they had wreaked, they were able to hold off hundreds of India's best-trained special forces, before they were eventually killed or captured. The Lashkar-e-Taiba members had received months of commando-style training. They were an elite fighting unit.

But they were also high. Evidence from the scene, as well as later blood tests, found that at least some of the men had been using cocaine, LSD, and steroids. In his new book Shooting Up, the Polish historian Lukasz Kamienski demonstrates that since warfare began, men and women have used drugs to enhance their military capabilities. In the 1980s, the military historian John Keegan responded to the question, "Why do soldiers fight? " And they also supplied drugs to German soldiers. 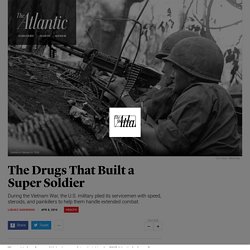 Either way, it was irregular: Vietnam was not a conventional war with the frontlines, rears, enemy mobilizing its forces for an attack, or a territory to be conquered and occupied. Instead, it was a formless conflict in which former strategic and tactical principles did not apply. The Vietcong were fighting in an unexpected, surprising, and deceptive way to negate Americans’ strengths and exploit their weaknesses, making the Vietnam War perhaps the best example of asymmetrical warfare of the 20th century. The conflict was distinct in another way, too—over time, it came to be known as the first “pharmacological war,” so called because the level of consumption of psychoactive substances by military personnel was unprecedented in American history. The British philosopher Nick Land aptly described the Vietnam War as “a decisive point of intersection between pharmacology and the technology of violence.”