Afganastan Narcautics. Failed and Funny War on Drugs Ad Campaigns. Fictional Depections of the Drug War. Rich vs Poor & The Drug war. The War of Pot. Joe Biden & The War on Drugs. El Chapo and the Faceless Future of Mexico's Drug War - Keegan Hamilton. The country’s last kingpin is now behind bars. 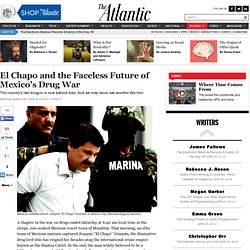 And we may never see another like him. Mexican soldiers escort Joaquín “El Chapo” Guzmán in Mexico City. (Reuters/Edgard Garrido) A chapter in the war on drugs ended Saturday at 6:40 am local time in the sleepy, sun-soaked Mexican resort town of Mazatlán. That morning, an elite team of Mexican marines captured Joaquín “El Chapo” Guzmán, the diminutive drug lord who has reigned for decades atop the international crime empire known as the Sinaloa Cartel. The unassuming hideout was just the first crack in El Chapo’s mythical façade. El Chapo was the perfect villain for the war on drugs—a boogeyman blamed for the insuppressible flow of cocaine, marijuana, heroin, and methamphetamine into the United States. From a cultural standpoint, the timing of Guzmán’s downfall seems fitting. Of course, the drug war will not magically end with El Chapo’s arrest. Beyond splintering, Mexican cartels are now faceless. Robert Reich - The nation’s war on drugs has been a total... PolicyMic - It's about time.

Obama Just Took One Big Step Towards Stopping the War on Drugs. The news: U.S. 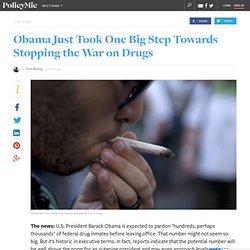 President Barack Obama is expected to pardon "hundreds, perhaps thousands" of federal drug inmates before leaving office. That number might not seem so big. But it's historic in executive terms. In fact, reports indicate that the potential number will be well above the norm for an outgoing president and may even approach levels not seen since President Gerald Ford gave mass clemency to draft dodgers after the Vietnam War. According to Yahoo News, the initiative to pardon non-violent drug offenders will be so big that "administration officials are preparing a series of personnel and process changes to help them manage the influx of petitions they expect Obama to approve.

" "There's all this bipartisan reform going on, but you have these people down there in their own little insular world and they just don't get it," a senior administration official told Yahoo News of the pardon attorney's office. Who will benefit from this? Drugs & War. Just Say No To These 11 Outrageous Arguments Against Legalizing Marijuana. Nearly 80 years ago, the feature film "Reefer Madness" hit theaters, projecting demonstrably false anti-marijuana propaganda all over the big screen. 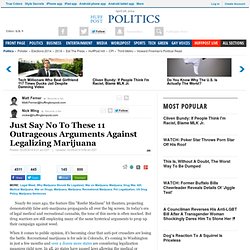 In today's era of legal medical and recreational cannabis, the tone of this movie is often mocked. But drug warriors are still employing many of the same hysterical arguments to prop up their campaign against weed. When it comes to public opinion, it's becoming clear that anti-pot crusaders are losing the battle. Recreational marijuana is for sale in Colorado, it’s coming to Washington in just a few months and over a dozen more states are considering legalization measures right now. In all, 20 states have passed laws allowing the medical or recreational use of marijuana, and with a majority of Americans now in favor of legal weed for the first time in U.S. history, the momentum is on marijuana's side. 1. Like pretty much any substance (or activity, for that matter), marijuana can be abused, and frequent use can lead to dependency. 2. 3. 4.

Pot and Prohibition. The Daily Bell is pleased to present this exclusive interview with Mark Thornton Daily Bell: Hello there. 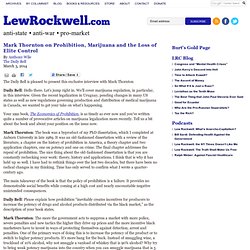 Let’s jump right in. We’ll cover marijuana regulation, in particular, in this interview. Given the recent legalization in Uruguay, pending changes in many US states as well as new regulations governing production and distribution of medical marijuana in Canada, we wanted to get your take on what’s happening. Your 1991 book, The Economics of Prohibition, is as timely as ever now and you’ve written quite a number of provocative articles on marijuana legalization more recently. Mark Thornton: The book was a byproduct of my PhD dissertation, which I completed at Auburn University in late 1989. DN! Inside the Dark Alliance: Gary Webb on the CIA, the Contras, and the Crack Cocaine Explosion. With the opening of the new Hollywood film "Kill the Messenger" this week, we look back at Democracy Now! 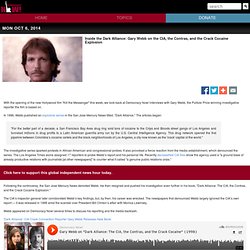 Interviews with Gary Webb, the Pulitzer Prize-winning investigative reporter the film is based on. In 1996, Webb published an explosive series in the San Jose Mercury News titled, "Dark Alliance. " The articles began: "For the better part of a decade, a San Francisco Bay Area drug ring sold tons of cocaine to the Crips and Bloods street gangs of Los Angeles and funneled millions in drug profits to a Latin American guerrilla army run by the U.S. Central Intelligence Agency. The investigative series sparked protests in African-American and congressional probes. Click here to support this global independent news hour today. Racism & The War on Drugs. Drug Cartels. Drug Smuggling & The CIA.