The United States of Adderall  Amber was out of control. 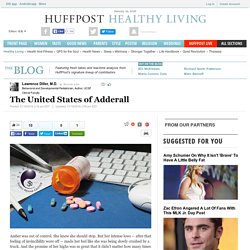 She knew she should stop. But her intense lows -- after that feeling of invincibility wore off -- made her feel like she was being slowly crushed by a truck. And the promise of her highs was so great that it didn't matter how many times she'd told herself she was done for good. Sitting at her dorm-room desk yet again, she placed three round pills on a fresh piece of white computer paper. She used the flat bottom of a lighter to smash them into a candy-blue powder. Amber (a fictional composite of several people) is never what I envisioned when I started prescribing stimulant drugs like Adderall and Ritalin to treat attention-deficit/hyperactivity disorder (ADHD) in kids more than 37 years ago. I wrote my first prescriptions for stimulants in 1978, when ADHD was still called hyperkinetic reaction of childhood -- a disorder confined, at the time, only to children. The notion that adults could even have the disorder was still very new. 9 Study Drugs Used By Students.

Drugs are not just used by college students to party anymore. 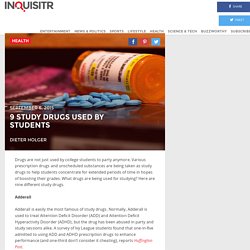 Various prescription drugs and unscheduled substances are being taken as study drugs to help students concentrate for extended periods of time in hopes of boosting their grades. What drugs are being used for studying? Here are nine different study drugs. Adderall Adderall is easily the most famous of study drugs. Ritalin Ritalin is similar to its amphetamine cousin Adderall and is also used to treat ADD and ADHD. Concerta Concerta is another drug among the family used to manage ADD and ADHD. Focalin The stimulant Focalin has similar effects at Adderall, Ritalin, and Concerta, leading students to use it as a study drug. Vyvanse Vyvanse is yet another stimulant that can be used to treat ADHD, making it an effective study drug. Modafinil Modafinil is a newer player in the study drug scene. Adrafinil Adrafinil is part of the same Nootropic drug family as Modafinil. Phenylpiracetam Caffeine Pills [Image via Flickr]

One night, one pill, one tragedy — and a mother’s mission. Josh Levine’s death, examined at the simplest level, was the doing of a pill. 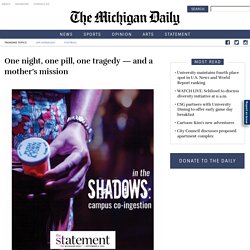 Small, round, and as visually unintimidating as an over-the-counter painkiller, the Adderall tablet was first prescribed to somebody not named Josh Levine, somebody who then presumably offered it to the 22-year-old at a Saturday-night party at a Chicago apartment. Somewhere along the line, the pill was crushed so it could be snorted. Once ingested, it went to work promoting a sense of alertness and energy that kept Levine, no stranger to alcohol, completely unaware he was pushing himself far, far beyond his own limits with every sip.

Levine, a 2014 University graduate who had accepted his first full-time job and moved to Chicago just weeks before the incident, was found unresponsive on a sidewalk in the early-morning hours of July 20, 2014. He suffered a fatal, alcohol-induced cardiac episode while walking home alone. Levine was declared brain-dead shortly after arriving at the hospital. Va. Beach suicide lawsuit against ex-psychiatrist settled. A lawsuit against a former Virginia Beach psychiatrist that was set to begin next week has been resolved out of court, according to a lawyer who represents the parents of Richard Fee, a Virginia Beach man who committed suicide in November 2011 after being prescribed escalating doses of Adderall. 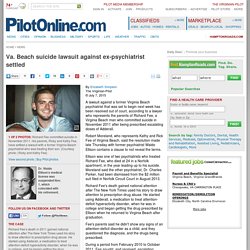 Robert Moreland, who represents Kathy and Rick Fee of Virginia Beach, said the resolution made late Thursday with former psychiatrist Waldo Ellison contains a clause to not reveal the terms. Ellison was one of two psychiatrists who treated Richard Fee, who died at 24 in a Norfolk apartment, in the year leading up to his suicide. Moreland said the other psychiatrist, Dr. Charles Parker, had been dismissed from the $2 million suit filed in Norfolk Circuit Court in August 2013. Richard Fee's death gained national attention after The New York Times used his story to draw attention to prescription drug abuse.

Ellison and Parker were investigated by the Virginia Board of Medicine regarding Fee's case. Workers Seeking Productivity in a Pill Are Abusing A.D.H.D. Drugs. Photo Fading fast at 11 p.m., Elizabeth texted her dealer and waited just 30 minutes for him to reach her third-floor New York apartment. 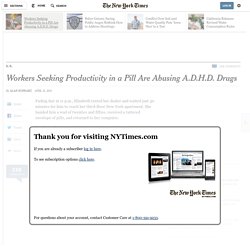 Jessica Simpson Scary Skinny Adderall Rumors. Using Adderall to Get Ahead, Not to Fight A.D.H.D. - Room for Debate. Watch a Brief Explainer on How Adderall Works. In case you need a little help focusing this morning, the American Chemical Society has just released short video explaining how Adderall works. 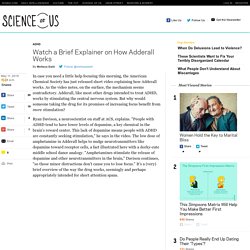 As the video notes, on the surface, the mechanism seems contradictory. Adderall, like most other drugs intended to treat ADHD, works by stimulating the central nervous system. But why would someone taking the drug for its promises of increasing focus benefit from more stimulation? WATCH: This Is What Adderall Does To Your Brain. It's a little pill that can make you hyper-focused, suppress your appetite, and improve your mood and energy levels. 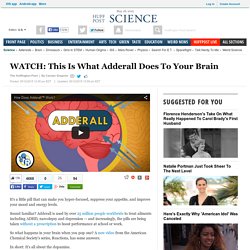 Sound familiar? Adderall is used by over 25 million people worldwide to treat ailments including ADHD, narcolepsy and depression -- and increasingly, the pills are being taken without a prescription to boost performance at school or work. So what happens in your brain when you pop one? A new video from the American Chemical Society's series, Reactions, has some answers. In short: It's all about the dopamine. "People with ADHD tend to have lower levels of dopamine, the key chemical in the brain's reward center," neuroscientist Dr. By stimulating the release of dopamine, amphetamines like Adderall keeps the brain from getting distracted by potential rewards in the environment -- from email alerts to nearby conversations to incoming text messages.