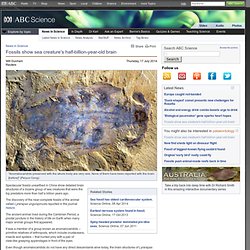 The discovery of the near-complete fossils of the animal called Lyrarapax unguispinusis reported in the journal Nature. The ancient animal lived during the Cambrian Period, a pivotal juncture in the history of life on Earth when many major animal groups first appeared. It was a member of a group known as anomalocaridids -- primitive relatives of arthropods, which include crustaceans, insects and spiders -- that hunted prey with a pair of claw-like grasping appendages in front of the eyes. Even though anomalocaridids do not have any direct descendants alive today, the brain structures of Lyrarapax closely resemble those of worm-like animals called velvet worms that crawl along the ground in tropical and semitropical forests in the southern hemisphere. Fish diversity exploded when dinosaurs went extinct. Beautifully-Preserved Trilobite. Unraveling the Whorl-Toothed Shark. Reconstructing the anatomy of prehistoric sharks isn’t easy. 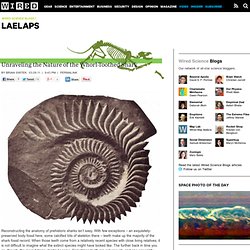 With few exceptions – an exquisitely-preserved body fossil here, some calcified bits of skeleton there – teeth make up the majority of the shark fossil record. When those teeth come from a relatively recent species with close living relatives, it is not difficult to imagine what the extinct species might have looked like. The further back in time you go, though, the more bizarre sharks become. Sometimes teeth are not enough, and one especially unusual set of teeth has vexed paleontologists for over a century. At first sight, the teeth didn’t look like they belonged to a shark at all. Karpinsky's original vision of what Helicoprion would have looked like. No known shark had a similar buzz-saw arrangement of teeth, and, although an exact date for it could not be pinned down, Helicoprion had clearly lived long before the appearance of modern sharks.

Karpinsky did not stick to his original idea. References: Eastman, C. (1900). Ediacaran Fauna (some of the oldest animals of all time!) 'Extinct' Animal Found Alive and Well in New Zealand. A tiny marine animal that was thought to be extinct for the past four million years has just been found living in New Zealand. 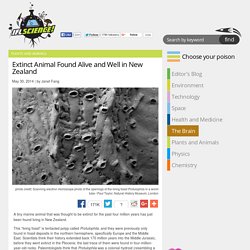 This “living fossil” is tentacled polyp called Protulophila, and they were previously only found in fossil deposits in the northern hemisphere, specifically Europe and the Middle East. Scientists think their history extended back 170 million years into the Middle Jurassic, before they went extinct in the Pliocene; the last trace of them were found in four-million-year-old rocks. Paleontologists think that Protulophila was a colonial hydroid (resembling a hydra) that’s related to corals and sea anemones.

The animal formed a network of channels and microscopic holes inside the chalky tubes of marine worms called serpulids. They found fossil evidence of tiny Protulophila polyps in a network of holes in a worm tube from young rocks (geologically speaking) that are less than a million years old. [Via NIWA] Photo Gallery. Cambrian Creatures: Primitive sea life. Megalodon size estimations. Megalodon tooth embedded in whale vertebrae. Fish to Amphibian Evolution. Ammonoidea. Ammonites are excellent index fossils, and it is often possible to link the rock layer in which a particular species or genus is found to specific geological time periods. 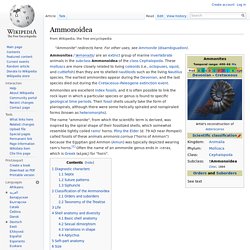 Their fossil shells usually take the form of planispirals, although there were some helically spiraled and nonspiraled forms (known as heteromorphs). Diagnostic characters[edit] Ammonites (subclass Ammonoidea) can be distinguished by their septa, the dividing walls that separate the chambers in the phragmocone, by the nature of their sutures where the septa joint the outer shell wall, and in general by their siphuncles. Septa[edit] Ammonoid septa characteristically have bulges and indentations and are to varying degrees convex from the front, distinguishing them from nautiloid septa which are typically simple concave dish-shaped structures. Suture patterns[edit] Three major types of suture patterns are found in the Ammonoidea: Goniatitic - numerous undivided lobes and saddles; typically 8 lobes around the conch. Life[edit]