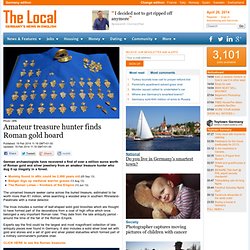 The unnamed treasure seeker came across the buried treasure, estimated to be worth more than €1 million, while searching a wooded area in southern Rhineland-Palatinate with a metal detector. 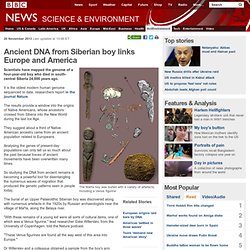 Modern archaeology. Chemists Show Life on Earth Was Not a Fluke (Op-Ed) This article was originally published at The Conversation. 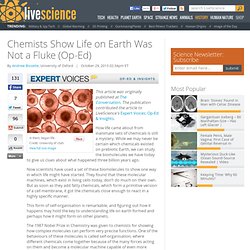 The publication contributed the article to LiveScience's Expert Voices: Op-Ed & Insights. How life came about from inanimate sets of chemicals is still a mystery. While we may never be certain which chemicals existed on prebiotic Earth, we can study the biomolecules we have today to give us clues about what happened three billion years ago. Now scientists have used a set of these biomolecules to show one way in which life might have started. They found that these molecular machines, which exist in living cells today, don’t do much on their own. This form of self-organisation is remarkable, and figuring out how it happens may hold the key to understanding life on earth formed and perhaps how it might form on other planets.

The 1987 Nobel Prize in Chemistry was given to chemists for showing how complex molecules can perform very precise functions. Stano and his colleagues do not yet understand why this happened. Dino impact also destroyed bees, says study. 25 October 2013Last updated at 10:44 ET The team found the signal of a mass extinction in the DNA of carpenter bees Scientists say there was a widespread extinction of bees 66 million years ago, at the same time as the event that killed off the dinosaurs. 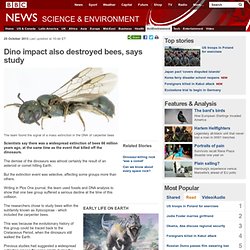 The demise of the dinosaurs was almost certainly the result of an asteroid or comet hitting Earth. But the extinction event was selective, affecting some groups more than others. Writing in Plos One journal, the team used fossils and DNA analysis to show that one bee group suffered a serious decline at the time of this collision. 4,000-Year-Old Tomb Of Doctor To The Pharaohs Discovered (PHOTO) Chinese Mummy Unearthed But Then Suddenly Vanishes (PHOTO) Zenobia: Empress of the East. Etruscan Warrior Prince Actually A Princess, Bone Analysis Reveals. What Digitization Will Do for the Future of Museums. 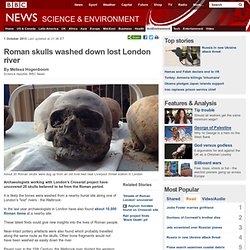 It is likely the bones were washed from a nearby burial site along one of London's "lost" rivers - the Walbrook. In the last year archaeologists in London have also found about 10,000 Roman items at a nearby site. These latest finds could give new insights into the lives of Roman people. Near-intact pottery artefacts were also found which probably travelled along the same route as the skulls. Paved over in the 15th Century, the Walbrook river divided the western and eastern parts of the city, its moist muddy walls providing exceptionally good conditions for artefacts to be preserved. "It's relatively unusual to find so many concentrated [in one area] when you're not in a graveyard. New timeline for origin of ancient Egypt. 3 September 2013Last updated at 20:51 ET By Rebecca Morelle Science reporter, BBC World Service Archaeological digs in Egypt reveal where the First Dynasty kings of Egypt are buried - but until now a timeline has been difficult to establish A new timeline for the origin of ancient Egypt has been established by scientists. 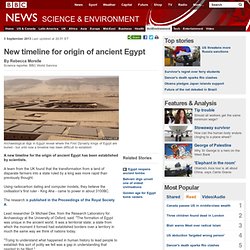 A team from the UK found that the transformation from a land of disparate farmers into a state ruled by a king was more rapid than previously thought. Using radiocarbon dating and computer models, they believe the civilisation's first ruler - King Aha - came to power in about 3100BC. Ancient Europe: 50,000 BC to AD 500. THE VIKINGS. THE VIKINGS:Combat equipment and fighting techniques Throughout the Dark Ages, war was a fact of life in many areas. 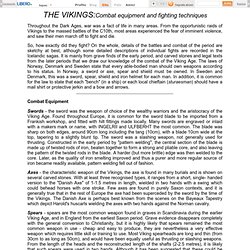 From the opportunistic raids of Vikings to the massed battles of the C10th, most areas experienced the fear of imminent violence, and saw their men march off to fight and die. So, how exactly did they fight? A viking war ? -   Vikings in Aquitaine.

Enki. A large number of myths about Enki have been collected from many sites, stretching from Southern Iraq to the Levantine coast. 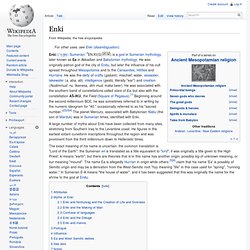 He figures in the earliest extant cuneiform inscriptions throughout the region and was prominent from the third millennium down to Hellenistic times. Attributes[edit] History - Rome's Pivotal Emperors. History: Romans.