Discover the "Brazen Bull," the Ancient Greek Torture Machine That Doubled as a Musical Instrument. History is replete with brutally imaginative torture and execution techniques. 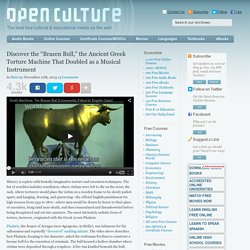 The list of cruelties includes crucifixion, where victims were left to die on the cross; the rack, where torturers would place the victim on a wooden frame to be slowly pulled apart; and hanging, drawing, and quartering—the official English punishment for high treason from 1351 to 1870—where men would be drawn by horse to their place of execution, hung until near-death, and then emasculated and disemboweled before being decapitated and cut into quarters. The most intricately sadistic form of torture, however, originated with the Greek tyrant Phalaris.

25 Insane Murders Throughout History That Were Absolutely Brutal. Death is something that can't be avoided, no matter what you do. 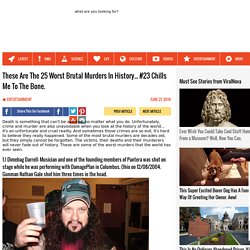 Unfortunately, crime and murder are also unavoidable when you look at the history of the world... it's an unfortunate and cruel reality. And sometimes those crimes are so evil, it's hard to believe they really happened. Some of the most brutal murders are decades old, but they simply cannot be forgotten. The victims, their deaths and their murderers will never fade out of history. These are some of the worst murders that the world has ever seen. 1.) List 25 2.) 3.) 4.) 5.) 6.) 7.) 8.) 9.) 10.) Most Brutal Execution Methods #2: Scaphism. Welcome to part two of the most brutal execution methods known to man. 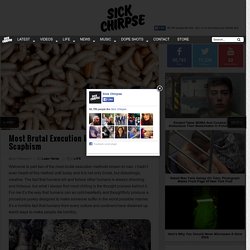 I hadn’t even heard of this method until today and it is not only brutal, but disturbingly creative. The fact that humans kill and torture other humans is always shocking and hideous, but what I always find most chilling is the thought process behind it. For me it’s the way that humans can so cold-heartedly and thoughtfully produce a procedure purely designed to make someone suffer in the worst possible manner. It’s a horrible fact that humans from every culture and continent have dreamed up weird ways to make people die horribly. Scaphism, otherwise known as “the boats” is possibly one of the darkest and grossest ways of ending someone’s life. So this is how it worked: the poor person to be killed would be securely tied between two wooden canoes (or hollowed out tree trunks) with their head and legs protruding.

Death would be slowww… ☛ Read Next: Most Brutal Execution Methods #1: Blowing From A Gun. Unusual Historicals: Executed: Torture under Vlad the Impaler. "Braveheart": Execution and Womenfolk. In response to the many questions about the butchery of Wallace, the following description was uploaded to the Screenwriters' Forum on CompuServe:- Wallace was tried in Westminster Hall (which today is part of the Palace of Westminster at the House of Commons entrance and close to the eastern end of the Abbey). 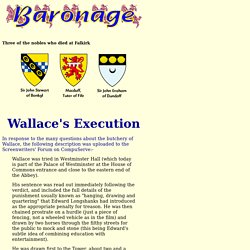 His sentence was read out immediately following the verdict, and included the full details of the punishment usually known as "hanging, drawing and quartering" that Edward Longshanks had introduced as the appropriate penalty for treason. He was then chained prostrate on a hurdle (just a piece of fencing, not a wheeled vehicle as in the film) and drawn by two horses through the filthy streets for the public to mock and stone (this being Edward's subtle idea of combining education with entertainment). He was drawn first to the Tower, about two and a half miles, and then on to Smithfield via Aldgate, another mile. He was hanged, but cut down while still alive. 1649: Saint Jean de Brébeuf, missionary to the Huron. It was on this date that the Jesuit missionary Saint Jean de Brébeuf was martyred by indigenous Iroquois near present-day Midland, Ontario. 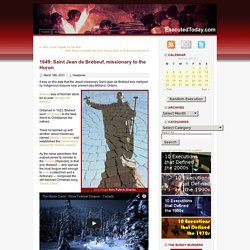 Ordained in 1622, Brebeuf soon decamped to the New World to Christianize the natives. As the name advertises, this outpost aimed to minister to the Hurons (Wyandot); to that end, Brebeuf — who learned the local tongue well enough to write a catechism and a dictionary — composed the still-beloved Christmas song “Huron Carol”. Brebeuf’s own missives recording Huron established him an energetic chronicler who has been styled Canada’s first serious ethnographer. For instance, Brebeuf on the POW treatment he saw the Huron dish out: Well … not just yet. Brebeuf regrettably foreshadowed his own ghastly fate, for during his ministry, the Huron and Iroquois went to war. On March 16, 1649, Iroquois captured Brebeuf and Lalemant, and subjected them to a horrific death just like the sort of thing Brebeuf had seen inflicted by the Huron. Top 10 Historic Brutal Executions list. Saint Andrew Bobola 1657 Saint Andrew was an advisor, preacher, and teacher of the Jesuits. 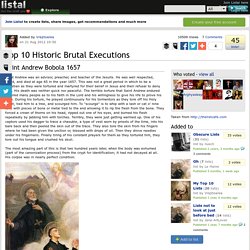 He was well respected, loved, and died at age 65 in the year 1657. This was not a great period in which to be a Christian as they were tortured and martyred for their belief in Jesus and their refusal to deny Him. His death was neither quick nor peaceful. The terrible torture that Saint Andrew endured inspired many people as to his faith in the Lord and his willingness to give his life to prove his faith. The most amazing part of this is that two hundred years later, when the body was exhumed (part of the canonization process) from the crypt for identification; it had not decayed at all. 2 Votes Isaiah 740 BC Many religious historians believe that Isaiah was executed by sawing, a type of capital punishment used in that period. 1 Vote Li Si 208 BC Mithridates 401 BC Scaphism is a form of extended or drawn out death that is so insidious I am ashamed to be a part of a species that would invent it. 1584: Balthasar Gerard, assassin of William the Silent.

July 14th, 2013 dogboy “If you succeed in your enterprise, the King will fulfill all his promises, and you will gain an immortal name besides.”— Christoffel d’Assonleville, to Balthasar Gérard After 4 days of torture, on this date in 1584, Balthasar Gérard (Geeraerts) finally met his end by beheading on the wheel. 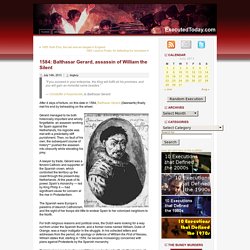 Gérard managed to be both historically important and wholly forgettable: an assassin working for Spain against the Netherlands, his regicide was met with a predictably stiff punishment.