Oldest pyramid ever found in Crimea By Aliye Bekir. A Ukrainian scientist discovered the oldest pyramid in the world. 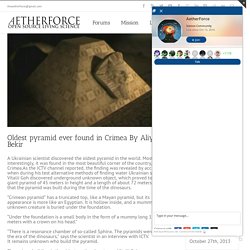 Most interestingly, it was found in the most beautiful corner of the country, in Crimea.As the ICTV channel reported, the finding was revealed by accident, when during his test alternative methods of finding water Ukrainian scientist Vitalii Goh discovered underground unknown object, which proved to be a giant pyramid of 45 meters in height and a length of about 72 meters. Goh said that the pyramid was built during the time of the dinosaurs. “Crimean pyramid” has a truncated top, like a Mayan pyramid, but its appearance is more like an Egyptian. It is hollow inside, and a mummy of unknown creature is buried under the foundation.

“Under the foundation is a small body in the form of a mummy long 1.3-1.4 meters with a crown on his head.” “There is a resonance chamber of so-called Sphinx. The unique building is the oldest on the planet, says Vitalii Goh. Source: Crimean News Agency. Urine-fuelled distress signal. The UK laboratory behind the pee-powered mobile phone has gone a wee bit further and turned recycled photocopier paper into microbial fuel cells that instigate radio transmissions when fed fresh urine. 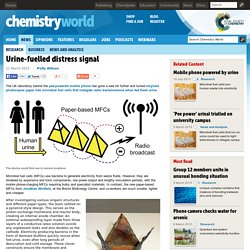 The device could find use in remote locations Microbial fuel cells (MFCs) use bacteria to generate electricity from waste fluids. However, they are hindered by expensive and toxic components, low power output and lengthy inoculation periods, with the mobile phone-charging MFCs requiring bulky and specialist materials. The 300,000-Year-Old Nanotechnology Artifacts of Russia.

An Oopart (out of place artifact) is a term applied to dozens of prehistoric objects found in variou... 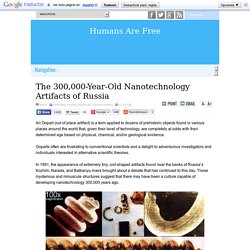 An Oopart (out of place artifact) is a term applied to dozens of prehistoric objects found in various places around the world that, given their level of technology, are completely at odds with their determined age based on physical, chemical, and/or geological evidence. Ooparts often are frustrating to conventional scientists and a delight to adventurous investigators and individuals interested in alternative scientific theories. In 1991, the appearance of extremely tiny, coil-shaped artifacts found near the banks of Russia’s Kozhim, Narada, and Balbanyu rivers brought about a debate that has continued to this day. These mysterious and minuscule structures suggest that there may have been a culture capable of developing nanotechnology 300,000 years ago.

The ancient coil-shaped artifacts were found in Russia’s Ural Mountains. In 1996, Dr. Related: Groundbreaking New Physics Surrounding Pyramids. The statues of Easter Island could have "walked" into place. There've been various mechanisms proposed for moving the moai. 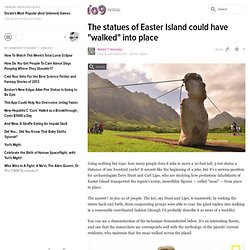 Another suggested technique involved sliding them on a layer of small round rocks, and then raising them upright by piling small rocks underneath them, lifting them a little, piling more rocks under them, and so on. This always seemed plausible to me as - having hiked across Easter Island - I can confirm that the island has an abundant supply of small round rocks. Moreover, they roll extremely well, particularly if you're unlucky enough to put your foot down on them. (insert unhappy face) I'm not sure that all the moai have the long-bodied form. It's quite possible that there were not only different designs, but different techniques for moving them. The Easter Island “Heads” Have Bodies. Prediction #5: Plasma Formations in the Ancient Sky. Plasma scientists are now comparing electrical discharge formations in the laboratory to rock art images around the world. 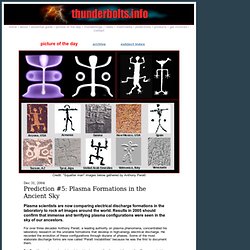 Results in 2005 should confirm that immense and terrifying plasma configurations were seen in the sky of our ancestors. For over three decades Anthony Peratt, a leading authority on plasma phenomena, concentrated his laboratory research on the unstable formations that develop in high-energy electrical discharge. He recorded the evolution of these configurations through dozens of phases. Some of the most elaborate discharge forms are now called “Peratt Instabilities” because he was the first to document them. Great Pyramid Starmap Etching Depicts Age of 9200 bce (Make Viral All!) WORLD HISTORY AND BOSNIAN PYRAMIDS 2011 - Fondacija “Arheološki park: Bosanska piramida Sunca, Archaeological Park: Bosnian Pyramid of the Sun Foundation. Almost everything they teach us about the ancient history is wrong: origin of men, civilizations and pyramids. 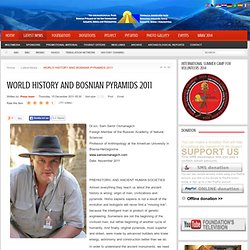 Homo sapiens sapiens is not a result of the evolution and biologists will never find a “missing link”, because the intelligent man is product of genetic engineering. Sumerians are not the beginning of the civilized men, but rather beginning of another cycle of humanity. And finally, original pyramids, most superior and oldest, were made by advanced builders who knew energy, astronomy and construction better than we do. In order to understand the ancient monuments, we need to view them through three realms: physical, energy and spiritual. Our scientific instruments are simply not enough to explain the purpose of oldest pyramids, for example. Gap between physical and spiritual science is to be bridged if we want to get fully understanding of the past. Twelve hundred ton stone block in Baalbeck (Lebanon) needs explanation.

The Holy Grail Vortex - Haarp and Egyptian Levitation Part 6 of 9 (free power) ,see to believe! The secret of the technology used in crystal skulls has stil not been unraveled.