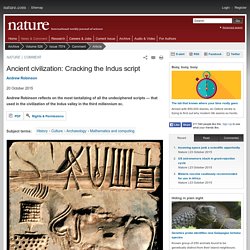 The Indus civilization flourished for half a millennium from about 2600 bc to 1900 bc. Then it mysteriously declined and vanished from view. It remained invisible for almost 4,000 years until its ruins were discovered by accident in the 1920s by British and Indian archaeologists. Following almost a century of excavation, it is today regarded as a civilization worthy of comparison with those of ancient Egypt and Mesopotamia, as the beginning of Indian civilization and possibly as the origin of Hinduism. More than a thousand Indus settlements covered at least 800,000 square kilometres of what is now Pakistan and northwestern India. Most Indus settlements were villages; some were towns, and at least five were substantial cities (see 'Where unicorns roamed').

Follow the script Once seen, the seal stones are never forgotten. Three problems What we know Digital approach. Fusing Ancient Pre-Columbian Art with Pop Culture. Unaware that the Pre-Columbian sculptures he spent a lot of money on were fake, Nadín Ospina found a silver lining to the situation.

He came up with a brilliant idea to make his own “Pre-Columbian” pieces that are a little more difficult to mistake for ancient. He sculpted famous cartoon characters like The Simpsons, Mickey Mouse, and Snoopy imitating the styles that ancient Aztec, Mayan, and Incan people used. The fusion between mass pop culture and ancient art is as funny as it is ironic, hinting at themes of globalization and corruption. See Also ICONS RE-MIXED IN GHOULISH WATERCOLOR PAINTINGS Ospina’s work will be on display at SUNY Purchase from April 28 to July 14, 2013 as part of a group show titled Pre-Columbian Remix at the Neuberger Museum of Art. Via: Collabcubed.com. Apocryphal Bible Stories — Tom Gauld. 12 Drugs From Ancient Cultures And Where To Get Them. Your heart rate is slowing and you feel a little flushed. 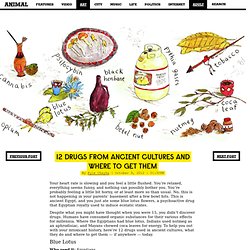 You’re relaxed, everything seems funny, and nothing can possibly bother you. You’re probably feeling a little bit horny, or at least more so than usual. No, this is not happening in your parents’ basement after a few bowl hits. This is ancient Egypt, and you just ate some blue lotus flowers, a psychoactive drug that Egyptian royalty used to induce ecstatic states. Despite what you might have thought when you were 15, you didn’t discover drugs. Blue Lotus Who used it: Egyptians. Ancient Roman Penises Got Wings. There’s a controversial policy in certain parts of Britain — if you find an ancient artifact, you can call dibs! 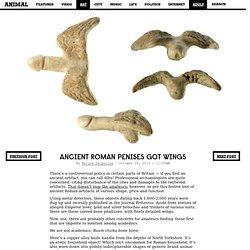 Professional archaeologists are quite concerned, citing disturbance of the cites and damages to the retrieved artifacts. That doesn’t stop the amateurs, however, as per this festive loot of ancient Roman artifacts of various shape, price and function. Using metal detectors, these objects dating back 1,600-2,000 years were dug up and recently published in the journal Britannia.

Aside from statues of alleged Emperor lover, gold and silver brooches and trinkets of various sorts, there are these carved bone phalluses, with finely detailed wings. But seriously... This sums up ancient guide books & morality quite brillian. Were Paleolithic Cave Painters High on Psychedelic Drugs? Scientists Propose Ingenious Theory for Why They Might Have Been. July 8, 2013 | Like this article? 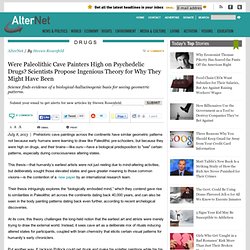 Join our email list: Stay up to date with the latest headlines via email. Prehistoric cave paintings across the continents have similar geometric patterns not because early humans were learning to draw like Paleolithic pre-schoolers, but because they were high on drugs, and their brains—like ours—have a biological predisposition to "see" certain patterns, especially during consciousness altering states. This thesis—that humanity’s earliest artists were not just reeling due to mind-altering activities, but deliberately sought those elevated states and gave greater meaning to those common visions—is the contention of a new paper by an international research team.

At its core, this theory challenges the long-held notion that the earliest art and atrists were merely trying to draw the external world. “Researchers also generally claim that the geometric hallucinations experienced by the subject are mental representations of these neural patterns,” they write. Voting with the Ancient Greeks. Voting with psephoi (pebbles) in a scene from the Wine Cup with the Suicide of Ajax, about 490 B.C., attributed to the Brygos Painter. 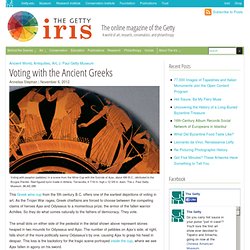 Red-figured kylix made in Athens. Terracotta, 4 7/16 in. high x 12 3/8 in. diam. The J. Paul Getty Museum, 86.AE.286 This Greek wine cup from the 5th century B.C. offers one of the earliest depictions of voting in art. The small dots on either side of the pedestal in the detail shown above represent stones heaped in two mounds for Odysseus and Ajax.

Voting with pebbles? Another modern word, ballot, preserves this ancient history of bean-counting: it comes from medieval French ballotte, a small ball. The pain of losing by one vote: Following Ajax's suicide, his lover Tekmessa drapes his fallen body.