The year 2014 in archaeology. 28 December 2014Last updated at 20:01 ET By Dr Louise Iles University of York It's been a fascinating year for ground-breaking archaeology around the globe, with cholera-stricken "vampires", armour made of bone, and the invention of trousers. 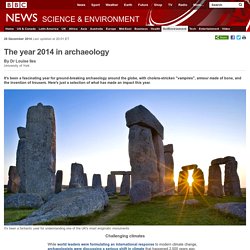 Here's just a selection of what has made an impact this year. History: Romans. Emergence of Agriculture in the Foothills of the Zagros Mountains of Iran. 10 Surprising Ancestral Origins Revealed by DNA Testing. How sure are you of your origins? 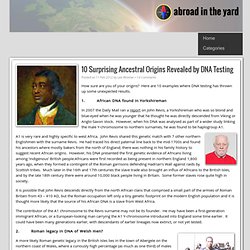 Here are 10 examples where DNA testing has thrown up some unexpected results. 1. African DNA found in Yorkshireman In 2007 the Daily Mail ran a report on John Revis, a Yorkshireman who was so blond and blue-eyed when he was younger that he thought he was directly descended from Viking or Anglo-Saxon stock. However, when his DNA was analysed as part of a wider study linking the male Y-chromosome to northern surnames, he was found to be haplogroup A1. A1 is very rare and highly specific to west Africa. It is possible that John Revis descends directly from the north African clans that comprised a small part of the armies of Roman Britain from 43 – 410 AD, but the Roman occupation left only a tiny genetic footprint on the modern English population and it is thought more likely that the source of his African DNA is a slave from West Africa. The contributor of the A1 chromosome to the Revis surname may not be its founder. 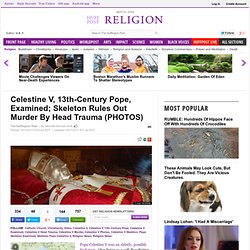 After living as a self-flagellating hermit in Italy, he served as pontiff for only five months before resigning at the end of the 13th century. Since his death, the so-called "Hermit Pope" has been the subject of much speculation and intrigue, with legend holding that the he was murdered by his successor, Boniface VIII. During examinations of Celestine's remains, a small, mysterious hole found on his skull led some to believe he died from trauma to the head. But a recent examination of the pope's skeleton suggests this murder theory might be false. Instead, Celestine may have died slowly from natural causes as he languished in Boniface's castle prison, where he was locked away soon after his resignation prompted fears that two popes could cause a schism in the Church.

Canonized by the Vatican in 1313, Celestine V was also one of the few popes to resign. Dr. What Ventura did not turn up, however, was a definitive cause of death. 'London In 1927' Video Shows Beautiful Color Images Filmed By Pioneering Filmmaker. This video, titled "London in 1927," is nothing short of exquisite. 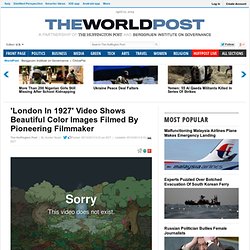 Shot by English cinematographer Claude Friese-Greene at the tail end of an 840-mile road trip through 1920s England, and scored with emotional music by English pop band Jonquil and French composer Yann Tiersen, the video is a gorgeous preservation of English urban life at the time. Friese-Greene, who had been filming English country life on his trip for a silent travelogue film called "The Open Road," returned to London in 1926 to turn his camera on his own hometown, a bustling, majestic city sunk deep in economic depression. Yet the images he captured show little of England's high unemployment and stagnant economy. Part of what is so remarkable about the film is how people don't appear to be camera shy. Friese-Greene made "The Open Road" largely as a way of marketing a new colored film technique he and his father had invented to Hollywood.

As the British Film Institute explains: Also on HuffPost: Secret streets of Britain's 'Atlantis' are revealed. A University of Southampton professor has carried out the most detailed analysis ever of the archaeological remains of the lost medieval town of Dunwich, dubbed 'Britain's Atlantis'. 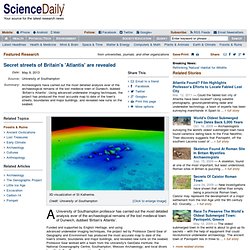 Funded and supported by English Heritage, and using advanced underwater imaging techniques, the project led by Professor David Sear of Geography and Environment has produced the most accurate map to date of the town's streets, boundaries and major buildings, and revealed new ruins on the seabed. Professor Sear worked with a team from the University's GeoData Institute; the National Oceanography Centre, Southampton; Wessex Archaeology; and local divers from North Sea Recovery and Learn Scuba. He comments, "Visibility under the water at Dunwich is very poor due to the muddy water.