Category:Business ethics. FEATURE-Scientist seeks to banish evil, boost empathy. * Psychopathology expert says idea of evil has done no good * Sees empathy as world's most valuable but ignored resource By Kate Kelland, Health and Science Correspondent LONDON, May 5 (Reuters) - Simon Baron-Cohen has been battling with evil all his life. As a scientist seeking to understand random acts of violence, from street brawls to psychopathic killings to genocide, he has puzzled for decades over what prompts such acts of human cruelty. Global Integrity. Globalisation isn't just about profits. It's about taxes too. The world looked on agog as Tim Cook, the head of Apple, said his company had paid all the taxes owed – seeming to say that it paid all the taxes it should have paid. 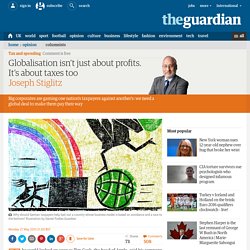 There is, of course, a big difference between the two. It's no surprise that a company with the resources and ingenuity of Apple would do what it could to avoid paying as much tax as it could within the law. While the supreme court, in its Citizens United case seems to have said that corporations are people, with all the rights attendant thereto, this legal fiction didn't endow corporations with a sense of moral responsibility; and they have the Plastic Man capacity to be everywhere and nowhere at the same time – to be everywhere when it comes to selling their products, and nowhere when it comes to reporting the profits derived from those sales.

It is not even true that higher corporate tax rates would necessarily significantly decrease investment. Category:Business ethics. International Business Ethics Institute (IBEI) Freedom and Democracy at Work. C4CR. New Paradigm in Humanising Corporate Management and Ethos. Dear Robert, Many thanks for your take on all this – all very interesting and clearly very deep. 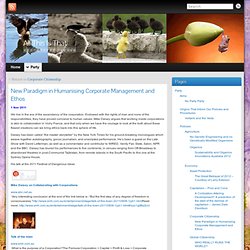 Your decades of TM seems to have piqued your interest in going beyond the entrenched capitalist zeitgeist in the sense that you want to keep the best of its benefits but also improve it to give it ethical innards and face so that not only will its worst excesses such as Enron, HIH, Madoff, the GFC itself, the present PIGS/Germany/France crisis will be avoided but also it will also evolve to be more inclusive of all of us to enjoy abundance fairly as a consequence of win-win-win (and more win) transactions and strategies rather than the macroscopic win-lose scenarios of late. 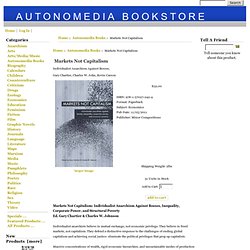 Gary Chartier & Charles W. Johnson Individualist anarchists believe in mutual exchange, not economic privilege. They believe in freed markets, not capitalism. They defend a distinctive response to the challenges of ending global capitalism and achieving social justice: eliminate the political privileges that prop up capitalists. Massive concentrations of wealth, rigid economic hierarchies, and unsustainable modes of production are not the results of the market form, but of markets deformed and rigged by a network of state-secured controls and privileges to the business class. Study: Hypocrisy the golden rule in negotiations. Folks with bargaining power behave selfishly, but believe themselves fair, an economics experiment suggests. 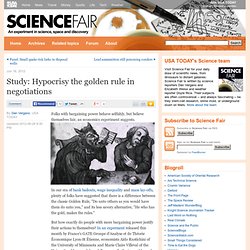 In our era of bank bailouts, wage inequality and mass lay-offs, plenty of folks have suggested that there is a difference between the classic Golden Rule, "Do unto 0thers as you would have them do unto you," and its less savory alternative, "He who has the gold, makes the rules. " But how exactly do people with more bargaining power justify their actions to themselves? In an experment released this month by France's GATE Groupe d'Analyse et de Théorie Économique Lyon‐St Étienne, economists Aldo Rustichini of the University of Minnesota and Marie Claire Villeval of the University of Lyon, ask how folks reconcile the two golden rules in their lives. What The Founding Fathers Thought About Corporations. How would the Founding Fathers feel about corporations? 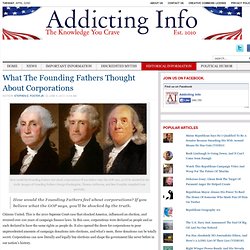 The Rich to the Poor: Do What I Say, Not What I Do. Economic policies often rest on assumptions about human motivation. 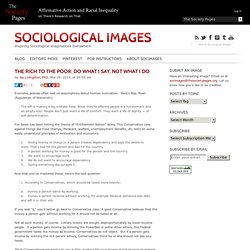