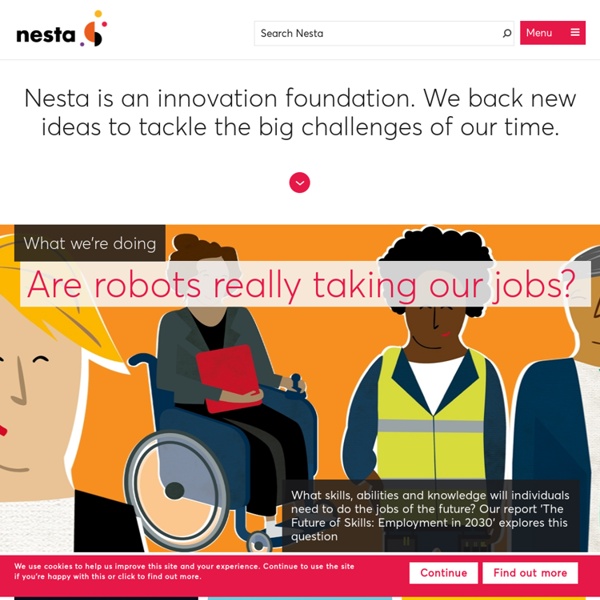 The 7 Most Important Data Mining Techniques Data mining is the process of looking at large banks of information to generate new information. Intuitively, you might think that data “mining” refers to the extraction of new data, but this isn’t the case; instead, data mining is about extrapolating patterns and new knowledge from the data you’ve already collected. Relying on techniques and technologies from the intersection of database management, statistics, and machine learning, specialists in data mining have dedicated their careers to better understanding how to process and draw conclusions from vast amounts of information. But what are the techniques they use to make this happen? Metadesigners Open Network An early prototype of The Lovers' Clock artwork See this set of notes on finding a more synergistic form of temporality

What is Innovation? 30+ definitions lead to one fresh summary - Fresh Consulting What is Innovation? 30+ definitions lead to one fresh summary: Fresh Thinking that Creates Value The Problem From the Economist to Wikipedia to Websters to Barack Obama to Innovation Zen, around the globe, we seek tangible answers for an intangible question: What is Innovation? 17 Data Science Applications & Examples You Should Know Data scientists tackle questions about the future. They start with big data, characterized by the three V’s: volume, variety and velocity. Then, they use it as fodder for algorithms and models. Is Revitalizing A Neighborhood What’s most striking when you enter the brick bunker formerly known as Stock House No. 3 is the green, says Fred Haberman, a cofounder and partner in Urban Organics, a futuristic farm housed inside a long-vacant structure on the former site of Hamm’s Brewery in East St. Paul. "It’s mind-boggling to come into this old building and see so much greenery," he says.

Resilient Cities - ICLEI: Home 15 April 2014 Together with eight international organizations ICLEI joined a new urban resilience partnership which was announced at the World Urban Forum in Medellin, Colombia last week. “There has been a tremendous outpouring of support for urban resilience in recent years. This new collaboration represents a consolidation of those efforts as we prepare for an explosion of urbanization in the 21st century” said Margareta Wahlström, UNISDR Chief and Co-patron of the Resilient Cities congress 2012 and 2013. The partnership has been established by UN-Habitat, UNISDR, The World Bank Group, the Global Facility for Disaster Reduction and Recovery (GFDRR); the Inter-American Development Bank (IDB); the Rockefeller Foundation; the 100 Resilient Cities Centennial Challenge Programme, pioneered by the Rockefeller Foundation; the C40 Cities Climate Leadership Group; and ICLEI - Local Governments for Sustainability.

Wikipedia - What is Innovation While something novel is often described as an innovation, in economics, management science, and other fields of practice and analysis it is generally considered a process that brings together various novel ideas in a way that they have an impact on society. Innovation differs from invention in that innovation refers to the use of a better and, as a result, novel idea or method, whereas invention refers more directly to the creation of the idea or method itself. Innovation differs from improvement in that innovation refers to the notion of doing something different rather than doing the same thing better. Inter-disciplinary views[edit] Society[edit] Due to its widespread effect, innovation is an important topic in the study of economics, business, entrepreneurship, design, technology, sociology, and engineering.

Controversial Data Science Experiments Data science is changing the game when it comes to manipulating data sets and visualizing big data. Knowing how to conduct a successful data science experiment is critical for businesses if they want to effectively target and understand their customers. With these experiments, comes a responsibility for understanding big data ethics. Urban Organics-Haberman Transforming the food system and strengthening local communities. Haberman believes in the pioneering spirit so much that sometimes we just have to take the plunge ourselves. At a new organic urban farm in St.