TUC Radio – Independent Radio on CDs, DVDs and the Internet. Introducing the First Draft Coalition – First Draft. Imagine the following situation: you’re sitting at your computer or looking at your mobile phone, when suddenly you come across a powerful first-person video on YouTube, or a visceral image on Twitter, depicting a breaking news event. 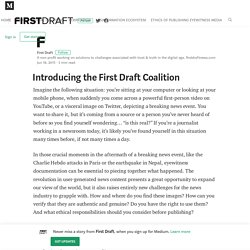 You want to share it, but it’s coming from a source or a person you’ve never heard of before so you find yourself wondering… “is this real?” If you’re a journalist working in a newsroom today, it’s likely you’ve found yourself in this situation many times before, if not many times a day. In those crucial moments in the aftermath of a breaking news event, like the Charlie Hebdo attacks in Paris or the earthquake in Nepal, eyewitness documentation can be essential to piecing together what happened. The revolution in user-generated news content presents a great opportunity to expand our view of the world, but it also raises entirely new challenges for the news industry to grapple with. How and where do you find these images? Unearthed: Investigative journalism from Greenpeace - Unearthed. 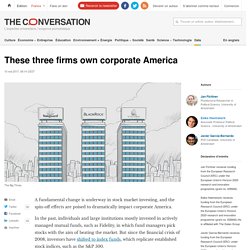 In the past, individuals and large institutions mostly invested in actively managed mutual funds, such as Fidelity, in which fund managers pick stocks with the aim of beating the market. But since the financial crisis of 2008, investors have shifted to index funds, which replicate established stock indices, such as the S&P 500. The magnitude of the change is astounding: from 2007 to 2016, actively managed funds have recorded outflows of roughly US$1,200 billion, while index funds had inflows of over US$1,400 billion.

In the first quarter of 2017, index funds brought in more than US$200 billion – the highest quarterly value on record. Democratising the market? This shift, arguably the biggest investment swing in history, is due in large part to index funds’ much lower costs. But other impacts of this seismic shift are far from democratising. Ask for Evidence. The Conversation : des analyses de l’actualité par des universitaires et chercheurs. National Observer. Brandalism. Collective-Evolution. Tactical Technology Collective. 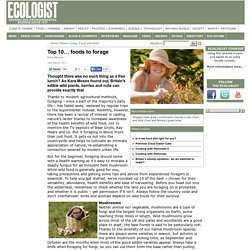 Recently, however, there has been a revival of interest in raiding nature’s larder thanks to increased awareness of the health benefits of wild food, not to mention the TV exploits of Bear Grylls, Ray Mears and co. But it foraging is about more than just food. It gets us out into the countryside and helps to cultivate an intimate appreciation of nature, re-establishing a connection severed by modern urban life. But for the beginner, foraging should come with a health warning as it’s easy to mistake a deadly fungus for an innocent field mushroom. While wild food is generally good for you, taking precautions and getting some tips and advice from experienced foragers is essential. Mushrooms Neither animal nor vegetable, mushrooms are a type of fungi and the largest living organisms on Earth, some reaching three miles in length. Russell Brand Trews. RSA Animate.