Solar Is Cheapest Energy: Renewable Energy vs. Fossil Fuels Cost. The International Energy Agency (IEA) says the cost per megawatt to build solar plants is below fossil fuels worldwide for the first time.Public success stories like Elon Musk's solar and wind battery farm in Australia have helped move public sentiment.All four IEA scenarios include a mix of renewables as well as nuclear and the world's remaining fossil fuel plants. 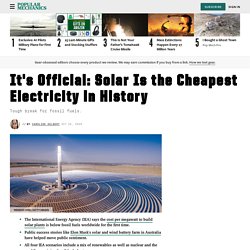 In a new report, the International Energy Agency (IEA) says solar is now the cheapest form of electricity for utility companies to build. Meet Luca: TU Eindhoven's car made from recycled waste. Members of Eindhoven University of Technology's TU/ecomotive student team have unveiled Luca - an electric car made almost entirely out of recycled waste, a significant amount of which was fished out of our oceans. 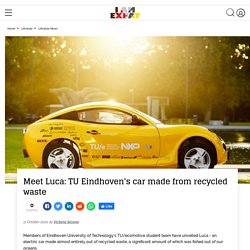 Luca the “waste car” As a planet, we produce around 2,1 billion tonnes of waste per year, and members of the TU/ecomotive team wanted to demonstrate a way that this waste could be reused in a new and useful manner, and prove that, in project manager Lisa van Etten’s own words, sustainable technology can be sexy.

The team started working on Luca in February 2019, presenting the designs and plans they had for the car in December. Now, less than a year later, the team has built a revolutionary car. Ten things you should do before you switch the heating on this winter! Remember the summer? 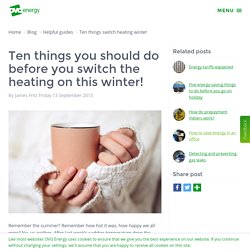 Remember how hot it was, how happy we all were? How much does turning down the thermostat save? (68 vs 70) You won’t believe how much you can save every month just by turning your thermostat down 3 degrees. 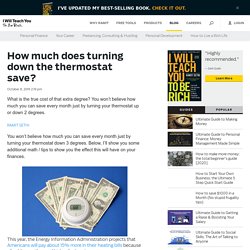 Below, I’ll show you some additional math / tips to show you the effect this will have on your finances. This year, the Energy Information Administration projects that Americans will pay about 15% more in their heating bills because of colder weather and higher fuel costs. LinkedIn. Passive Cooling – An Alternative to Expensive Cooling Systems. Passive cooling is a non-mechanical means of cooling homes, using an approach to building design that controls the heat entering the structure and encourages its dissipation. 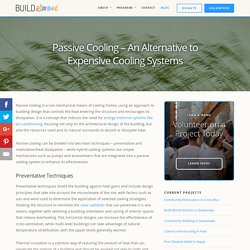 It is a concept that reduces the need for energy-intensive systems like air-conditioning, focusing not only on the architectural design of the building, but also the resources used and its natural surrounds to absorb or dissipate heat. Passive cooling can be divided into two main techniques – preventative and modulation/heat dissipation – while hybrid cooling systems use simple mechanisms such as pumps and economisers that are integrated into a passive cooling system to enhance its effectiveness.

Raising awareness of the negative impacts of industrial biofuels and bioenergy. Why The Government Is Paying Homeowners To Go Solar. Cedric Yarish, The Eco Experts Last updated on 15th January 2018 Between falling up-front costs and huge savings on bills, it's a great time to switch to solar panels. 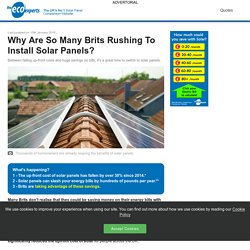 Thousands of homeowners are already reaping the benefits of solar panels. GE Activates Cypress, the Experimental Next-Gen Wind Turbine. The end of oil? First osmosis power plant goes on stream in Norway. How Solar Windows Could Put Transparent Panels Everywhere. Elon Musk’s giant battery is now delivering power to South Australia. The world's largest lithium-ion battery is now live in South Australia after being delivered a few weeks ago, easily beating the promise Elon Musk made of "100 days or it's free. 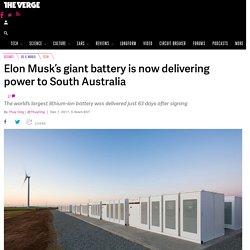 " How the legacy of dirty coal could create a clean energy future. Energy from coal is now being linked to global warming and pollution on a global level. 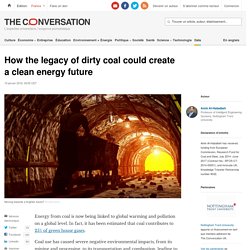 In fact, it has been estimated that coal contributes to 25% of green house gases. Coal use has caused severe negative environmental impacts, from its mining and processing, to its transportation and combustion, leading to high levels of pollution. In October 2017, a United Nations weather agency report indicated that levels of carbon dioxide surged at “record-breaking speed” compared to 2016.

SolePower. How Solar Windows Could Put Transparent Panels Everywhere. As we move away from fossil fuels like coal and gas as sources of energy, one of the better ways to produce power is by harvesting light from the sun. 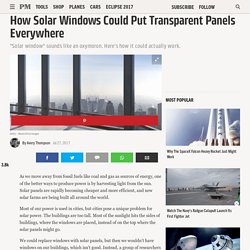 Solar panels are rapidly becoming cheaper and more efficient, and new solar farms are being built all around the world. MIT Achieves Breakthrough in Nuclear Fusion - Helium-3 Nuclear Fusion Increases Ion Energy. Bob Mumgaard/Plasma Science and Fusion Center Researchers operating fusion reactor experiments at MIT, along with partnered scientists in Brussels and the U.K., have developed a new type of nuclear fusion fuel that produces ten times as much energy from energized ions as previously achieved. 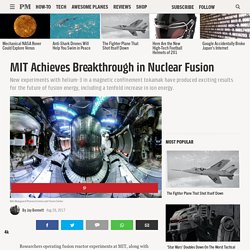 The experiments with the new fusion fuel, which contains three types of ions—particles with an electric charge due to the loss or gain of an electron—were conducted in MIT's Alcator C-Mod tokamak, a magnetic confinement reactor that holds the records for highest magnetic field strength and highest plasma pressure in a fusion experiment. Advertisement - Continue Reading Below. NASA's Next Great X-Plane Will Try to Revolutionize Electric Flight. The Long Road to the X-57 Maxwell The X-57 Maxwell program incorporates a number of prototypes. In fact, the first test of the X-57, known as Mod I, wasn't an airplane at all—it was a semi truck. To test the high-lift motors that will be used on takeoff and landing, NASA drove a semi with a mounted test wing along Rogers Dry Lake, the famous aircraft landing site at Edwards Air Force Base in the Mojave Desert of Southern California.

The experimental wing had 18 small electric motors designed to accelerate air over the wing and produce extra lift as the truck drove down the hard-packed dirt runway. Home - Kitemill. It's So Windy in Britain That the Price of Electricity Went Negative. One of the biggest concerns with renewable energy is what to do when the wind stops blowing or the sun stops shining. But sometimes you can have the opposite problem, like last week in the U.K. when the wind blew so hard electricity prices went negative. Advertisement - Continue Reading Below For several hours at night on June 7, electricity prices in Britain hit rock bottom, making this the longest prices have been negative in U.K. history. Back in March, electricity prices went negative twice in one day, the first that's ever happened. The U.K. isn't alone, either. As renewable energy becomes more prevalent, countries are going to have to figure out ways to store that energy for long periods of time.

China Is Now Home To The World's Largest Floating Solar Power Plant. While the US continues to shirk its carbon-cutting responsibilities, China continues to showcase to the world why it is set to become the de facto leader on climate change advocacy. Its coal use is finally flatlining, it’s investing heavily in both nuclear and wind power, and now it’s now home to the world’s largest floating solar farm. Sungrow Power Supply announced this month that they have finished construction on a 40-megawatt solar power plant, which is sitting on a somewhat appropriate setting. Land Art Generator Initiative. The dawn of of the solar power station. Engineers are working to bring large-scale solar power to the forefront of the energy sector. Spanish Solar Energy. Germany Just Smashed an Energy Record, Generating 85% Electricity From Renewables.

A Greener Germany In this age of rampant global warming, the term “record-breaking” has started to sound a bit like…well…a broken record. 2016 delivered month after month of record-breaking temperatures, and the year as a whole was the latest in a series of record-breaking years. We’ve recently shattered records for rising sea levels, elevated ocean temperature, and carbon dioxide levels, and many of these trends continue to move in the wrong direction. Thankfully, we also have some positive climate-related achievements to celebrate, the latest of which is courtesy of Germany, which just set a new national record for renewable energy.

Most of the strategies we hear about when it comes to reducing greenhouse gas emissions involve figuring out ways to pump less carbon into the air, whether by shifting our reliance on coal-based electricity to clean energy sources, driving electric or hydrogen fuel cell cars, or lessening our impact on the atmosphere through cleaner agricultural processes. Extreme Energy Action Network. Climate Change, Ecology and Renewable Energy. BBC Radio 4 - FutureProofing, Energy. Portugal just ran for 4 straight days entirely on renewable energy. As renewable energy matures into an ever more popular and cost-effective source of electricity, we're getting used to seeing some historic achievements from nations that have ramped up their clean energy infrastructure – and the latest glory goes to Portugal.

Recent figures show that the country ran on renewable energy alone for four days straight this month, completing an extraordinary 107-hour run between Saturday morning, May 7, and early Wednesday evening, May 11. During this record-setting window, Portugal ran on solar, wind, and hydro electricity entirely, without needing to fall back on power sourced from its coal and natural gas plants. The numbers, released by Portugal's ZERO System Sustainable Land Association in collaboration with the Portuguese Renewable Energy Association (APREN), indicate that the nation has come a long way in terms of embracing clean energy in recent decades, and could stand to even improve its environmental credentials in the near future. This plant will charge your phone. Altaeros Energies. Home - Renewable World.