No Fear Literature: The Canterbury Tales: Prologue to the Wife of Bath’s Tale. The Middle Ages Interactive - Annenberg Learner. The Black Death, 1348. 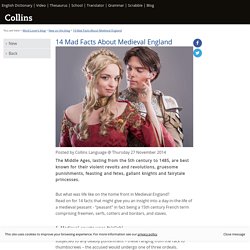 But what was life like on the home front in Medieval England? Read on for 14 facts that might give you an insight into a day-in-the-life of a medieval peasant - “peasant” in fact being a 15th century French term comprising freemen, serfs, cotters and bordars, and slaves. 1. Medieval courts were fair(ish)Law and order was harsh in Medieval England, however before being subjected to any deadly punishment – these ranging from the rack to thumbscrews – the accused would undergo one of three ordeals. These included the ‘ordeal by fire’ whereby an accused person held a red-hot iron bar and walked three paces; if the accused’s hand healed after three days then they were innocent, if not, they were guilty. 2. 3. 4. 5. 6. 7. 8. 9. 10. 11. 12. 13. Life in the Middle Ages facts: the medieval Renaissance, travel, marriage, customs and social hierarchy. 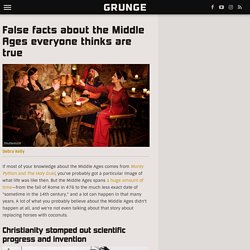 It's such a powerful idea that it even gave rise to the era's other name, the Dark Ages (they weren't called that because there was no such thing as electricity yet). But it's absolutely untrue. Let's start with the Church. Instead of stepping on forward thinkers, the medieval Church established a curriculum for university students that included science and math. 14 Crazy Things That People of the Middle Ages Seriously Believed. We at Bright Side have found some statements that may seem like something no one would ever believe in. 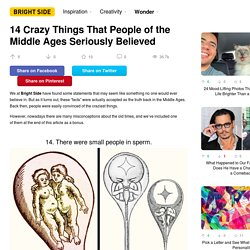 But as it turns out, these “facts” were actually accepted as the truth back in the Middle Ages. Back then, people were easily convinced of the craziest things. However, nowadays there are many misconceptions about the old times, and we’ve included one of them at the end of this article as a bonus. 14. There were small people in sperm. Yes, in the 17th and 18th centuries, scientists really thought this way! It was only later that people appeared to challenge this opinion. 13. MEDIEVALGAMES. The General Prologue - Translation. Your Complete Guide To Creating A Dinner Party Seating Chat. Never underestimate the importance of a well thought-out seating chart when planning a dinner party. 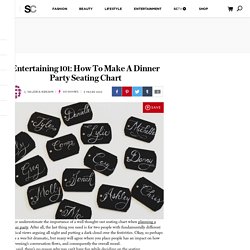 After all, the last thing you need is for two people with fundamentally different political views arguing all night and putting a dark cloud over the festivities. Okay, so perhaps that’s a wee bit dramatic, but many will agree where you place people has an impact on how the evening’s conversation flows, and consequently the overall mood. That said, there’s no reason why you can’t have fun while deciding on the seating arrangements. And to help ensure the process is anything but painful, we’ve compiled a step-by-step guide to assist you in your your planning.

Happy hosting! 3. Seating at an Official Luncheon or Dinner - The Emily Post Institute, Inc. When entertaining dignitaries, such as government or military officials and foreign diplomats, the host or hostess of an official luncheon or dinner seats the guests according to rank. 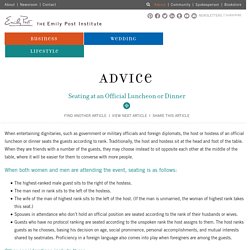 Traditionally, the host and hostess sit at the head and foot of the table. When they are friends with a number of the guests, they may choose instead to sit opposite each other at the middle of the table, where it will be easier for them to converse with more people. When both women and men are attending the event, seating is as follows: Wedding Seating, Wedding Seating Charts - WeddingWire.com. The Canterbury Tales - Episode 2. The Canterbury Tales: General Prologue & Frame Story Characters. The technology of the 1950s. (Bob Urban, who usually writes this column, is out buying his wife a Valentine. 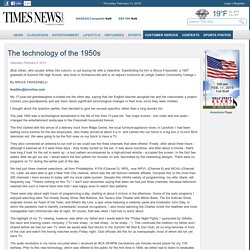 Substituting for him is Bruce Frassinelli, a 1957 graduate of Summit Hill High School, who lives in Schnecksville and is an adjunct instructor at Lehigh Carbon Community College.) By BRUCE FRASSINELLI tneditor@tnonline.com My 17-year-old granddaughter e-mailed me the other day, saying that her English teacher assigned her and her classmates a project: Contact your grandparents and ask them about significant technological changes in their lives since they were children. I thought about the question awhile, then decided to give her several specifics rather than a long laundry list. THE 50'S FAMILY AND TODAY'S. BALTIMORE— Are we returning to the 1950's-style family? 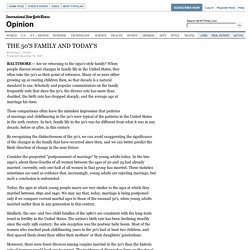 When people discuss recent changes in family life in the United States, they often take the 50's as their point of reference. Many of us were either growing up or rearing children then, so that decade is a natural standard to use. The Canterbury Tales (2003) 05 - The Pardoner's Tale. The Knight in The Canterbury Tales: General Prologue & Frame Story.

Character Analysis Look up in the sky! 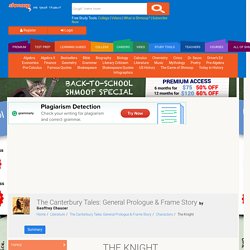 It's a bird…it's a plane…it's SUPER KNIGHT! Seriously, this guy is one perfect knight. If there's been a battle in the past twenty years, chances are good he was there. In all of Christendom and Heathendom, there's no man who's ridden farther. But not only is the Knight a stellar battlefield athlete, he's also a genuinely nice guy. Unlike with some of the other characters, we can be sure that this knight is exactly what Chaucer says he is. From "The Canterbury Tales": General Prologue (modern english and middle english) CDC reports 11 cases of human plague since April. The average number of cases between 2001 and 2012 was seven, with less than one death each year. 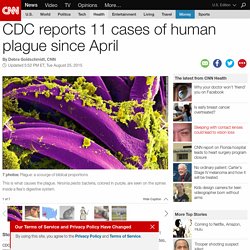