World's Columbian Exposition: Reactions to the Fair. I am puzzled to understand the final impression left on the average mind...as to the inward meaning of this dream of beauty. 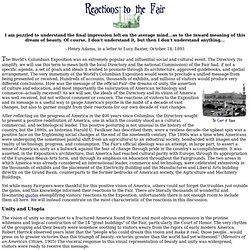 Of course, I don't understand it, but then I don't understand anything... --Henry Adams, in a letter to Lucy Baxter, October 18, 1893 The World's Columbian Exposition was an extremely popular and influential social and cultural event. The Directory (to simplify, we will use this term to mean both the local Directory and the national Commission) of the Fair had, if not a specific agenda, a set of goals and ideals it wished to promote through its architecture, approved guidebooks, and spatial arrangement. The very immensity of the World's Columbian Exposition would seem to preclude a unified message from being presented or received. Naked Ladies: Belly Dancers of Ancient Egypt. Femaledanceancientegypt. Kharmine tells of Sol Bloom for the Gilded Serpent.

Gilded Serpent presents...Seeking Sol Bloom By Kharmine When his name comes up it’s usually in a dismissive manner, something like – Sol Bloom the American promoter, who hyped traditional Oriental dancing by coining the term “belly dancing” to titillate the audience at the 1893 World’s Columbian Exposition in Chicago and make big bucks for himself. 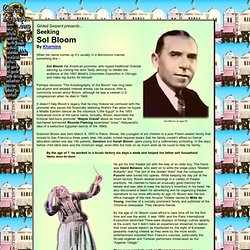 Perhaps because “The Autobiography of Sol Bloom” has long been out-of-print and detailed Internet entries can be elusive, little is commonly known about Bloom, although he was a veteran U.S. congressman when he died in 1949. It doesn’t help Bloom’s legacy that he may forever be confused with the promoter who saved the financially teetering World’s Fair when he hyped a Middle Eastern dancer as the notorious “Little Egypt” in the 1953 Hollywood movie of the same name. Solomon Bloom was born March 9, 1870 in Pekin, Illinois, the youngest of six children in a poor Polish-Jewish family that moved to San Francisco three years later. Bloom balked. Fall Issue #16 - Born to Dance. 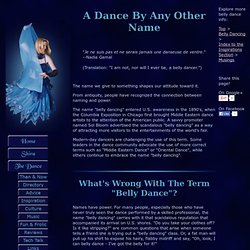 " --Nadia Gamal(Translation: "I am not, nor will I ever be, a belly dancer. ") The name we give to something shapes our attitude toward it. From antiquity, people have recognized the connection between naming and power. Links to Interesting and Informative Web Sites About Belly Dancing. Table of Contents Active Sites Why do I like these sites so much? 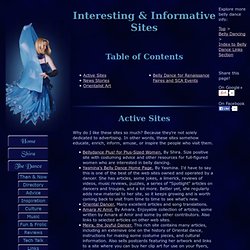 Because they're not solely dedicated to advertising. In other words, these sites somehow educate, enrich, inform, amuse, or inspire the people who visit them. Bellydance Plus! Sonya's Souk - Belly Dance - Fellow Artists. Belly Dance Shopping. 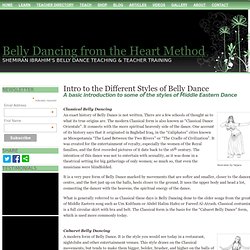 There are a few schools of thought as to what its true origins are. The modern Classical form is also known as “Classical Dance Orientale”. It connects with the more spiritual heavenly side of the dance. One account of its history says that it originated in Baghdad Iraq, in the “Caliphates” cities known as Mesopotamia “The Land Between the Two Rivers” or “The Cradle of Civilization”.

It is a very pure form of Belly Dance marked by movements that are softer and smaller, closer to the dancer’s centre, and the feet just up on the balls, heels closer to the ground. What is generally referred to as Classical these days is Belly Dancing done to the older songs from the greats of Middle Eastern song such as Um Kulthum or Abdel Halim Hafez or Fareed Al-Atrash.

Styles and other names for belly dance. The Belly Dance is identified by swaying hips, undulating torso, and articulated isolations employed in a range of dynamic and emotional expressions. 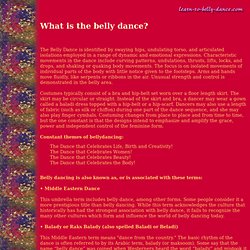 Characteristic movements in the dance include curving patterns, undulations, thrusts, lifts, locks, and drops, and shaking or quaking body movements. The focus is on isolated movements of individual parts of the body with little notice given to the footsteps. Arms and hands move fluidly, like serpents or ribbons in the air. Unusual strength and control is demonstrated in the belly area. Costumes typically consist of a bra and hip-belt set worn over a floor length skirt.

Many Styles of Belly Dance. Tribal Bellydance dot org! Rachel Brice. She has performed and toured nationally and internationally since 2002. 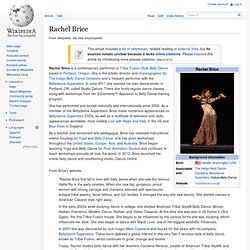 As a member of the Bellydance Superstars, Brice made numerous appearances on Bellydance Superstars DVDs, as well as a multitude of television and radio appearances worldwide, most notably Live with Regis and Kelly in the US and Blue Peter in England. As a teacher and movement arts pedagogue, Brice has released instructional videos focusing on Yoga and Belly Dance, and has given workshops throughout the United States, Europe, Asia, and Australia. Bellydance Superstars. Bellydance Superstars is a professional American bellydance troupe formed in 2002 by producer and manager Miles Copeland.[1] In its first six years of touring, it presented 700 shows in 22 countries. 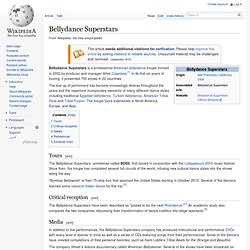 Tours[edit] The Bellydance Superstars, sometimes called BDSS, first toured in conjunction with the Lollapalooza 2003 music festival. Since then, the troupe has completed several full circuits of the world, infusing new cultural dance styles into the shows along the way. "Bombay Bellywood" is their 75-stop tour that spanned the United States starting in October 2010. Several of the dancers learned some classical Indian dance for this trip.[2] Critical reception[edit] The Bellydance Superstars have been described as "poised to be the next Riverdance Media[edit] In addition to live performances, the Bellydance Superstars company has produced instructional and performance DVDs with every level of learner in mind as well as a series of CDs featuring songs from their performances.

Belly Dance Boulevard - Belly Dance Boulevard. 2010 Belly Dance News From Cairo Egypt, Glen Ellyn Illinois, and the World. In 2010 the Western press seemed to have lost interest in Middle Eastern folk dance, moving on to other more tawdry forms of expression that did not demand the respect insisted upon by belly dancers. 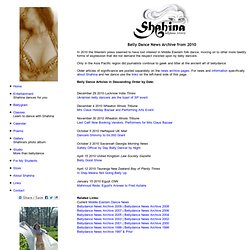 Only in the Asia Pacific region did journalists continue to gawk and titter at the ancient art of bellydance. Older articles of significance are posted separately on the news archive pages. For news and information specifically about Shahina and her dance use the links on the left-hand side of this page. Belly dance. Belly dance or bellydance is a Western-coined name for "solo, improvised dances based on torso articulation"[1] originating from the Middle East, especially raqs sharqi (Arabic: رقص شرقي‎). 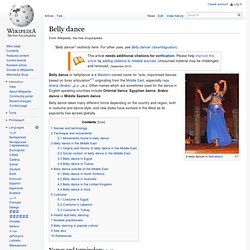 Other names which are sometimes used for the dance in English speaking countries include Oriental dance, Egyptian dance, Arabic dance or Middle Eastern dance. Belly dance takes many different forms depending on the country and region, both in costume and dance style, and new styles have evolved in the West as its popularity has spread globally. Names and terminology[edit] Tribal Fusion. Rachel Brice 3 DSC 0115 History[edit] Tribal Fusion Dance is an offshoot of the American Tribal Style Belly Dance movement, which began in the early 90's by Carolena Nericcio, the director of Fat Chance Belly Dance. The first Tribal Fusion dance company (although there was no name for it at the time, they simply called it Belly Dance Theatre) was Jill Parker's Ultra Gypsy. (June, 2010;[1] Stants, 2008;[2][3][4]) Jill Parker is often referred to as the "mama of Tribal Fusion".

Tribal is generally performed in a group, often at community events such as festivals and parades, with tribal dancers typically favoring a look provided by wide-legged pants gathered at the ankles (aka pantaloons), tops known as cholis and full skirts.[2] Tribal style[edit] Belly Dancing sensual or sexual? [mmpwr writes] >Though I have always seen it promoted as an art form in this country, >according to my acquaintances from various middle-eastern countries, >in its native lands belly dance is the eastern equivalent of strip-tease. Your acquaintances are incorrect. The dance was originally performed with many layers of colorful clothing, belted at the waist. No skin showed. The dancers bounced layers of skirts by tilting their pelvises violently. Egyptian Foreign Belly Dancer Ban Controversy. In step means not going belly up. Belly Dancing: "Isn't That Like Stripping?" (Why They Ask)

It was the 1890's. Respectable women wore corsets and long, flowing skirts that covered their shapely ankles. Queen Victoria reigned in England. Women in the U.S. did not yet have the right to vote. People put lacy covers over their table legs to avoid any hint of indecent behavior by their furniture. The U.S. U.S. attitudes toward people in show business were very, very different then, compared with what they are today.

Vaudeville was a raucous form of entertainment that "common people" enjoyed, but "decent people" condemned. In this environment, an event known as the Chicago World's Columbian Exposition made its debut in 1893 to celebrate the 400th anniversary of Christopher Columbus' discovery of the New World. The Required Qualities of Dancers (ancient Syrian document from 10th century CE) This translation was done by Dr. George Sawa and presented at the International Bellydance Conference of Canada in April 2008. Dr. George Sawa was born in Alexandria, Egypt in 1947, where he completed his undergraduate studies in Western music and Classical Arabic music. Belly Dance.