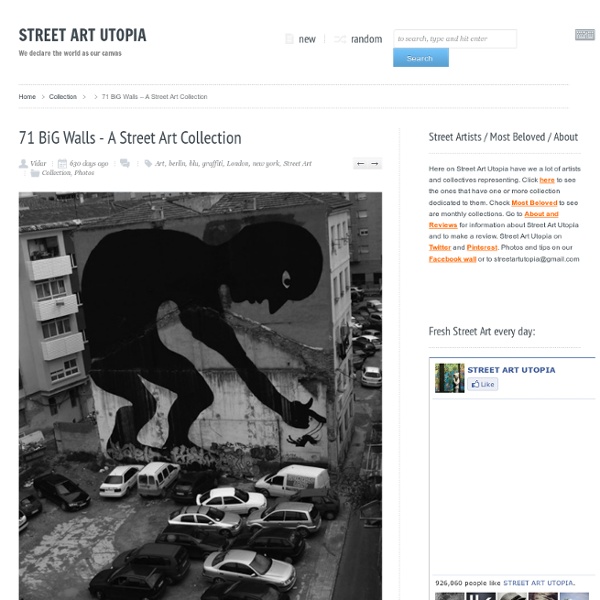 The Freedom Tunnel - New York, NY : citynoise.org New York, NY - Peter - Monday, June 9th, 2008 : goo [previous] :: [next] This is the north entrance to the Freedom Tunnel , on the west side of Manhattan in Harlem. I could go on and on describing this place, its contents and meaning, but I'll let the photos speak for themselves. 100 of the Best Street Art Made in 2012 – Part 1 Streets are the places where the art was born. For that Here are first 50 of 100 amazing street art pictures. Enjoy!!! Source ★ Origamic Architecture Instructions & Free Kirigami Templates ★ Architectural origami is the art of paper cutting to create 3D buildings – from just one sheet of paper! The designs range from the simple to the exceptionally intricate, and the subject matter can be anything from a whole city to a famous landmark or even your own house. This page will focus on 90° pop-up buildings and detailed shapes, where the 3D design emerges and is fully visible when the paper is folded to an angle of 90 degrees. That means that this technique is well suited to making impressive pop-up cards as well – although you won’t be mass producing these for all your colleagues at Christmas (unless you start in January!) Below you will find inspirational examples of origami artist’s work, advice for creating your own artwork, plus free online downloads. After saving the free templates to your computer, print them out and cut and fold along the lines.

100 Best Photoshop Tutorials of All Time that Yield Professional Results Photoshop tutorials are one of the most popular subjects on the web, as the digital art community continues to grow and new designers bring their unique skills. However, quality Photoshop tutorials that teach you a useful effect, have a quality finished result and are well explained are harder to find, and with the large number of tutorial sites available, it can be hard to sort the quality from the mundane. In this massive roundup, we’ve collected the top 100 best Photoshop tutorials that have ever been created, that yield professional results, teach you a useful effect, are well explained, and will have you designing like a pro in no time.

Carlos Meira's paper sculptures Born in Rio de Janeiro, Carlos Meira’s artistic endeavour began when he joined the printmaking course at the School of Fine Arts at Federal University of Rio de Janeiro. In early 1990, Carlos moved to Portugal where he developed his unique style of paper sculpture. He returned to Brazil in 1996 and settled in Florianopolis where he further strengthened his illustration side. He has held six solo exhibitions and illustrated several books since then. Carlos Meira has now devoted himself to illustration and paper sculpture having worked as an artist, designer and art director within the advertising industry. He also runs his blog where you can catch-up on his latest work.

Society6 Artists Art Prints Popular All « PrevNext » We declare the world as our canvas106 of the most beloved Street Art Photos - Year 2012 Click on a photo and you make it bigger and can post a comment on it. And thats some of the most beloved Street Art Photos posted in 2012 on Street Art Utopia! A member of Street Art Utopia on Facebook wrote two year ago this nice piece about the future: – My son, do you want to hear something strange? – Yes! What? 14 Useful Sites on Paper Folding Instructions and Origami Tutorials Origami is the art of paper folding which originated in Japan in the 17th century. It is now very popular even outside Japan. The term comes from the Japanese word ori meaning “folding” and gami (kami) meaning “paper.” There is a rich connection between origami and mathematics (read Origamics: Mathematical Explorations Through Paper Folding ). Learning the art could be fun and rewarding at the same time.

StoryCorps 9/11 Stories StoryCorps has released a set of animated short films telling the stories of people whose loved ones died during the 9/11 terrorist attacks in 2001. StoryCorps is an independent nonprofit whose mission is to provide Americans of all backgrounds and beliefs with the opportunity to record, share, and preserve the stories of our lives. Since 2003, over 50,000 everyday people have interviewed family and friends through StoryCorps. Each conversation is recorded on a free CD to share, and is preserved at the American Folklife Center at the Library of Congress.

Street art in Poland Art & Design Usually artists work alone, but sometimes a collaboration works out well. A good example is the street artists Chazme, Lump and Sepe. They worked together to make the streets of Poland look better. Share