Matariki. You might ask, "Where's the science in Matariki? 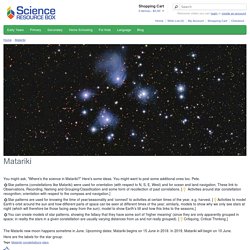 " Here's some ideas. You might want to post some additional ones too. Pete. ✡️Star patterns (constellations like Matariki) were used for orientation (with respect to N, S, E, West) and for ocean and land navigation. These link to Observations, Recording, Naming and Grouping/Classification and some form of recollection of past correlations. AM Learn. Matariki The Seasons Level 1 3. Ko te whānau o Matariki: Matariki Education Resource 2015 – Part 3. What is Matariki? - A puppet pal animation. Matariki celebration - Ara. (8) Matariki book video series: 'The Little Kiwi's Matariki' 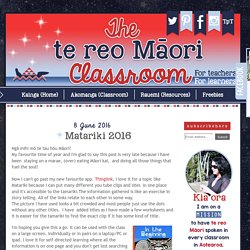 My favourite time of year and I'm glad to say this post is very late because I have been staying on a marae, (over) eating Māori kai, and doing all those things that fuel the soul! Now I can't go past my new favourite app. Thinglink, I love it for a topic like Matariki because I can put many different you tube clips and sites in one place and it's accessible to the tamariki.The information gathered is like an exercise in story telling. All of the links relate to each other in some way.The picture I have used looks a bit crowded and most people just use the dots without any other titles. I have added titles as I have made a few worksheets and it is easier for the tamariki to find the exact clip if it has some kind of title. I'm hoping you give this a go. It is also a great way for the tamariki to work together tagging an appropriate picture with found information to support their learning.When I begin the Matariki topic I always read the Rangi and Papa story.

Ko te whanau o Matariki: Matariki Education Resource 2015. During the coldest time each year the Matariki star cluster comes rising up for the first time in the eastern sky. 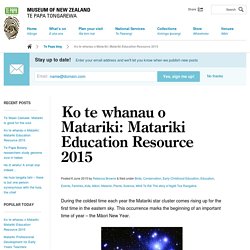 This occurrence marks the beginning of an important time of year – the Māori New Year. This is a time for coming together with whānau (family) to think about the past year, plan for the future, and to take action. In doing this, we come to understand how each member of our whānau plays their own special part. Sharing in, and appreciating the wisdom and skills of our family members (especially our elders) can help us to shape what we do for and in the world.

The Story of Mataariki. Matariki. The Seven Stars of Matariki - Retold by The Roopu Whanau RSS. Constellations in the night sky. Seven Stars of Matariki. Matariki Myth: Tamarereti.mov. Matariki - © waiata with lyrics by Te Whiuwhiu o te hau 2011™ Matariki. Image: The Pleiades (Messier 45) revisited by Fred Locklear on Flickr We have selected these resources to support you when you need information relating toMatariki, the Māori celebration of New Year, the Seven Sisters, Pleiades, constellations, and Māori gardening. 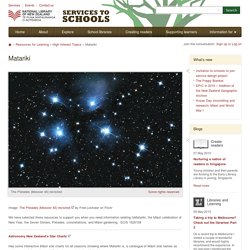 Matariki / Themes gallery / Themes. Matariki ENG 2014.pdf. Cycles of life and death - Matariki – Māori New Year. Traditionally, Māori were keen observers of the night sky, determining from the stars the time and seasons, and using them to navigate the oceans. 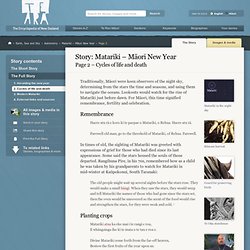 Lookouts would watch for the rise of Matariki just before dawn. For Māori, this time signified remembrance, fertility and celebration. Remembrance. Matariki. The Matariki Collection - Collection. “When old and young come together to do this, it shows the strength of their convictions.” 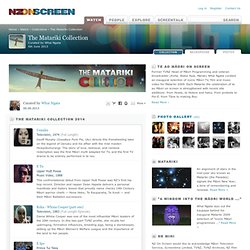 This film is a chronicle of a key moment in the Māori renaissance: the 1975 land march led by then 79-year-old Whina Cooper. Includes interviews with marchers and stirring evidence of Cooper’s oratory skills. “The big ALL FUN show for the whole family to enjoy!” Was the tagline for this classic musical comedy feature. There’s a romantic plot, but this is only an excuse for a melange of madcap, pep-filled 60s musical fun. This episode of the controversial 70s series about Governor George Grey sees war looming in the Waikato as Māori tribes band together.

In 2007 Corporal Willie Apiata, of the NZ Army's elite, secretive SAS unit, was awarded the Victoria Cross for carrying a wounded soldier to safety while under fire in Afghanistan.

Tales from the mythologies of Creation, Maui and Aoraki. Matariki Festival (Sherman & Zac) Matariki - an overview of a unit of work. I did not know that Matariki existed, except in the sense that it is one word for stars, until 2006 when a colleague had his kids colouring in pictures of stars because it was Matariki.Fast forward a couple of years to 2009, and a couple of mates decided it was a good idea to get out of bed far too early on a frosty morning to go and take photos of Matariki rising over the horizon on Buffalo Beach in Whitianga. 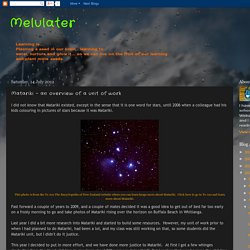 Last year I did a bit more research into Matariki and started to build some resources. However, my unit of work prior to when I had planned to do Matariki, had been a lot, and my class was still working on that, so some students did the Matariki unit, but I didn't do it justice. This year I decided to put in more effort, and we have done more justice to Matariki. At first I got a few whinges (including from the Maori children in my class) about "Why are we doing this? 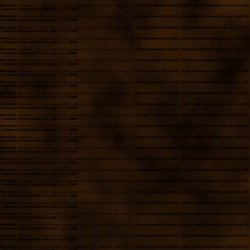 Tane's role as the creator of the night skies is told in a number of stories. Tane is said to have visited his brother Tangotango to congratulate him on the brilliance of his children - the sun, moon and stars. Tane next asked for and recieved the stars, and a dim light soon spread from Ranginui and filled our world. Www.akopanuku.tki.org.nz/assets/Special-Topics-Resources/STAR-LAB-Matariki.pdf. Heralding the new year – Matariki – Māori New Year. The heavens Matariki is the Māori name for the small cluster of stars also known as the Pleiades or the Seven Sisters, in the Taurus constellation. 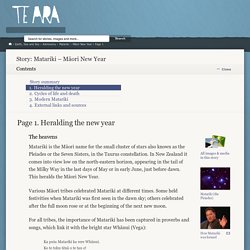