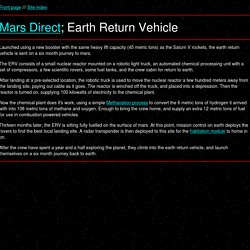 The ERV consists of a small nuclear reactor mounted on a robotic light truck, an automated chemical processing unit with a set of compressors, a few scientific rovers, some fuel tanks, and the crew cabin for return to earth. After landing at a pre-selected location, the robotic truck is used to move the nuclear reactor a few hundred meters away from the landing site, paying out cable as it goes. The reactor is winched off the truck, and placed into a depression. Now the chemical plant does it's work, using a simple Methanation process to convert the 6 metric tons of hydrogen it arrived with into 108 metric tons of methane and oxygen. Thirteen months later, the ERV is sitting fully fuelled on the surface of mars. Mars Transit Vehicle - The Technology. The Mars Transit Vehicle is a compact space station that will carry the astronauts from Earth orbit to Mars. 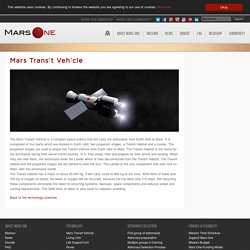 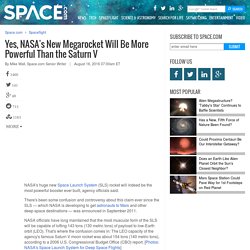 There's been some confusion and controversy about this claim ever since the SLS — which NASA is developing to get astronauts to Mars and other deep-space destinations — was announced in September 2011. NASA officials have long maintained that the most muscular form of the SLS will be capable of lofting 143 tons (130 metric tons) of payload to low-Earth orbit (LEO).

That's where the confusion comes in: The LEO capacity of the agency's famous Saturn V moon rocket was about 154 tons (140 metric tons), according to a 2006 U.S. Congressional Budget Office (CBO) report. [Photos: NASA's Space Launch System for Deep Space Flights] But arguments for the Saturn V's supremacy are based on a flawed, apples-to-oranges comparison, said Kimberly Robinson, manager of strategic communications for SLS at NASA's Marshall Space Flight Center in Huntsville, Alabama. Countdown to Mars: Space Launch System (SLS) Raptor (rocket engine family) - Wikipedia. This article is about the several spacecraft engines for the Mars launch vehicle. 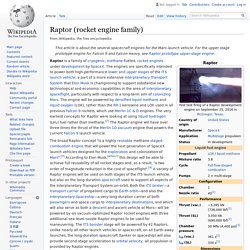 For the upper stage prototype engine for Falcon 9 and Falcon Heavy, see Raptor prototype upper-stage engine. Potential sources and sinks of methane (CH4) on Mars. Raptor ER40 Raptor ER50 Raptor ER200 Raptor development engine Raptor engine[which?] Full-flow staged combustion rocket cycle Testing of the Raptor's oxygen preburner at Stennis in 2015 As of September 2016, the Raptor engine is slated to be used in, broadly, three spaceflight vehicles, which although capable of independent flight, also make up the two launch stages of an ITS launch vehicle stack. 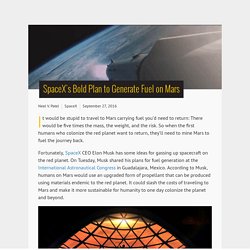