How we teach is changing. What’s that mean for what we teach? – Speaking of Geoscience. By Don Haas, Ph.D. 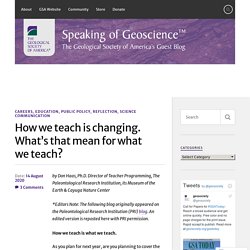 Director of Teacher Programming, The Paleontological Research Institution, its Museum of the Earth & Cayuga Nature Center*Editors Note: The following blog originally appeared on the Paleontological Research Institution (PRI) blog. An edited version is reposted here with PRI permission. How we teach is what we teach. As you plan for next year, are you planning to cover the same content as you did in the Before Times?

What is the Earth system? There are many interacting systems that make up the Earth, many of which are dynamic. These notes discuss the importance of understanding the concept of systems with emphasis on the water cycle, and are aimed specifically for teachers. What is the Earth system? Scientists increasingly view Earth as a dynamic system – a combination of interrelated, interdependent or interacting parts forming a collective whole or entity.

Weather and atmosphere on Earth

Water/Water cycle. Volcanoes and Earthquakes. Bringing the Universe to America's Classrooms. Bringing the Universe to America's Classrooms. Caves & speleology. Oceans. Seasons. Tsunami (STEAM lesson) Clouds. Auckland wetlands. Why is the sky blue? - Mystery Science. NEW ZEALAND 4K. NEW ZEALAND 4K. (8) Day and Night. Sir Peter Blake Trust. Throw us a question about our voyage & research, and our explorer on duty will answer it as soon as they are in range. 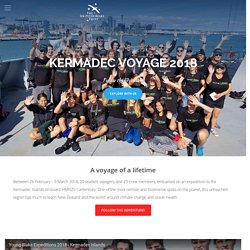 Q: Hi What kind of research/ experiments are you conducting on this voyage? Thanks - Heather, Muriwai A: Hello Heather! I’m Jackie, one of the student voyagers from Whanganui and I hope I can provide something of an overview as to what we’ve been up to. I personally have been involved in the plankton tows, where a very fine mesh net (0.1mm gaps) is dragged through the water from a depth of roughly 20m.

Q: What are you most looking forward to on this voyage? A: Being immersed in a completely new environment that is relatively untouched by the impacts of humans. A: I'm most excited to see what an island would look like in its most pristine condition, as if man had never touched it and to be a part of the great Sir Peter Blake's legacy - Jorim-Paul Phillips. Curious Kids: What makes the Earth spin on its axis every day?

This is an article from Curious Kids, a series for children. 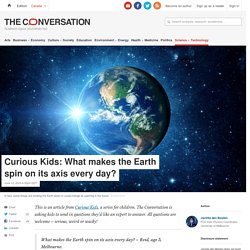 The Conversation is asking kids to send in questions they’d like an expert to answer. All questions are welcome – serious, weird or wacky! What makes the Earth spin on its axis every day? – Reid, age 5, Melbourne. To answer this tricky question, we have to look back in time to when the Earth was born, 4.5 billion years ago. When our solar system formed out of a gas cloud, called a nebula, there was lots of dust and gas coming together due to the force of gravity. (8) Real World: Earth Systems. I Am The Earth - a song for children about the Earth and Environment. NOAA SciJinks. 129 Hurricane Simulation Explore the relationship between sea surface temperatures and... hurricane strength 128 Grow Snow Crystals See how temperature affects the shape of snowflakes. 125 Whirlwind Disaster Save the words from the swirling hurricane! 27 How does a hurricane form? And what does Category 5 mean?

130 Rescue 406 Learn about the NOAA-operated SARSAT system (Search And Rescue... Satellite Aided Tracking). How many people will you be able to rescue 135 Tornado Simulator Adjust the width and pressure difference of a tornado and watch what happens 158 Make lightning with ZAP! Play Spectrix Combine colors to reveal important information about weather.

Earth Learning Idea - Innovative, Earth-related teaching ideas. Layers of the Earth for Kids/Lithosphere for Kids/Tectonic Plates for Kids. Planet Earth is fragile. NEW ZEALAND 4K. From Above - Astronaut Photography with Don Pettit. Outer Space: "A Beautiful, Beautiful World," The Earth Song by StoryBots. LAYERED EARTH CAKE - NERDY NUMMIES. Build Earth from the Inside Out! - #sciencegoals. Could I Dig a Hole Through the Earth? Physical Science 9.2a - The Earth Moon Sun System. How Many Trees Are There? A Forest Year. Why Do We Have Leap Years? The Size Of Our World. History of the Earth in 5 1/2 minutes. Terra Incognita - The Edge and Back - FULL FLIGHT coverage. Science experiment on soil erosion. This post is also available in: Italiano Science experiment on soil erosion – This experiment, which has a tremendous visual impact due to its simplicity, it will demonstrate the relationship between precipitation, soil erosion, protection of watercourses and vegetation. 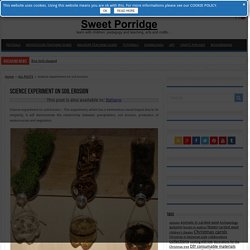 Get Shocked To See How Small Our Earth Is ? A Pale Blue Dot: The Ultimate Earth "selfie..." There is a bit more to the Pale Blue Dot that can be heard from Carl Sagan himself at this Library of Congress link. 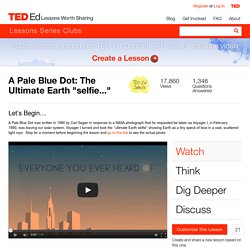 Take few moments it is worth listening to Sagan describe what he suggested to NASA as Voyager I was leaving the solar system and why he thought it was so important to take this photo. Now, read the words of his essay here. Go back to the THINK section and answer the remaining questions.There are several different versions of the Pale Blue Dot. Here is one from the Sagan Series and another from Zen Pencils. Which version do you prefer and why? Population on earth. Earth Lights.

33 Unbelievable Places To Visit Before You Die. I Can't Believe These Actually Exist On Earth... So many other-worldly places exist right on our planet, and we never even knew about it. 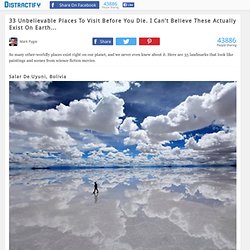 Here are 33 landmarks that look like paintings and scenes from science fiction movies. earthporm.com During the rainy season, the world’s largest salt flat becomes the world's largest mirror. The Salar was born when several prehistoric lakes joined into one. The salt flat is so reflective, it’s used to calibrate satellites. michaelyamashita.com These unqiuely tall and thin mountains are so alien that they were used in James Cameron’s “Avatar.”

Niccolobonfadini.comniccolobonfadini.com These sentinels are actually giant trees covered in snow and ice. Apod.nasa.gov natureflip.com This 240-meter-long cave system has been one of Guilin, China’s most popular attractions for over 1200 years. Amusingplanet.com all-that-is-interesting.com Ice caves are temporary structures that form at the edge of glaciers when flowing water melts a hole into glaciers. Amusingplanet.com.