Environment. Africa's new breed of solar energy entrepreneurs. African economies may be booming, but continued growth and quality of life are being jeopardised by lack of power. 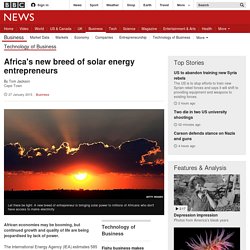 The International Energy Agency (IEA) estimates 585 million people in sub-Saharan Africa lack access to electricity, with the electrification rate as low as 14.2% in rural areas. The problem is most acute in East Africa, where only 23% of Kenyans; 10.8% of Rwandans; and 14.8% of Tanzanians have access to an electricity supply, according to the World Bank. In spite of efforts to get people onto the grid, population growth has meant these figures stay fairly steady, with the majority of people still using costly and unhealthy forms of energy for cooking and lighting.

A number of companies and organisations on the continent have identified solar power as the solution. And a new breed of "solar-preneurs" is emerging, increasing access to power and generating revenues at the same time. Modular living "In many places in sub-Saharan Africa, populations are quite dispersed. Global Forest Watch. Monitoring Forests in Near Real Time. Liberia to become 1st nation in Africa to completely stop cutting down its trees in return for development aid - Norway will pay the impoverished country $150m to stop deforestation by 2020. : worldnews. Poor Countries Tap Renewables at Twice the Pace of Rich. Emerging markets are installing renewable energy projects at almost twice the rate of developed nations, a report concluded. 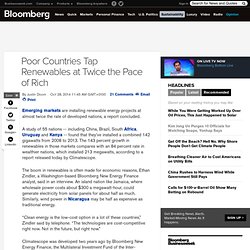 A study of 55 nations -- including China, Brazil, South Africa, Uruguay and Kenya -- found that they’ve installed a combined 142 gigawatts from 2008 to 2013. The 143 percent growth in renewables in those markets compares with an 84 percent rate in wealthier nations, which installed 213 megawatts, according to a report released today by Climatescope. The boom in renewables is often made for economic reasons, Ethan Zindler, a Washington-based Bloomberg New Energy Finance analyst, said in an interview. An island nation like Jamaica, where wholesale power costs about $300 a megawatt-hour, could generate electricity from solar panels for about half as much. Similarly, wind power in Nicaragua may be half as expensive as traditional energy.

“Clean energy is the low-cost option in a lot of these countries,” Zindler said by telephone. Press spacebar to pause and continue. Montreal Protocol. Retrospective video on the Montreal Protocol and the collaboration between policy makers, scientists, and industry leaders to regulate CFCs. 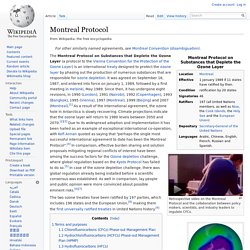 The largest Antarctic ozone hole recorded as of September 2006 The Montreal Protocol on Substances that Deplete the Ozone Layer (a protocol to the Vienna Convention for the Protection of the Ozone Layer) is an international treaty designed to protect the ozone layer by phasing out the production of numerous substances that are responsible for ozone depletion. It was agreed on September 16, 1987, and entered into force on January 1, 1989, followed by a first meeting in Helsinki, May 1989.

Since then, it has undergone eight revisions, in 1990 (London), 1991 (Nairobi), 1992 (Copenhagen), 1993 (Bangkok), 1995 (Vienna), 1997 (Montreal), 1999 (Beijing) and 2007 (Montreal).[1] As a result of the international agreement, the ozone hole in Antarctica is slowly recovering. Terms and purposes[edit] Chlorofluorocarbons (CFCs) Phase-out Management Plan[edit] Our Recovering Ozone Layer Shows Politics Can Make A Difference. By Bill Gates: Why I’m investing $1 billion of my own money into clean energy research. 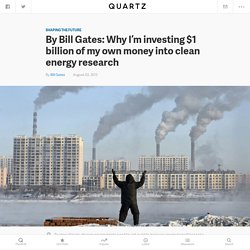 Even for those of us who grew up eating every meal over a Rand McNally world map placemat, there are a lot of terms to remember. And confuse. Often, it seems people may not be aware they are using a specific term incorrectly—hence the overwhelmingly positive reception to Terry Blas’s recent illustration explaining the difference between “Hispanic” and “Latino.” As such, Quartz has compiled this handy dictionary of commonly misused and mixed-up geographical terms. Never get caught confusing “Guyana” and “Guinea” again! Hispanic vs. “Hispanic” refers to anyone with ancestors originating in a Spanish-speaking country. England vs. England is a constituent country of the United Kingdom, homeland of the English language and seat of the Anglican Church.

Persian vs. “Persian” refers to the majority-ethnicity of Iran. Chinese vs. Mandarin is the most-spoken language in the People’s Republic of China. Arab vs. The Midwest vs.