#KISSMYASSETS Canadian tar sands. Bakken crude. Corporate shell games, acquisitions, mergers & investments. Apparent government indifference & resistance to transparency. Paid protesters, drones, social media wars & hired muscle. The Missouri River & a Tribe of Proud Sioux who've been dismissed & devalued for centuries. I'm just an uncensored white chick wading through the bullshit, in search of the truth. A truth that's been lost in misdirection, blinded by passion-fueled emotions from each of the opposing forces. This, is my research.

Its official: inequality, climate change and social polarisation are bad for you. Hero of the Poor/Flickr, CC BY-NC-SA This year’s Global Risks Report from the World Economic Forum warns that rising income inequality and societal polarisation could create further problems if urgent action isn’t taken -– and that’s after the car-crash that was 2016. 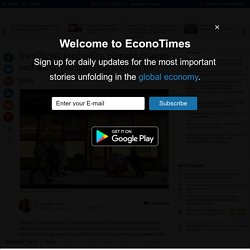 Amen to that. It is somehow appropriate that the report is published just days after the death of Tony Atkinson, the social scientist who did more than any other to point to the importance of income inequality as an issue, and to argue that action could and should be taken. We should all take note of Sir Andrew Dilnot, Warden of Nuffield College, who said Atkinson will be remembered for his “belief that things could be done to improve the world”. The new generation has its own figurehead in the battle against inequality, of course: the economist and author of Capital in the 21st Century, Thomas Piketty. Both would have recognised the observation in this year’s risk report that: Risk management Artificial intelligence. FACT: Adolf Hitler’s Mein Kampf in ‘Overwhelming’ Demand in Germany. Bill drafted in ND would allow concealed carry without permit. Fargo, N.D. 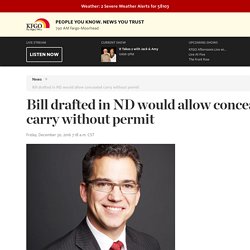 (KVRR) - A North Dakota State Representative wants you to be able to carry a loaded concealed firearm without a permit. Eleven other states have implemented what are called “constitutional carry laws” while another four have adopted limited versions of the law. In North Dakota, an open carry state, Representative Rick Becker says he doesn’t believe passing constitutional carry would make much of a difference. “This bill allows people to do the same level of carrying as a class two without going through the process and payments and all the requirements,” said Becker.

Although gun advocates might like the idea of not having to go through such a rigorous process to conceal carry, constitutional carry could pose possible issues for law enforcement. Falling short of endorsing or opposing the bill, law enforcement said part of the application process requires license holders to register with the BCI. It helps police easily identify who may have a concealed fire arm.

CIVIL RIGHTS. North Dakota Blogs. Trump Scolds House Republicans for Weakening Ethics Panel. They got a taste of what is to come Tuesday morning, just after House Republicans voted to gut an outside ethics panel in the new rules that will govern the House for the next two years. 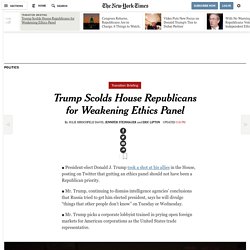 That hashtag is “drain the swamp,” by the way. He is also contradicting his senior adviser, Kellyanne Conway, who took a far more cooperative tone. Inside information on Russian hackers? What does Mr. Trump know about who hacked the presidential election, and how does he know it? Mr. He gave no clues about the kind of information he claims to have about the computer breaches, but he said last week that despite his desire to “move on” from the issue, he would have intelligence officials brief him on the attacks. Before ringing in 2017 at his exclusive resort in Palm Beach, Fla., Mr. Republicans on Capitol Hill, however, appear to have all the information they need to start a high-level examination of Russian cyberattacks, beginning this week.

Forbes Welcome. DN! This is a rush transcript. 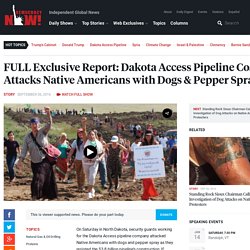 Copy may not be in its final form. AMY GOODMAN: On Saturday in South Dakota, security guards working for the—in North Dakota, security guards working for the Dakota Access pipeline company attacked Native Americans with dogs and pepper spray as they resisted the $3.8 billion pipeline’s construction. If completed, the Dakota Access pipeline would carry about 500,000 barrels of crude per day from North Dakota’s Bakken oil field to Illinois, where it would meet up with an existing pipeline that would carry the oil all the way down to Texas. The pipeline has faced months of resistance from the Standing Rock Sioux Tribe and members of nearly 100 more tribes from across the U.S. and Canada. The Standing Rock Sioux Tribe has also sued the U.S. government over the pipeline’s construction. 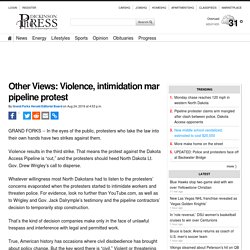 For evidence, look no further than YouTube.com, as well as to Wrigley and Gov. Jack Dalrymple’s testimony and the pipeline contractors’ decision to temporarily stop construction. That’s the kind of decision companies make only in the face of unlawful trespass and interference with legal and permitted work. True, American history has occasions where civil disobedience has brought about policy change.

But the key word there is “civil.” And protesting a lawfully permitted oil pipeline isn’t one. True, the pipeline will cross deep beneath the Missouri River upstream of the Standing Rock Sioux tribe’s water intake. In fact, it’s inarguable that the Dakota Access Pipeline will bring down the environmental impact of spilled Bakken oil, and not by a small amount. Not, however, though violence.