Brain scans predict which criminals are more likely to reoffend. Doug Menuez/Getty Activity in a particular region of the cortex could tell whether a convict is likely to get in trouble again. 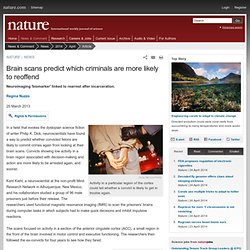 In a twist that evokes the dystopian science fiction of writer Philip K. Dick, neuroscientists have found a way to predict whether convicted felons are likely to commit crimes again from looking at their brain scans. Convicts showing low activity in a brain region associated with decision-making and action are more likely to be arrested again, and sooner. Mental picture of others can be seen using fMRI, finds new study. It is possible to tell who a person is thinking about by analyzing images of his or her brain. 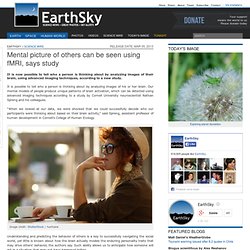 Our mental models of people produce unique patterns of brain activation, which can be detected using advanced imaging techniques according to a study by Cornell University neuroscientist Nathan Spreng and his colleagues. “When we looked at our data, we were shocked that we could successfully decode who our participants were thinking about based on their brain activity,” said Spreng, assistant professor of human development in Cornell’s College of Human Ecology. Understanding and predicting the behavior of others is a key to successfully navigating the social world, yet little is known about how the brain actually models the enduring personality traits that may drive others’ behavior, the authors say. Brain Scan Knows Who You're Thinking About. For the first time, scientists can scan a person’s brain and deduce whom a person is thinking of. 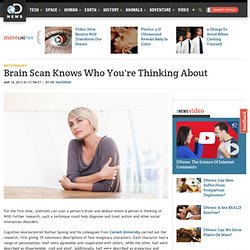 With further research, such a technique could help diagnose and treat autism and other social interaction disorders. Cognitive neuroscientist Nathan Spreng and his colleagues from Cornell University carried out the research, first giving 19 volunteers descriptions of four imaginary characters. Each character had a range of personalities: Half were agreeable and cooperated with others, while the other half were described as disagreeable, cold and aloof. Additionally, half were described as gregarious and extroverted, while others were depicted as timid introverts. Scientists also gave the characters popular names and matched them to the volunteer’s gender. First mind-reading implant gives rats telepathic power - life - 28 February 2013. Read full article Continue reading page |1|2 Video: Watch a pair of rats communicate by mind-reading The world's first brain-to-brain connection has given rats the power to communicate by thought alone. 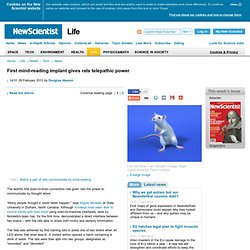 "Many people thought it could never happen," says Miguel Nicolelis at Duke University in Durham, North Carolina. Although monkeys have been able to control robots with their mind using brain-to-machine interfaces, work by Nicolelis's team has, for the first time, demonstrated a direct interface between two brains – with the rats able to share both motor and sensory information. The feat was achieved by first training rats to press one of two levers when an LED above that lever was lit.

An array of microelectrodes – each about one-hundredth the width of a human hair – was then implanted in the encoder rats' primary motor cortex, an area of the brain that processes movement. Implants linked The researchers then wired up the implants of an encoder and a decoder rat. Fluorescent protein lets us read a fish's thoughts - life - 31 January 2013. Scientists at MIT have developed a device that allows you to see through concrete walls. Amazing video shows us the actual movies that play inside our mind.

Upon rereading the entire article it does appear that the second clip shown to the subjects was fully reconstructed by what was learned from the brain in the first mapping session. 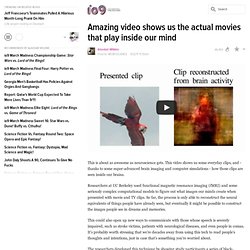 That is fucking incredible. Agreed. That's just so incredible. It's not perfect, obviously, but who cares?! They reconstructed what a person was seeing! Actually, I think it's sort of the opposite of the headline, which is completely misleading us here. DARPA combines human brains and 120-megapixel cameras to create the ultimate military threat detection system. 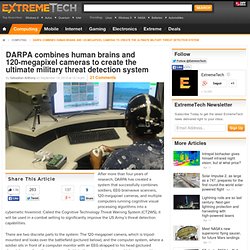 Called the Cognitive Technology Threat Warning System (CT2WS), it will be used in a combat setting to significantly improve the US Army’s threat detection capabilities. There are two discrete parts to the system: The 120-megapixel camera, which is tripod-mounted and looks over the battlefield (pictured below); and the computer system, where a soldier sits in front of a computer monitor with an EEG strapped to his head (pictured above). 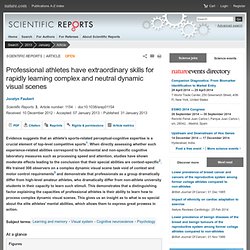 We also tested a total of 173 elite amateurs (mean age = 23,5 ± 5,8 SD, median 22) with 136 from the NCAA university sports program in the US and 37 from a European Olympic sport-training center. We have also tested 33 non-athlete university students (mean age = 23,8 ± 5,0 SD, median 22) from the Université de Montréal. We have previously reported that, given identical conditions, top professional soccer, ice hockey or rugby teams generate very similar sensitivity profiles3. For this reason the professionals are presented as a single population group. The y values are arbitrary speed units. Technological Telepathy.