Untitled. The squares of silicon are hardly thicker than sheets of paper, each about six inches by six, with narrow stripes of silver. 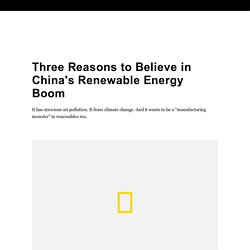 They come into the factory by the thousands, stacked in cardboard boxes, and within hours, they’ll be ready to leave again. The squares are solar cells, and in this plant two hours’ drive from Shanghai, workers in bright blue uniforms and white lab coats run the machines that assemble them, row by row, into more familiar-looking panels, ready to be installed on rooftops or in large arrays and begin turning sunlight into electricity. Chinese manufacturing has changed the economics of renewable power around the world, making solar generation cost-competitive with electricity from fossil fuels like natural gas and even coal. Mercedes-Benz Energy teams with Vivint Solar to put batteries in US homes.

Mercedes-Benz Energy has made a lot of noise about its new energy storage units for the home, but Americans keen to get their hands on a set have been left wanting since the product was unveiled last year. 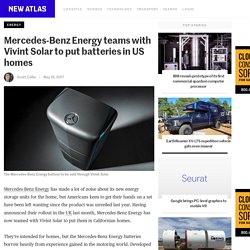 Having announced their rollout in the UK last month, Mercedes-Benz Energy has now teamed with Vivint Solar to put them in Californian homes. They're intended for homes, but the Mercedes-Benz Energy batteries borrow heavily from experience gained in the motoring world. Developed by ACCUmotive – Daimler subsidiary responsible for the lithium-ion batteries in Mercedes-Benz hybrids – the cells can be used to store energy generated by rooftop solar systems, wind turbines or any other alternative energy production sources people might have at home. The batteries will be sold through Vivint Solar initially, giving solar customers the chance to better harness and control the energy they're capturing on their roof.

"Artificial blowhole" generates electricity from ocean waves. Wind and solar power are becoming increasingly attractive alternatives to fossil fuels, but renewables are a rich tapestry, and the more threads we can weave together, the better. 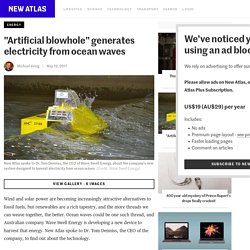 Ocean waves could be one such thread, and Australian company Wave Swell Energy is developing a new device to harvest that energy. New Atlas spoke to Dr. Tom Denniss, the CEO of the company, to find out about the technology. The Blob? First outdoor trial of genetically engineered algae conducted. Scientists have been tweaking algae in the lab for use in everything from making foam to making fuel to using it to clean up wastewater. 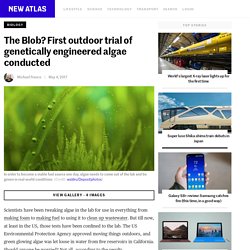 But till now, at least in the US, those tests have been confined to the lab. The US Environmental Protection Agency approved moving things outdoors, and green glowing algae was let loose in water from five reservoirs in California. Should anyone be worried? Not all, according to the results. For starters, the algae used was harmless. Atlasobscura. Plastic is pretty much forever. 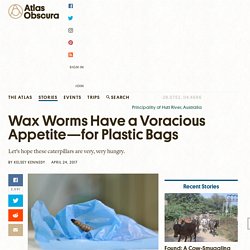 That polyethylene plastic bag you used to bring your groceries home can last for centuries in a landfill or the ocean. Scientists have tried using bacteria and fungus to break down plastics, but a team of researchers in the England and Spain have shown that a humble larva might be a much better fit for the job. It’s not just that the wax worms are particularly efficient chewers. Trashpresso Instant Recycling. Using sunlight to pull clean water from dry air. According to the latest report by the World Health Organization, nearly two billion people lack access to clean drinking water. 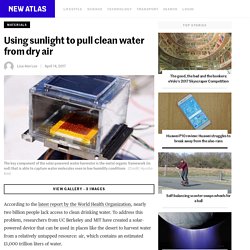 Scientists Turn Air Into Drinking Water With Device Powered Solely by Sunlight. Scientists have created a device that can pull drinking water from the air using only the power of sunlight. 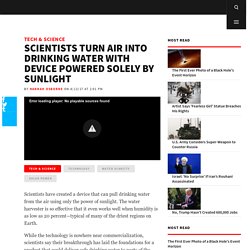 The water harvester is so effective that it even works well when humidity is as low as 20 percent—typical of many of the driest regions on Earth. While the technology is nowhere near commercialization, scientists say their breakthrough has laid the foundations for a product that could deliver safe drinking water to parts of the world where it’s scarce. That could change the lives of the 4 billion people around the globe who lack access to safe drinking warer for at least one month per year. In a study published in the journal Science, researchers led by Evelyn Wang from MIT, Massachusetts, and Omar Yaghi , from the University of California, Berkeley, have now demonstrated how their device collects moisture from the air and turns it into drinkable water. Theconversation. The Trump administration’s hostility towards climate action and research leaves a void in global climate politics. 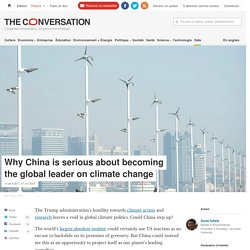 Could China step up? The world’s largest absolute emitter could certainly use US inaction as an excuse to backslide on its promises of greenery. But China could instead see this as an opportunity to project itself as our planet’s leading custodian. Evidence suggests the latter course is far more likely. Opening the annual National People’s Congress in March, premier Li Keqiang pledged to “make the sky blue again”. Meanwhile, in January at the annual World Economic Forum pow-wow in Davos, president Xi Jinping took advantage of Trump’s economic nationalism to affirm China’s commitment to globalisation. This isn’t just empty rhetoric. Stunning drops in solar and wind costs turn global power market upside down. California sun produces so much power that electricity prices turn negative. "Yeah, they're out there havin' fun, In the warm California sun," sang The Rivieras in their 1964 hit. 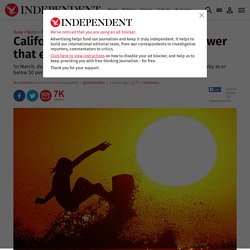 And it could not be more apt today as the sun in the state was so strong – and the number of solar farms so large – that electricity prices in the state have begun turning negative on the main power exchange, the US Energy Information Administration (EIA) has revealed. Solar made up a record figure of nearly 40 per cent of the electricity sent to the grid in the California Independent System Operator’s (CAISO’s) territory for a few hours on 11 March, after utility-scale solar farms grew by almost 50 per cent in 2016, the EIA said on its website. Graphs showing solar energy production and electricity prices, which drop below zero for several hours, in California on 11 March (US EIS) Canadian study: transition to renewables 'irreversible.' But U.S. needs to accelerate transformation. In a lengthy article by President Barack Obama published in the January 9, 2017, edition of Science magazine, the president pointed out that carbon-dioxide emissions from the U.S. energy sector dropped 9.5 percent from 2008-2015, at the same time the economy grew by 10 percent, and CO2 emitted per dollar of gross domestic product declined by 18 percent: The importance of this trend cannot be understated. 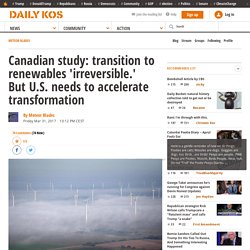 This “decoupling” of energy sector emissions and economic growth should put to rest the argument that combatting climate change requires accepting lower growth or a lower standard of living. In fact, although this decoupling is most pronounced in the United States, evidence that economies can grow while emissions do not is emerging around the world. [...]

At the same time, evidence is mounting that any economic strategy that ignores carbon pollution will impose tremendous costs to the global economy and will result in fewer jobs and less economic growth over the long term. Citrus peels could give activated charcoal a run for its money. There may be a new way of keeping orange and grapefruit peels out of our landfills – besides composting them, that is. Researchers have devised a method of using the peels to remove heavy metals from wastewater. The research was carried out by scientists at Spain's University of Granada, along with colleagues at Mexico's Center for Electrochemical Research and Technological Development, and Center of Engineering and Industrial Development. First, the peels are desiccated using a vacuum drying treatment, after which they're subjected to a proprietary chemical treatment.

As a result, their porosity and surface area increases. They're then granulated. Insane Light System Blasts the Energy of 10,000 Suns. The Smokestacks Come Tumbling Down – The Nearly Now. Donald Trump is the best thing to happen for climate action in years. That might sound crazy. These days, with the Trump gang on a smashing spree through America’s science and environmental laws, it’s easy to feel pessimistic. It’s easy to think that with progress being rolled back that took decades to put in place, we’ve lost the climate fight. But I think that’s wrong. I think Trump and his carbon cronies are not displaying strength, they’re showing enormous weakness — and not only have they not won, they're actually doing us a unintended favor.

Project Sunroof - Data Explorer. Google's Project Sunroof highlights huge solar potential of US homes. Back in 2015, Google launched a clever venture called Project Sunroof that used Google Maps data to assess the solar potential of individual roofs, giving homeowners a better idea of whether or not they should take the plunge. From humble beginnings in a few select cities the project has now expanded to cover every US State, and the data collected in the process makes a compelling case for solar indeed.

The upfront costs of installing rooftop solar might cause many to hesitate, particularly considering the unknowns around how much energy it would actually produce. How a 94-year-old genius may save the planet. Elon Musk offers to fix Australian power network in 100 days. Image copyright AFP Elon Musk, boss of electric car firm Tesla, says he can help solve South Australia's power crisis within 100 days - and if not he'll do it for free. The offer follows a series of blackouts in the state. On Thursday, Tesla executive Lyndon Rive had said the company could install 100-300 megawatt hours of battery storage in 100 days.

When asked on Twitter how serious he was about the offer, Mr Musk said if Tesla failed, there'd be no bill. "Tesla will get the system installed and working 100 days from contract signature or it is free. Image copyright Twitter. Can the Goodenough lab invent the battery to jumpstart the electric car revolution? He's the 94-year-old co-inventor of the lithium-ion battery. She's a physicist with a less than conventional idea of building a better battery. Together, can they develop the technology that will finally deliver us from our dependence on fossil fuels and kickstart the promised electric vehicle (EV) revolution? In 2014, Maria Helena Braga, a physicist at the University of Porto, published a paper on a novel type of superionic glasses that could solve the problems preventing solid electrolytes from being used in commercial batteries: their poor ionic conductivity at acceptable temperatures and lack of stability with respect to the metal.

The paper attracted the attention of several companies who were interested in commercializing the glasses. Tomato and egg waste may end up in your tires. Nanoparticles of rare metal and light convert carbon dioxide into fuel. Electrified fibers help pull uranium out of seawater. Controversial as it is, nuclear power remains a viable source of energy as we transition away from fossil fuels toward methods with far smaller carbon footprints. Underground uranium reserves may be on the decline, but the oceans contain billions of tons of the metal, just waiting for us to find a practical way to extract it. To that end, a Stanford team has developed a technique that improves the capacity, rate and reusability of materials that harvest uranium from seawater.

Despite the ongoing issues of radioactive waste disposal and the occasional Fukushima-scale disaster, nuclear energy can be more efficient and relatively cleaner than fossil fuel sources. Energy-Free AC? Heat-Reflecting Wrap Could Cool Without Power. Long-lasting flow battery uses neutral water to keep costs low. As renewable but intermittent sources like wind and solar continue to account for a larger part of our energy needs, flow batteries shape up as a very promising storage solution.

This terracotta heater uses candles to store and gradually release heat, allowing rooms to be warmed without electricity. The base of the device has room for four tea lights, which are placed underneath a metal grill. Old tires find new life as cleaner alternative to diesel. Flexible supercapacitor process brings phones that charge in seconds a step closer.