Gruoch of Scotland. Gruoch ingen Boite (fl. 1020–1054) was the daughter of Boite mac Cináeda son of Cináed III.[1] She is most famous for being the wife and queen of Mac Bethad mac Findlaích (Macbeth). 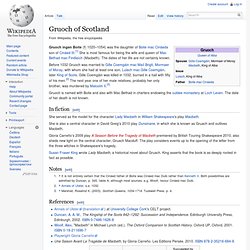 The dates of her life are not certainly known. Before 1032 Gruoch was married to Gille Coemgáin mac Maíl Brigti, Mormaer of Moray, with whom she had at least one son, Lulach mac Gille Coemgáin, later King of Scots. Gille Coemgáin was killed in 1032, burned in a hall with fifty of his men.[2] The next year one of her male relatives, probably her only brother, was murdered by Malcolm II.[3] In fiction[edit] Gloria Carreño's 2009 play A Season Before the Tragedy of Macbeth premiered by British Touring Shakespeare 2010, also sheds new light on the central character, Gruach Macduff.

Notes[edit] Jump up ^ It is not entirely certain that the Cináed father of Boite was Cináed mac Duib rather than Kenneth II. References[edit] Annals of Ulster (translation ) at University College Cork's CELT project.Duncan, A. Gruoch, The Real Lady MacBeth « HAGG[US] : A Kenan Breathe Project. My muse, my literary, my creative, my feminist idea of Scotland began with my interest in Lady Gruoch , the real Lady Macbeth. 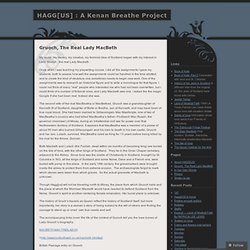 Once when I was teaching my playwriting course, I did all the assignments I gave my students, both to assess how well the assignments could be handled in the time allotted, and to create the kind of strutcture one sometimes needs to begin new work. One of the assignments was to research an historical figure and to write a monologue for that figure. I could not think of many “real” people who interested me who had not been overwritten, but I could think of a number of fictional ones, and Lady Macbeth was one. I asked the the magic Google if she had been real. Indeed she was. Some Biographical Insights about. Gruoch of SCOTLAND (ca 1015 - NA), best known to history as 'Lady Macbeth' because of William Shakespeare's play about her husband, Macbeth of Moray (Scottish name Mac Bethad mac Findláich), is a person about whom little is known for certain. 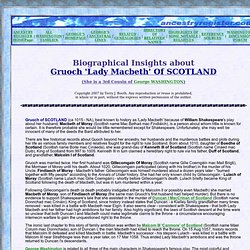 It is therefore probable she would be little remembered except for Shakespeare. Unfortunately, she may well be innocent of many of the deeds the Bard attributed to her. There are few historical records about Guoch beyond her ancestry, her husbands and the murderous battles and plots during her life as various family members and relatives fought for the right to rule Scotland. Family Tree for Gruoch, Lady Macbeth at RoyaList. Gruoch, Lady Macbeth is in a shaded box in the centre column : you may need to scroll down to see this, or just click here. 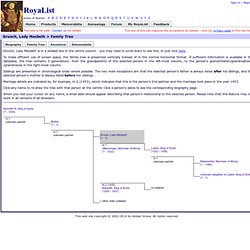 To make efficient use of screen space, the family tree is presented vertically instead of in the normal horizontal format. If sufficient information is available in the database, the tree contains 5 generations: from the grandparents of the selected person in the left-most column, to the person's grandchildren/grandnephews/grandnieces in the right-most column. Siblings are presented in chronological order where possible. The two main exceptions are that the selected person's father is always listed after his siblings, and the selected person's mother is always listed before her siblings. Gruoch "Lady Macbeth" What were Macbeth and his wife Gruoch really like? - News. THE NAME Macbeth has been so besmirched and blackened with blood it is now a byword for butchery and venal, vaulting political ambition. 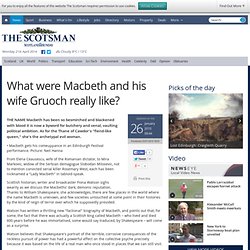 As for the Thane of Cawdor's "fiend-like queen," she's the archetypal evil woman. • Macbeth gets his comeuppance in an Edinburgh Festival performance. Picture: Neil Hanna From Elena Ceausescu, wife of the Romanian dictator, to Mira Markovic, widow of the Serbian demagogue Slobodan Milosevic, not to mention convicted serial killer Rosemary West, each has been nicknamed a "Lady Macbeth" in tabloid-speak. Scottish historian, writer and broadcaster Fiona Watson sighs wearily as we discuss the Macbeths' dark, demonic reputation. Watson has written a thrilling new "factional" biography of Macbeth, and points out that, for some, the fact that there was actually a Scottish king called Macbeth – who lived and died 600 years before he was immortalised, some would say traduced, by Shakespeare – will come as a surprise. "Even when I was quite wee I loved reading. Gruoch(Lady Macbeth) (GruochMacbeth)

Women in History of Scots Descent - Lady MacBeth was Upholding Her Rights. Kenneth MacAlpin, King of the Scots and Pics united the two races. 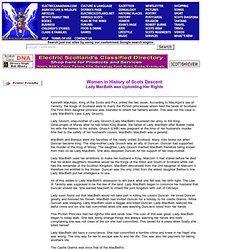 According to MacAlpin's law of Tanistry, the Kings of Scotland were to marry the Pictish princesses whom held the lands of Scotland. The First Born daughter princess was intended to inherit her father's estate.