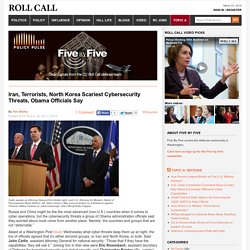 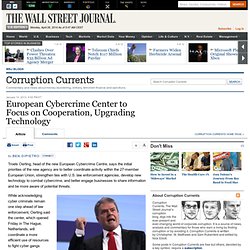 In Cyberattack on Saudi Firm, US Sees Iran Firing Back. Shamoon's code included a so-called kill switch, a timer set to attack at 11:08 a.m., the exact time that Aramco's computers were wiped of memory. 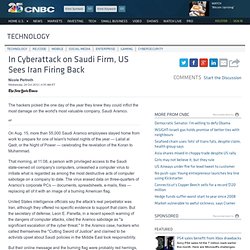 Shamoon's creators even gave the erasing mechanism a name: Wiper. Computer security researchers noted that the same name, Wiper, had been given to an erasing component of Flame, a computer virus that attacked Iranian oil companies and came to light in May. Iranian oil ministry officials have claimed that the Wiper software code forced them to cut Internet connections to their oil ministry, oil rigs and the Kharg Island oil terminal, a conduit for 80 percent of Iran's oil exports.

It raised suspicions that the Aramco hacking was retaliation. The United States fired one of the first shots in the computer war and has long maintained the upper hand.

UK Security Actors. Security experts to probe Winz computer hacking. Security experts will examine how the Work and Income computer system was hacked, allowing the secret details of some of the most vulnerable New Zealanders to be exposed. 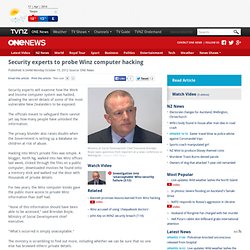 The officials meant to safeguard them cannot yet say how many people have unlocked the information. The privacy blunder also raises doubts when the Government is setting up a database on children at risk of abuse. Hacking into Winz's private files was simple. 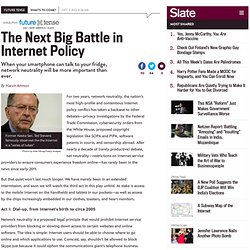 For two years, network neutrality, the nation’s most high-profile and contentious Internet policy conflict has taken a backseat to other debates—privacy investigations by the Federal Trade Commission, cybersecurity orders from the White House, proposed copyright legislation like SOPA and PIPA, software patents in courts, and censorship abroad.

Google Public Policy Blog. The internet in pieces. Courtney Love does the math. Today I want to talk about piracy and music. 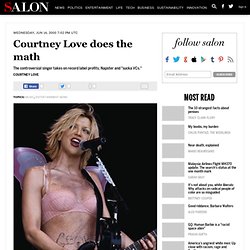 What is piracy? Piracy is the act of stealing an artist’s work without any intention of paying for it. I’m not talking about Napster-type software. I’m talking about major label recording contracts. Intellectual Property. #1_Privacy_and_Security_Research_Paper_Series.pdf (application/pdf Object) Blackboard Learning System. Spy malware infecting Iranian networks is engineering marvel to behold. 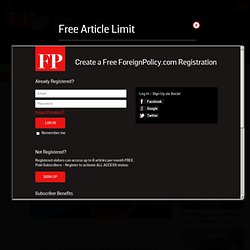 Keith Alexander said Monday. U.S. companies lose about $250 billion per year through intellectual property theft, with another $114 billion lost due to cyber crime, a number that rises to $338 billion when the costs of down time due to crime are taken into account, said Alexander, the director of the National Security Agency and commander of U.S. Cyber Command, in remarks Monday at the American Enterprise Institute. StratforLeaks: Google Ideas Director Involved in ‘Regime Change’ China calls US culprit in global ‘Internet war’ Google says computer hackers in China broke into the Gmail accounts of several hundred people, including senior government officials in the U.S. and political activists (AP Photo) BEIJING— The Chinese military accused the U.S. on Friday of launching a global “Internet war” to bring down Arab and other governments, redirecting the spotlight away from allegations of major online attacks on Western targets originating in China. 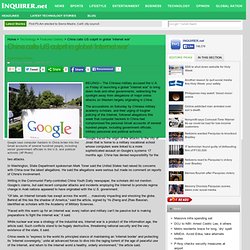 The accusations on Saturday by Chinese military academy scholars, and their urging of tougher policing of the Internet, followed allegations this week that computer hackers in China had compromised the personal Gmail accounts of several hundred people, including government officials, military personnel and political activists. r0g / agency for open culture and critical transformation. Juba. 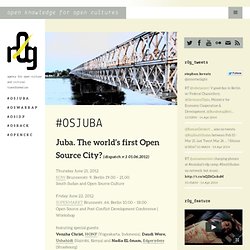 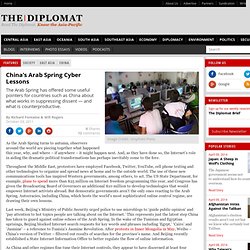 By Richard Fontaine & Will Rogers for The Diplomat October 03, 2011. The new underbelly. 1369118X.2012.676056 (application/pdf Object) Internet Freedom and the Digital Earthquake of 2011. Thank you for inviting me. Actually, the truth is that I invited myself because I care so much about these issues.