A Blog About Creative Designs,Photography,Animals,Art,Sports,Funny Lists 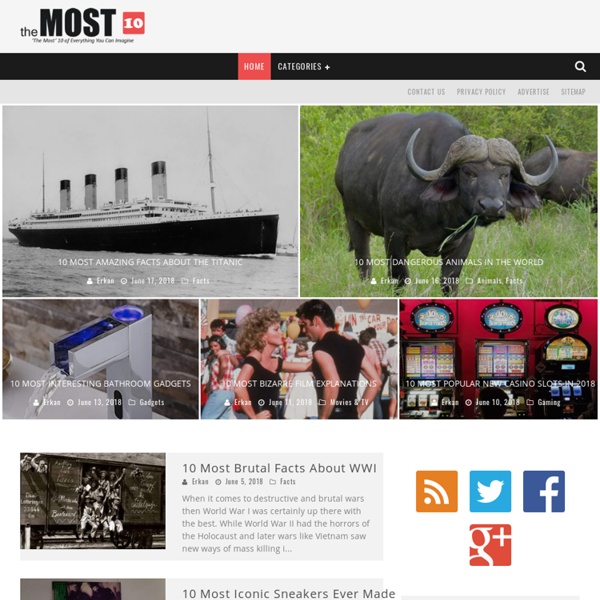 Dark Art by Anton Semenov Article by James Pond I am the owner of Pondly.com / art lover / electrical engineer / software developer / MBA in e-business student. I blog for pleasure and love to share my Internet findings. 100 Websites You Should Know and Use (updated!) Entertainment Meet David Peterson, who developed Dothraki for Game of Thrones There are seven different words in Dothraki for striking another person with a sword. Among them: “hliziﬁkh,” a wild but powerful strike; “hrakkarikh,”a quick and accurate strike; and “gezrikh,” a fake-out or decoy strike. But you won’t find these words in George R.

35 Brilliant Resume Designs Learn how to earn $125 or more per hour as a freelancer - Click Here Looking for hosting?. We recommend MediaTemple for web hosting. Use Code MTLOVESDESIGN for 20% off There is a part 2 to this post which is called 27 More Outstanding Resume Designs Part II. The Webby Awards Gallery + Archive AchievementBurning Love The Webby Awards is excited to honor the team behind ‘Burning Love’ — Ken Marino, Erica Oyama, Ben Stiller, Stuart Cornfeld, Jonathan Stern and Mike Rosenstein — with a Webby Special Achievement Award for their groundbreaking Web series. By successfully challenging the standards of network television with regard to both production quality and distribution, Burning Love has set a new benchmark for quality content on the Web. With an all-star cast, the series and its creators demonstrate a unique understanding of how to engage audiences on the Internet by engaging fans directly through strategic social media.

Piety within Progression AUGUST DEAL For a limited time only. The economy has been a bitch lately hasn't it? I could insert a little political rant here and cuss out different parites for being idiots but I won't. I would rather give you 40% off of all digitals at my store. Courage to Refuse - About Us Courage to Refuse was founded following the publication of The Combatants Letter in 2002, by a group of 50 combat officers and soldiers. The initiators of the letter, Captain David Zonshein and Lieutenant Yaniv Itzkovits, officers in an elite unit, have served for four years in compulsory service, and another eight years as reserve soldiers, including long periods of active combat both in Lebanon and in the occupied territories. During their reserve service in Gaza, in the midst of the second Intifada, the two realised that the missions confided to them as commanders in the IDF had in fact nothing to do with the defence of the State of Israel, but were rather intended to expand the colonies at the price of oppressing the local Palestinian population. Many of the commands issued to them were, in fact, harmful to the strategic interests of Israel.

40+ Interesting Pinterest Boards for Designers Only recently, the startup social pinboard site Pinterest, has taken the social bookmarking scene by storm as it earned its fame as the fastest growing social networking site. Since then, Pinterest continues to grow and now it hold a #45 Alexa ranking making popular social bookmark sites like digg.com, delicious.com, stumbleupon.com look like they had better days (see screenshot from Alexa at the bottom). This soaring popularity of Pinterest has caught the attention of designers and other creative individuals, and in no time, the virtual pinboard became popular among the design community. One reason for this is the simple yet powerful Pinterest interface and how great it is for structuring work, ideas, inspiration etc. and at the same time build an online portfolio to show of some creative juice. Pinterest provide a convenient and visual way for users to see, repin and comment on other users collections and pins and the pleasure of doing this is what makes Pinterest so viral. Sonny M.

Home for creative enthusiast About Words Without Borders Founded in 2003, Words without Borders promotes cultural understanding through the translation, publication, and promotion of the finest contemporary international literature. Our publications and programs open doors for readers of English around the world to the multiplicity of viewpoints, richness of experience, and literary perspective on world events offered by writers in other languages. We seek to connect international writers to the general public, to students and educators, and to print and other media and to serve as a primary online location for a global literary conversation. Every month we publish eight to twelve new works by international writers. We have published works by Nobel Prize laureates J.M.G. Le Clézio and Herta Müller and noted writers Mahmoud Darwish , Etgar Keret , Per Petterson , Fadhil Al-Azzawi , W.G.

Toolbox - Tool for youth work and projects - or recruit participants Created to help you find and share useful training Tools, the Toolbox for training is an online catalogue you can browse through freely or even contribute to! Remember that tools alone have no influence. It is your task to adapt them to your objectives, context and target group, but most importantly to YOUR OWN SKILLS to turn them into something powerful... The Toolbox wants to be a learning community for trainers and youth workers in order to share, debate and increase the quality of educational methods in their daily work. Top 40 Useful Sites To Learn New Skills The web is a powerful resource that can easily help you learn new skills. You just have to know where to look. Sure, you can use Google, Yahoo, or Bing to search for sites where you can learn new skills