Top Ten of Anything and Everything. 03 October is: Virus Appreciation Day FACT: Because viruses are such simple organisms made up of just genetic code (DNA or RNA) and a protein shell, some scientist feel that they should not be classified as living. 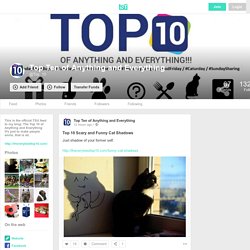 They may be an intermediate step between organic chemicals and more complex living cells like bacteria. Viruses are extremely small, only 20 to 250 nanometres in size so thousands of them could fit into one cell, but don’t let them in they will just wreck the place and leave a mess. - #viralchat #virus #sickness See More. 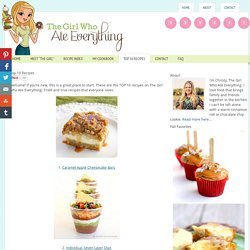 Top 10 Recipes Welcome! If you’re new, this is a great place to start. Top 10 For Everything. A Blog About Creative Designs, Photography, Animals, Arts, Sports, Gadgets, Places, Funny Lists. ListOTop - Everything Top 10. The Top 10 of Anything and Everything!!! Top 10 keyboard shortcuts everyone should know. Using keyboard shortcuts can greatly increase your productivity, reduce repetitive strain, and help keep you focused. 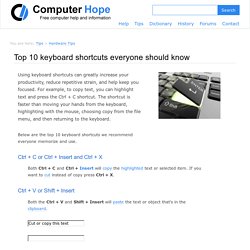 For example, to copy text, you can highlight text and press the Ctrl + C shortcut. The shortcut is faster than moving your hands from the keyboard, highlighting with the mouse, choosing copy from the file menu, and then returning to the keyboard. Below are the top 10 keyboard shortcuts we recommend everyone memorize and use. Ctrl + C or Ctrl + Insert and Ctrl + X Both Ctrl + C and Ctrl + Insert will copy the highlighted text or selected item. 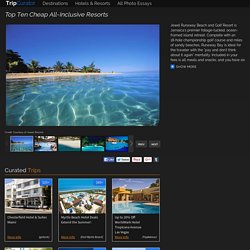 Complete with an 18-hole championship golf course and miles of sandy beaches, Runaway Bay is ideal for the traveler with the "pay and don't think about it again" mentality. Included in your fees is all meals and snacks; and you have six different eating establishments to choose from. Five bars will serve you unlimited premium drinks, all non-motorized water sports and your green fees are complimentary, and free transfers will shuttle you to and from the airport. Daily activities, weekly dive-in movies, and volleyball, basketball, and tennis round out the roster of all-inclusive options. Surrounded by a lush palm grove, Playa del Carmen's Riu Tequila is the ultimate in relaxing atmospheres, where the only thing you're obligated to do is put your feet up. Top 10 Cities : The Rough Guide to 2015. 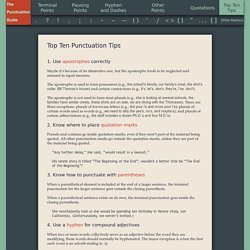 Use apostrophes correctly Maybe it’s because of its diminutive size, but the apostrophe tends to be neglected and misused in equal measure. The apostrophe is used to form possessives (e.g., the school’s faculty, our family’s crest, the shirt’s collar, Bill Thomas’s house) and certain contractions (e.g., it’s, let’s, she’s, they’re, I’ve, don’t). The apostrophe is not used to form most plurals (e.g., she is looking at several schools, the families have similar crests, these shirts are on sale, we are dining with the Thomases). There are three exceptions: plurals of lowercase letters (e.g., dot your i’s and cross your t’s); plurals of certain words used as words (e.g., we need to tally the yes’s, no’s, and maybe’s); and plurals of certain abbreviations (e.g., the staff includes a dozen Ph.D.’s and four M.D.’s). 2. 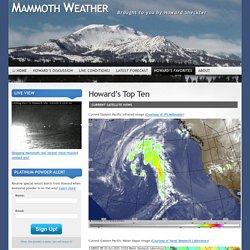 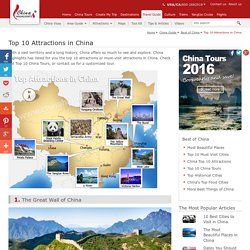 China Highlights has listed for you the top 10 attractions or must-visit attractions in China. Check out Top 10 China Tours, or contact us for a customized tour. 1. The Great Wall of China In the eyes of most travelers, you haven’t been to China if you haven’t climbed the Great Wall. One of the iconic symbols of China, the Great Wall is the longest wall in the world, an awe-inspiring feat of ancient defensive architecture.

The wall spans from China’s western frontier to the east coast, totaling around 5,000 km (3,100 miles), but the most integrated and best preserved sections are close to Beijing. 2. The Terracotta Army has laid underground for more than 2,000 years. Top 10 London Attractions. 1. 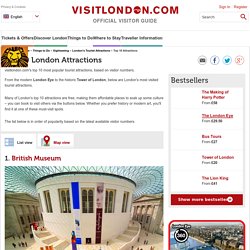 British Museum Free The world-famous British Museum exhibits the works of man from prehistoric to modern times, from around the world. Highlights include the Rosetta Stone, the Parthenon sculptures and the mummies in the Ancient Egypt collection. Some exhibitions require tickets.Read More 2. The crowning glory of Trafalgar Square, London's National Gallery is a vast space filled with Western European paintings from the 13th to the 19th centuries. 3. Words at Play - A Fun Look At Languague, Word Histories, and more. TTC Top 10 - The Travel Corporation. Our Top 10 Bucket List is incredibly special to us. 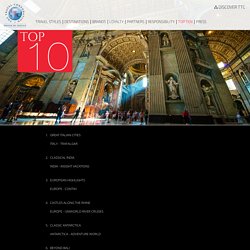 From dining on a Tuscan Villa on an olive oil estate to searching for penguins, seals and whales while cruising the waters around Antarctica, our Top 10 Bucket List reflects our passion for travel and our desire to help you explore the world. Our global team have been sharing their personal Top Ten Bucket Lists to showcase all of the incredible trips that our 30 award winning brands have to offer around the world. We encourage you to do the same! KBB.com Awards and 10 Best Lists. Model year after model year, cars just keep getting better. 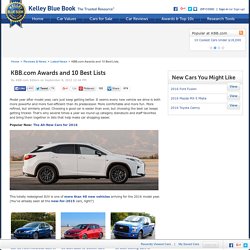 It seems every new vehicle we drive is both more powerful and more fuel-efficient than its predecessor. More comfortable and more fun. More refined, but similarly priced. Choosing a good car is easier than ever, but choosing the best car keeps getting trickier. That's why several times a year we round up category standouts and staff favorites and bring them together in lists that help make car shopping easier. Popular Now: The All-New Cars for 2016 This totally redesigned SUV is one of more than 40 new vehicles arriving for the 2016 model year. Build Your Own List. Top 10 Motivational Quotes. TOP 10 — Daily Overview. Top 10 Network Cameras and Streaming Video Webcams - EarthCam. ESF Top Ten New Species. Click on the images above to access species pages. An international committee of taxonomists selected the top 10 from among the approximately 18,000 new species named during the previous year and released the list to coincide with the May 23 birthday of Carolus Linnaeus, the father of modern taxonomy.