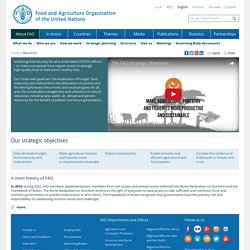 Quinoa’s legacy is celebrated at headquarters with Peru and Bolivia during World Food Week. Also, this year a new partnership agreement is signed with the International Federation of Red Cross and Red Crescent Societies (IFRC),the world's largest humanitarian network, to help improve food security and strengthen the resilience of vulnerable communities. FAO and the IFRC agree that FAO will provide technical guidance to complement IFRC's extensive network of 13 million volunteers - who in turn reach some 150 million people - to assist poor households cope with threats and disasters that impact agriculture, food security and nutrition. 2006FAO unveils its high-tech Crisis Management Centre to fight bird flu and other animal health or food safety emergencies. 83% of consumers demand increased transparency – fmcg news. British consumers have had their trust in the food industry severely dented by food scandals such as the horsemeat crisis, according to independent research commissioned by Trace One. 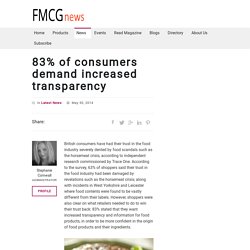 Tech innovations that could reduce food waste. Cutting-edge technology – from intelligent food labelling to mobile phone-controlled apps and even smart fridges – is set to transform the way consumers shop and control their domestic food waste. 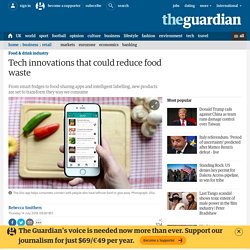 On sale for the first time in the UK this autumn is a highly anticipated smart fridge from Samsung. Costing £4,499, the Family Hubrefrigerator is connected to the internet via Wi-Fi. The device has three built-in cameras so owners can check its contents while out shopping. Report: one-third of world’s food wasted annually, at great economic, environmental cost. 11 September 2013 – The waste of some 1.3 billion tons of food each year is causing economic losses of $750 billion and significant damage to the environment, according to a United Nations report launched today. 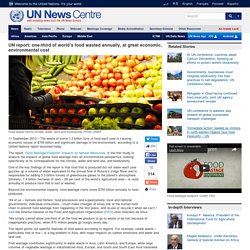 How we use your food. Once your food is received into one of our 20 UK-wide warehouses, it will be stored, sorted and distributed to charities in the local area. 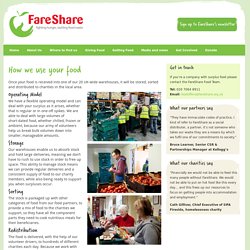 Operating Model We have a flexible operating model and can deal with your surplus as it arises, whether that is regular or in one-off spikes. We are able to deal with large volumes of short-dated food, whether chilled, frozen or ambient, because our army of volunteers help us break bulk volumes down into smaller, manageable amounts. French law forbids food waste by supermarkets. France has become the first country in the world to ban supermarkets from throwing away or destroying unsold food, forcing them instead to donate it to charities and food banks. 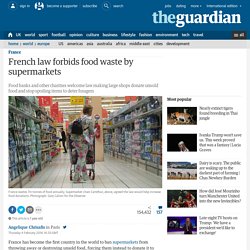 Under a law passed unanimously by the French senate, as of Wednesday large shops will no longer bin good quality food approaching its best-before date. Charities will be able to give out millions more free meals each year to people struggling to afford to eat. 'Trade facilitates sustainability': The trouble with the local food movement. Long before Greg Page became the executive chairman of Cargill, one of the world’s largest food companies, the company dispatched him to Thailand to build a chicken plant in a rural province north of Bangkok. 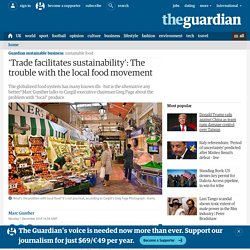 “It was a chance”, he said, “to start a business from scratch in an overseas location, while having access to the resources of Cargill”. Plus, he noted with a smile, he was “12 hours from headquarters ... I loved it”. Today, Cargill Meats Thailand imports soymeal from Brazil and Argentina to feed chickens, which are raised, slaughtered, processed, cooked and frozen into a wide range of products, most destined for restaurants and supermarkets in Japan, Europe, Canada and Hong Kong. Written evidence - Department for Environment, Food and Rural Affairs. 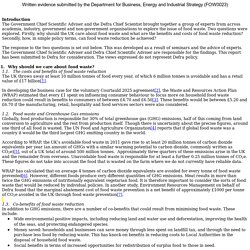 Two questions were explored. Firstly, why should the UK care about food waste and what are the benefits and costs of food waste reduction? Secondly, how, in simple policy terms, can food waste reduction be achieved? The response to the two questions is set out below. Why should we care about food waste? 1.1. The UK throws away at least 10 million tonnes of food every year, of which 6 million tonnes is avoidable and has a retail value of £17 billion[1]. 1.2. Globally, food production is responsible for 30% of total greenhouse gas (GHG) emissions, half of this coming from land conversion to agriculture and the rest from production itself. 1.3. 2.1. 2.2. 2.3. 2.4. Written evidence - THE PACKAGING FEDERATION. Written evidence submitted by the Packaging Federation (FOW0010) Submitter The following submission is made by Dick Searle (Chief Executive) on behalf of The Packaging Federation, a not-for-profit organisation representing the UK Packaging Manufacturing Industry. 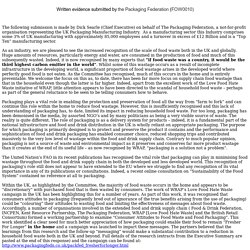