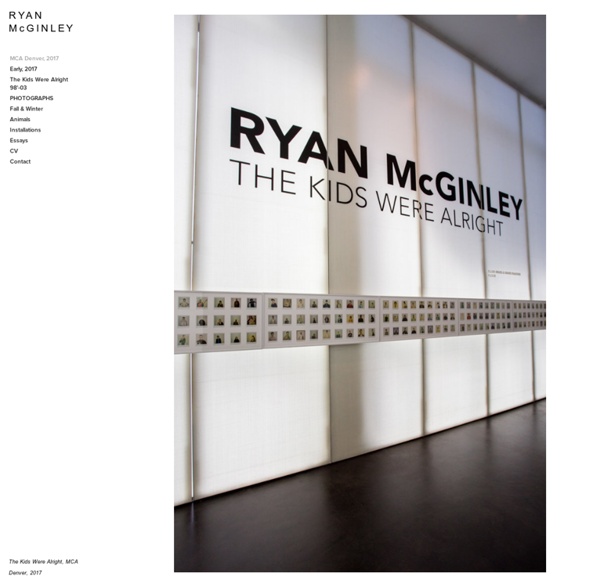 Johan Rosenmunthe Thursday, 11 September 2014 Johan Rosenmunthe Work from Tectonic. Kevin Russ Mount Rainier National Park, Kevin Russ (Source: nectarinejam, via jenniferpeach) mullitover: JONATHAN CHERRY: What did you want to be growing up? Wolfgang Tillmans Wolfgang Tillmans (born 1968) is a German Fine-art photographer. His diverse body of work is distinguished by observation of his surroundings and an ongoing investigation of the photographic medium’s foundations. In 2000, Tillmans was the first photographer - and also the first non-English person - to be awarded the Tate annual Turner Prize.

Artist Jeff Wall is renowned for large-format photographs with subject matter that ranges from mundane corners of the urban environment to elaborate tableaux that take on the scale and complexity of nineteenth-century history paintings. Wall seized on the idea of producing large, backlit photographs after seeing an illuminated advertisement from a bus window. He had recently been to the Prado, Madrid, and the artist combined his knowledge of the Western pictorial tradition – he had studied art history at London’s Courtauld Institute – with his interest in contemporary media to create one of most influential visions in contemporary art. Wall calls his photographs, after Charles Baudelaire, ‘prose poems’, a description that emphasises how each picture should be experienced rather than used to illustrate a pre-determined idea or a specific narrative.

Lele Saveri, Barricades - Collector Daily JTF (just the facts): Published in 2017 by Pau Wau Publications (no book link, publisher site here). Coverless, Japanese stab bound with red string, 40 pages, with 21 color photographs. The book is housed in a rumpled Tyvek envelope with the title and artist’s name printed on the outside. The pages come French folded/perforated with images on both the inside and outside. There are no texts or essays. In an edition of 50 copies. Vermibus Over-consumption and the unchecked use of our natural resources to serve that consumption, is wreaking havoc on our environment and on our minds. Our unabated need for the latest products and ideas leaves us only wanting more, at the expense of the world around us. Fueling this unchecked desire is a commercial media whose goal is the promotion of more consumption through every outlet known. Newspapers, Magazines, Television, the Internet, and even the Public Space that we collectively share, all serve to promote our desire for more. In an effort to examine the issue of over-consumption, “Buy Nothing Day” began in 1992 by artist Ted Dave, and participants were asked to refrain from purchasing goods for 24hrs. 22 years later this single act of defiance has grown into a worldwide movement that now takes place in 65 countries and includes thousands of participants. All fotages were sent by the activists.

Marina Abramović Marina Abramović (Serbian Cyrillic: Марина Абрамовић; born November 30, 1946) is a Serbian[1][2][3] and former Yugoslav artist based in New York, a performance artist who began her career in the early 1970s. Her work explores the relationship between performer and audience, the limits of the body, and the possibilities of the mind. Active for over three decades, she has been described as the "grandmother of performance art." She pioneered a new notion of identity by bringing in the participation of her observers. Her art focuses on the theme of “confronting pain, blood, and physical limits of the body,” [4] while relying on the extent of these discomforts based on the actions of her audience members.

Mert and Marcus Mert & Marcus Mert Alas and Marcus Piggott, working name "Mert and Marcus", are fashion photographers who work together on a collaborative basis. Their work and style is influenced by the photographer Guy Bourdin and have pioneered the use of digital manipulation within their field. Mert and Marcus, born in 1971 in Turkey and Wales respectively, met for the first time in England in 1994 after having worked for a brief period in different areas, the first in classical music and the second in graphic design. Marcus was an assistant photographer and Mert was a fashion photo modeler. After working together in the photography business, they decided to create a team.