Top 10 - The World's Best Trips, Adventures, and Places to Visit 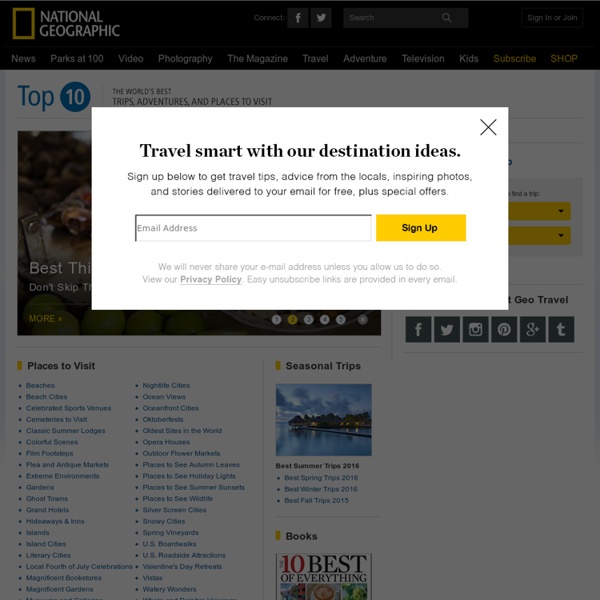 National Parks Train Tours and Trips :: Vacations By Rail :: America’s national parks are a popular vacation destination. Get back to nature with a national parks train tour and visit North America’s natural treasures. See Old Faithful, bubbling hot springs and fumaroles in Yellowstone National Park. Admire the towering rock formations and tumbling waterfalls in Yosemite National Park. Stand in awe of the massive Grand Canyon. Sign Up for FREE National Parks By Rail Webinar The World's Top 50 Travel Destinations in 2012 Check out Viator’s Top 50 Destinations in 2014! Editor’s Note: This post is part of the Viator Travel Awards, an annual awards competition where we – along with our readers, travelers, and fans – select the top things to do and see in each of the major regions we serve, the top things to do in our most popular tour categories, and more. Where will you go in 2014? We can’t plan your vacations for you, but we can certainly help you narrow your wish list of destinations with our annual Top 50 Travel Destinations list. Some of these Top 50 Travel Destinations have major events in 2014 that you won’t want to miss. How many of the Top 50 places we’ve selected will you visit in 2014? Dubrovnik, Croatia ‘Game of Thrones’ is filmed in Dubrovnik Fans of the TV show “Game of Thrones” will likely recognize the Croatian city of Dubrovnik, although they may not have believed it’s a real place. Browse Game of Thrones tours in Dubrovnik Adelaide, Australia Adelaide Does winter have you singing the blues?

National Scenic Byway A National Scenic Byway is a road recognized by the United States Department of Transportation for one of the six "intrinsic qualities": archeological, cultural, historic, natural, recreational, and/or scenic. The program was established by Congress in 1991 to preserve and protect the nation's scenic but often less-traveled roads and promote tourism and economic development. The National Scenic Byways Program (NSBP) is administered by the Federal Highway Administration (FHWA). The most scenic byways are designated All-American Roads, which must meet two out of the six intrinsic qualities. The designation means they have features that do not exist elsewhere in the United States and are unique and important enough to be tourist destinations unto themselves. As of November 2010, there are 120 National Scenic Byways and 31 All-American Roads, located in 46 states (all except Hawaii, Nebraska, Rhode Island, and Texas).[2] History[edit] On August 10, 2005, President George W. Requirements[edit]

Aluguel de férias, quartos particulares, sublocações por noite - Acomodações na Airbnb Travel & Destinations Cover Upload Cover Image Loading... List List Travel & Destinations Contributors by miokelly Drag to Reposition Save Changes Cancel Keyboard Shortcuts Timeline SShuffle JNext KPrevious FFancy AAdd to List CComment HShare EnterView Thing Slideshow JNext KPrevious FFancy CComment PPlay / Pause LLoop Share This Thing Share This Comment Share This List Share This Gift Campaign Share {{name}}'s Profile Preview Widget size px x px Contents Add this to your website by copying the code below. About Fancy Anywhere Fancy Anywhere enables your visitors to buy things on Fancy directly from your own blogs and websites. To + Add email addresses or user names Note Security Update The Heartbleed Bug For more information visit heartbleed.com Due to the recently discovered vulnerability "Heartbleed", we have signed you out to protect your account. We are not aware of an exploitation of this issue on Fancy, but as a precaution, we advise you change your password if you use an email and password to sign in. Don't show this again