Massive solar and wind farms could bring vegetation back to the Sahara. Switching from fossil fuels to renewable energy is an important and necessary step towards averting climate change. 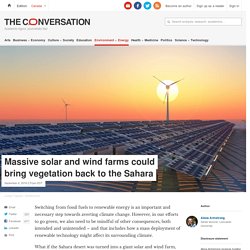 However, in our efforts to go green, we also need to be mindful of other consequences, both intended and unintended – and that includes how a mass deployment of renewable technology might affect its surrounding climate. What if the Sahara desert was turned into a giant solar and wind farm, for instance? Seaweed could be scrubbing way more carbon from the atmosphere than we expected. Nigerian scientists develop “home grown” GMO crops to ensure food security. 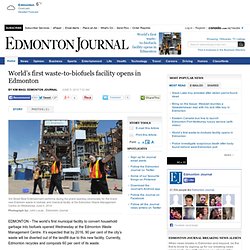 It’s expected that by 2016, 90 per cent of the city’s waste will be diverted out of the landfill due to this new facility. Currently, Edmonton recycles and composts 60 per cent of its waste. Q: How does it work? A: Enerkem, the Quebec-based company that owns the plant, will handle the operations, with the city supplying 100,000 tonnes of sorted municipal waste that can’t be recycled or composted. This material is “a mixture of non-recyclable plastics, non-recyclable fibre, there’s wood, there’s even such things as shingles — that gets shredded down and that’s what we are fed with,” said Vincent Chornet, CEO of Enerkem. INDRA project. Back to Eden? 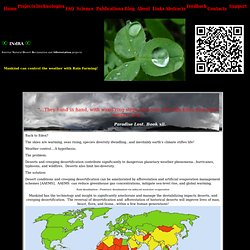 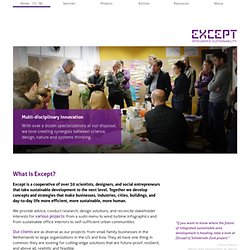 We consult, research, design, and manage. Our team includes a wide range of disciplines to thoroughly synchronize with our client's ambitions and reality. Because we seek optimal solutions for each situation, the results of our work are diverse, ranging from a sustainable sushi menu for a local restaurant to transformation trajectories for cities. Integrated Sustainability. Polydome - High Performance Sustainable Polyculture Agriculture. Www.haygrove.co.za/haygrove-polytunnels-online-brochure/files/assets/downloads/publication.pdf. Green Toolbox by International Young Naturefriends IYNF. Green Toolbox by International Young Naturefriends IYNF. Www.daff.gov.za/doaDev/sideMenu/ForestryWeb/dwaf/cmsdocs/Elsa/Docs/Forests/urban greening strategy.pdf. Www.daff.gov.za/doaDev/sideMenu/ForestryWeb/dwaf/cmsdocs/Elsa/Docs/Forests/urban greening strategy.pdf. Www.saflii.org/za/cases/ZAFSHC/2009/101.pdf. Brooklyn to Transform Canal Into 'Sponge Park'

(Read original story here)By Karissa Rosenfield One of the United States’ most polluted bodies of water is about to receive a much needed makeover. 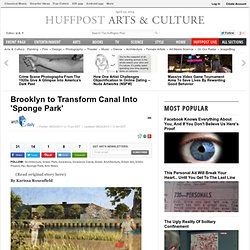 In early 2014, construction will begin on a pollution-preventing greenscape that will run alongside Brooklyn’s Gowanus Canal. The proposal, dubbed Sponge Park, was envisioned more than five years ago by Susannah Drake of dlandstudio and has just now “soaked up” enough funds to move forward. Phase one of the $1.5 million proposal, which is expected to be complete in the summer of 2015, will begin near Second Street. In Depth. PROVINCIAL DEPARTMENTS OF AGRICULTURE. The core function of the Department is to facilitate agricultural production in the Eastern Cape through the provision of technical support to farmers and community based initiatives and the creation of a conducive environment for increased investment in agriculture. 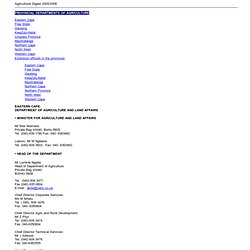 In many instances the Department will actively intervene and support initiatives in order to enhance the unique competitive advantages of our Province for the benefit of all. These interventions will be mainly directed at improving the quality of life of those operating in this sector and redressing the inequalities created by the past. In an effort to achieve these ideas the Department will embark in a holistic development approach by participating in the formulation of integrated development plans (IDP’s) and other planning initiatives at local level and within the specified clusters in the Province.

Co-operation with the National Departments will in all instances be mandatory. Extension officers The Head: Mr W Barnes. World set to use much more wastewater - U.N.-backed study. By Environment Correspondent Alister Doyle OSLO (Reuters) - The world is set to use far more treated wastewater to help irrigate crops and feed a rising population as fresh water supplies dry up, a team of U.N. 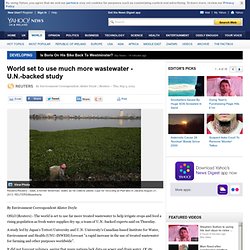 -backed experts said on Thursday. A study led by Japan's Tottori University and U.N. University's Canadian-based Institute for Water, Environment and Health (UNU-INWEH) forecast "a rapid increase in the use of treated wastewater for farming and other purposes worldwide". It did not forecast volumes, saying that many nations lack data on sewer and drain water. Many governments and companies have so far overlooked the economic potential of vast amounts of wastewater, UNU-INWEH director, Zafar Adeel, said. North America generates about 85 cubic km (20 cubic miles) of wastewater every year, of which about 61 cubic km is treated, roughly the amount flowing over Niagara Falls, and only four percent of that is re-used. Human waste in rivers used to irrigate crops. The river water contains levels of E.coli bacteria that are as much as 10 000 times more than allowed by the World Health Organisation and the Department of Water Affairs, according to a study report obtained by The Times. 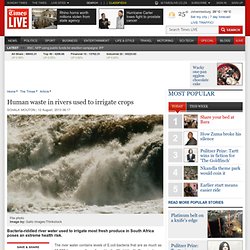 Not only is this dangerous for people but it might have a highly damaging effect on this country's international trading status and cause a suspension of exports of fruit and vegetables, the report warns. The extensive research project was launched in 2007 amid growing concern that South African river water used for irrigating crops no longer met export standards set by the EU for fresh produce, or international health standards. Www.weblife.org/humanure/pdf/humanure_handbook_third_edition.pdf. State of the Environment South Africa. 2012 South Africa Environment Outlook report process North West Province State of the Environment - 2013 With this project, the Department of Economic Development, Environment, Conservation and Tourism (NW DEDECT) aims to consolidate information on issues of importance in the North West, in order to update and revise the Environmental Outlook report for the Province. 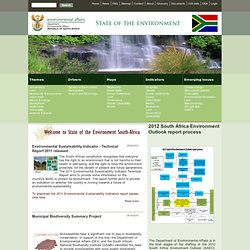 This will be the fourth instalment of the State of Environment Report for the North West, the previous reports having been published in 1995, 2002 and 2008. Further information can be obtained from: Mr. GDS Home. Analysis of the Green Drop assessments and site inspection results indicate that the bulk of Free State municipalities did not meet the requirement of the regulation programme.With the exception of some positive trends, it is the regulatory impression that wastewater services management are not on par with good practice and legislative compliance. 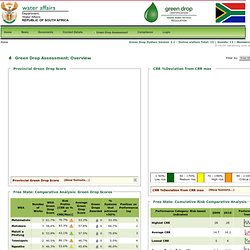 The most encouraging aspect about the Province is a 250% improvement in assessment rates compared to 2009. A total of 100% municipalities were assessed during the 2010/11 Green Drop Certification Wastewater services delivery is performed by twenty (20) Water Services Authorities in the Free State via an infrastructure network comprising of 95 wastewater collector and treatment systems. A total operational flow of 198 Ml/day is received at the 95 treatment facilities, which has a collective hydraulic design capacity of 482 Ml/day (as ADWF). Working for Wetlands. FSPSDF_Phase2Report_7March2013.pdf.