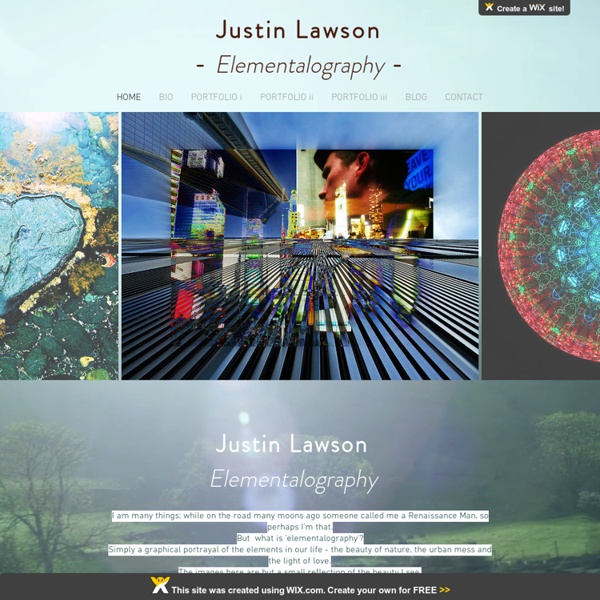 tone-and-pulse "Many can listen to music, but few can perform and compose. But you cannot even listen if you can hear only in terms of the past. What should we make of one of Mozart's symphonies if our ears were attuned only to the music of tom-toms? We might get the rhythms, but almost nothing of the harmony and melody. The joy of cloudspotting: 10 incredible visions in clouds A “cloud on the horizon” means that something bad is about to happen. Meanwhile, someone with their “head in the clouds” is thoroughly out to lunch. As Gavin Pretor-Pinney points out in today’s talk, clouds get a bad rep when it comes to language. Gavin Pretor-Pinney: Cloudy with a chance of joy “But I think they’re beautiful, don’t you?” he says. “It’s just that their beauty is missed because they’re so omnipresent, so commonplace that people don’t notice them … unless they get in the way of the sun.”

ekit, phonecards, prepaid sim cards and international cell phones for international travelers When traveling, you need an international mobile phone that works on the GSM frequency bands used in the countries you are visiting. An international phone, often described as a global phone, travel mobile, travel phone, world phone or tri-band phone is simply a GSM phone that operates on three GSM frequency bands. Already have an international phone? You need to ensure your international phone is unlocked. Myths and Legends in Sleep Rip van Winkle was a legendary sleeper. The subject and title of a short story by Washington Irving, Rip Van Winkle slept for 20 years and woke to found his children grown and his former home in the British colony of New York now part of the new United States. Van Winkle's story, which is similar to many stories through the centuries about people who sleep for decades or centuries, said he was asleep under supernatural or magical means. Van Winkle's state may be more accurately called a coma, because even with modern medicine nobody sleeps for more than a day or two continuously.

18 Remarkable Photos of Nature Reclaiming Civilization Source: danjur Humanity is often proud of its great feats of engineering, we are dazzled by the structures we can create, by our mastery over our surroundings, and all of this is for good reason. The science and mathematics behind the structures of civilization are amazing, but nature shows no particular respect for all the hard work. Free and Pro Wiki Hosting What is Wiki? According to Wikipedia, the world largest wiki site: A Wiki ([ˈwiː.kiː] <wee-kee> or [ˈwɪ.kiː] <wick-ey>) is a type of website that allows users to add, remove, or otherwise edit and change most content very quickly and easily via website. And that is it! At the Wikidot.com publishing network we offer everyone a Site (your-site-name.wikidot.com) — a customizable place in the Internet where Users can edit content, upload files, communicate and collaborate. When using any of the Wiki systems you do not have to care about technical details (like HTML language, how to edit pages, how to create forum for your community etc.).

Meat industry has a cow over US dietary guidelines A nationwide food fight is heating up after the US government accepted final public comments this month on a scientific advisory report recommending Americans reduce their meat consumption for the sake of healthier and more environmentally sustainable diets. The meat industry is fighting back against those who want healthier guidelines, and this battle looks like it could go the distance. Written by a panel of medical, public health and nutrition experts, the 571-page report provides the scientific basis for the government’s dietary guidelines for Americans, a highly influential policy document updated every five years that informs federal nutrition policy and food assistance programs, as well as associated educational and marketing efforts.

Aurora australis as seen from the Australian and New Zealand mainlands Updated The swirls, twists, and curtains of light of the aurora australis were visible from the Australian and New Zealand mainland overnight. The natural light display caused a flurry of excitement, captured on social media. As explained by the Australian Bureau of Meteorology, the phenomenon is caused when electrically charged electrons and protons accelerate down the Earth's magnetic field lines and collide with neutral atoms in the upper atmosphere — usually about 100 kilometres above the Earth.

» Flower Power In late 1967 Bernie Boston was a reporter for the Washington Star a now-defunct newspaper. After he took this famous picture Star publishers didn’t see the value of the image and buried it the A section of their paper. Not deterred Bernie Boston sent the image out to various photo competitions which resulted in a number of awards, prizes and international recognition. The end of the 60s saw a number of anti-Vietnam war protests. Covering one of the last big protests Bernie sat with his camera on a wall at the Mall Entrance to the Pentagon. While the protest neared the gates Bernie watched as a National Guardsman lieutenant marched a group of armed men into the sea of demonstrators.

Hot or not: what's packing the uni lecture theatres Packing them in: the popularity of courses, and even subjects, ebbs and flows but this is the decade of global studies and health courses. Photo: Craig Abraham From arts to aviation, sports management to veterinary science, Victoria's universities offer a plethora of courses. But what are the emerging areas grabbing today's students' interest and what's driving student choice? According to Victorian Tertiary Admissions Centre (VTAC) data, health subjects are right out on top when it comes to today's students' choice of university course. More than 26,000 students put undergraduate health courses at the top of their list when applying through VTAC to university in 2014.

These 'Mind-Blowing And Humbling' Instagram Photos Will Remind You Of Earth's Wild Beauty Sam and Amanda Ciurdar often find themselves retreating into nature, captivated by Earth’s beauty. The Southern California couple, both devout Christians, take every opportunity to travel into the wilderness with their cameras in tow. Whether it's the forests of Oregon or the sand dunes of their home state, nature is the place for them to meditate and be present. “It feels like that’s truly where we belong,” Amanda told HuffPost. “There’s just something that happens in our souls where we’re able to disconnect from the busyness of life.”