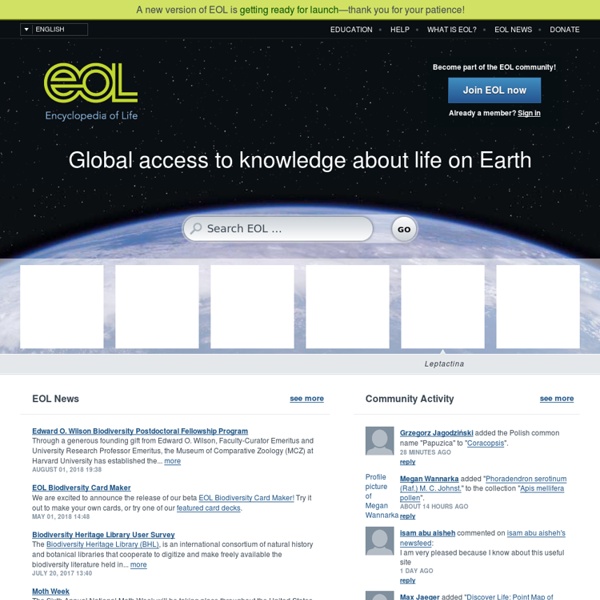 The 7 Weirdest Glow-in-the-Dark Creatures by Natalie Wolchover | March 27, 2012 12:57pm ET Credit: catalano82 | Creative CommonsGlowing is a common trick in nature. Bioluminescence, the ability to give off light through a simple chemical reaction, is so useful that it has evolved independently at least 50 different times, and can be found among such diverse lifeforms as mushrooms, fireflies and terrifying deep sea creatures. Whether to ward off predators, attract prey, rid cells of oxygen, or simply cope with living in the perpetual darkness of the deep ocean, bioluminescence is one of life's most ingenious tools. Here are some of the coolest and weirdest creatures that possess the ability to glow, many of which are currently on display in a new exhibit at the American Museum of Natural History in New York. Click on the photos to take a closer look.

99 Resources to Research & Mine the Invisible Web College researchers often need more than Google and Wikipedia to get the job done. To find what you're looking for, it may be necessary to tap into the invisible web, the sites that don't get indexed by broad search engines. The following resources were designed to help you do just that, offering specialized search engines, directories, and more places to find the complex and obscure. Search Engines Whether you're looking for specific science research or business data, these search engines will point you in the right direction. Turbo10: On Turbo10, you'll be able to search more than 800 deep web search engines at a time.

Top 10 Signs Of Evolution In Modern Man Humans Through history, as natural selection played its part in the development of modern man, many of the useful functions and parts of the human body become unnecessary. What is most fascinating is that many of these parts of the body still remain in some form so we can see the progress of evolution. This list covers the ten most significant evolutionary changes that have taken place – leaving signs behind them. Resources A sense of space and place www.geography.org.uk/download/GA_Conf10Barlow.ppt This presentation was given at the 2010 GA Annual Conference: Places are multi-layered, sensory, diverse and often complex spaces, given meaning and form through human interaction. In turn, places help define our identity and evoke a range of emotions. This workshop will explore techniques to help you bring places alive in the classroom and reflect on personal and shared meanings.

English Pronounciation Dearest creature in creation, Study English pronunciation. I will teach you in my verse Sounds like corpse, corps, horse, and worse. I will keep you, Susy, busy, Make your head with heat grow dizzy. Tear in eye, your dress will tear. So shall I! Oh hear my prayer. 21 Most Beautiful Nature Photos On Stumbleupon These are the 21 most beautiful nature photos on Stumbleupon. Stumbleupon is big society where you can spend all your day and all you life with smile on your face. On that site you can find lots of things, like photos, animals, home stuff and many more, nature photos like these one below. These nature photos are really beautiful and very amazing and that is the proof just how much our Earth is beautiful place.

10 Strange Things Your Mind Can Do 10 Ships with Unusual Large Cargo Heavy lift vessels are quite amazing vessels, built to load, carry and discharge large, unusual shaped cargoes (or even smaller vessels) that will simply not fit inside the holds of conventional vessels. Unusual cargoes can include power plants, submarines, desalination units,oil platform, generators and yachts. Continue reading

Yes, We Should Clone Neanderthals 30,000 years ago a Neanderthal woman died in what would become Croatia’s Vindija cave. Five years ago, 454 Life Sciences and the Max Planck Institute started working together on the tedious and time-consuming task of piecing her fossilized DNA back together. Just over a month ago, they succeeded and, in the process, revealed that most of us are between 1% and 4% Neanderthal. To crudely paraphrase the ever artful Carl Zimmer, knowing where Neanderthals fit into the evolution of Homo sapiens is essential to understanding the development of the human mind. Knowing where Neanderthals fit, however, also creates a problem. What do we do if what makes humans “human” isn’t from a “human” at all?

Easily Confused or Misused Words Some words sound so similar, it's easy to confuse or misuse them when writing. Computer spell check won't catch these mistakes! Use this list as a reference whenever you're unsure about which word fits in the context. Top 20 Earth Pictures found on Stumble Upon Everybody knows that Stumbleupon is an great source for beautiful photography, nature, pets, arts and much more. They have millions of users and they are probably the most wide used source for finding quality content. Today, we collected 20 popular photographs from Stumbleupon. Most of them have been seen for more than million times each. We hope you’ll enjoy… Photo Source

Tesla The history of technology is populated with a marvellous cast of characters. On the one hand you have the colourful, hard-working inventors like Thomas Edison who slaved away morning, noon and night to produce many of the wonders that we take for granted such as the incandescent light, the telephone, and the garlic peeler. On the other you have the moonbat crazies who show up at the patent office with a cardboard box stuffed with wires and a torch battery claiming that they've made contact with John Kerry's charisma. And then there is that rarest of creatures: Nikola Tesla, a man who was both a certifiable genius and just plain certifiable. Born in Smiljan, Croatia, Tesla was educated at Graz and Prague, worked for the Continental Edison Company in Paris, and emigrated to the United States in 1884.

:) I can barely keep up with the few pearl sections that I have now. Music expands rapidly. So does the Science and How To sections. Then there are the other sections I haven't had time to get back to in awhile. Happy Pearling L8trs by timepeaces Jul 25

"Imagine an electronic page for each species of organism on Earth..." - Edward O. Wilson by quitedragon Jul 21