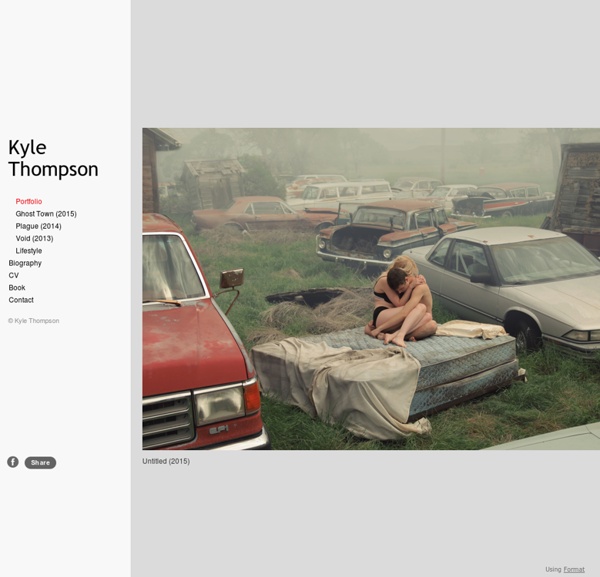 ​Lettres Grandes with Clémence Poésy As the sun sets on the banks of the Seine, Clémence Poésy settles into a vintage ride to read a love letter written by poet Paul Éluard, to his first wife, Gala, on Friday May 15, 1936, several years after she had left him for Salvador Dalí. Poésy takes on the tone of a modern-day Gala, a self-assured seductress, who was famously a muse to a whole slew of Surrealist artists and writers, including Max Ernst and André Breton. Reading the letter with a hint of regret, she stands firm by her decision to trade in the poet for the painter. Directed by Elsa Klughertz, the intention was to convey the sense of undated emotion that is tangible in personal letters.

Second Adolescence - Ben Gore Introduction to Second Adolescence by Alexander Norton "Being young is something precious. Each birthday that comes brings new challenges as our bodies change, our ideas evolve and our situations become greater. Our inner workings make us almost unrecognisable from when we were children. Wonderland - Kirsty Mitchell Photography <div style="position:fixed; top:0px; left:0px; z-index:3000; height:100%; width:100%; background-color:#FFFFFF"><br></br><div style="font-family: Tahoma; font-size: 14px; background-color:#FFFFCC; border: 1pt solid Black; padding: 10pt;">Sorry, you have Javascript Disabled! To see this page as it is meant to appear, please enable your Javascript! See instructions <a href=" Wonderland 'Wonderland' began in the summer of 2009 as small summer project born of grief for my mother Maureen, who died 7 months before in November 2008. What started as a distraction from the pain of reality, led to a dramatic 5 year adventure that would consequently change my entire life… (read more)

Agnieszka Rayss I photographed a process without which life Warsaw would be impossible. We draw water from beneath the Vistula and return it to the river. These places are seldom seen. Mysterious places, at the heart of the city, but un-urban, by the river, but hidden beyond thick growth.

Artist Collective Troika Flips Gravity at L.A.’s Kohn Gallery Relinquishing control is the central theme of London-based trio Troika’s “Cartography of Control.” It’s the first stateside show for the art and design collective formed by Conny Freyer, Eva Rucki and Sebastien Noel, who employ a distinctly scientific approach to their work. The eloquently heady exhibition, currently on view at Kohn Gallery’s 12,000-square-foot space in Hollywood, uses experimental procedures to question the really big stuff, like the laws of gravity or the path of least resistance. Though their work nods to mid-century mathematicians like Alan Turing and Einstein who were masters of prediction, Troika feel at ease leaving the outcome of their own experiments to fate. In Hierophany (2014), the trio attempts to replicate computer randomization by hand, on a human scale, through a tapestry-like mosaic of approximately 21,000 hand-laid black and white dice, for which they followed simple repetitive rules to organize the composition.

Jane Long - Dancing with Costica The Dancing with Costica series initially came about when I decided to brush up on my retouching skills. After finding the Costica Acsinte Archive on Flickr I became fascinated with the images and their subjects. I wanted to bring them to life. But more than that I wanted to give them a story. I wanted there to be some ambiguity about the images. Boston Area Graphic Design & Photography Now that we’ve introduced you to our new website we thought we should explain where our namesake comes from. As with any naming project we’re asked to approach, the name needs a few important attributes. Memorable: The name must be something succinct that is either unusual, different, or special. Ideally it would be all three.Creates a strong mental image: You know that look when a dog tilts his head when you say “cookie” or “walk”? This is what we’re talking about.

Tutorial: Creating a Surreal, Conceptual Photo Using 'Zone Lighting' In this tutorial I’d like to demonstrate that you don’t need expensive studio flashes to create a complex scene with subtle lighting. I haven’t yet seen anyone else do this quite the same way and there doesn’t seem to be a name for it, so I named the process “zone lighting”, a form of exposure blending by dividing the scene in different zones. But let’s start with a little bit of background about the project and its concept.